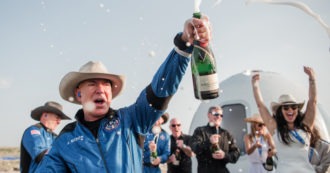 First quarter at a loss from 7 years for Amazon which closed the period January-March 2022 with a red of 3.8 billion dollars (3.6 billion euros) against the 8 billion profit that had characterized the same period of 2021. The figure is below analysts’ expectations and this caused a 9% collapse of the group’s stock in the “pre-market ”, With a capitalization loss of approximately 200 billion. The value of the founder’s participation Jeff Bezos it shrank by $ 13 billion in hours. The result would have been even worse if a tax credit of over one billion dollars. THE revenues rose from 108 to 116 billion dollars (there is also some effect of inflation) but they have also grown costs, which went from 99 to 112 billion. Costs have risen above all in the United States where they go from 60 to 70 billion dollars while in the rest of the world the increase does not reach one billion.

Amazon Europe, in 2021 revenues increased by 7 billion but zero euros in taxes. Indeed, the tax bonus of one billion arrives

The increase would be attributable to the rise in the cost of fuels that make it more expensive deliveries and more generous pay policies to attract workers. Amazon hired 780,000 people in the past two years to cope with the boom online sales (+ 39% only in 2020) related closure of traditional businesses due to pandemic containment measures It also increased i wages, paid bonuses for new hires and was willing to travel half-empty vans to make sure customers received their packages on time. Now that the “lockdown demand” slows down collections, they are struggling to cover the higher costs. Also weighs on the results loss of 7.6 billion attributable to the investment in the electric car manufacturing company Rivian.

The data on the flow of households is alarming, which marks a minus 18.6 billion in the 12 months ended in March against a positive flow of 26 billion in the same period of the previous year. Continue to “pull” the division Amazon web services (Aws), in essence, the cloud services of which Amazon is the first supplier in the world with Microsoft, which have guaranteed revenues of over 18 billion and an operating profit of 6.5 billion, two billion more than a year ago. The increase in AWS revenues is 37% but lower than the performance of competitors Microsoft and Google. The company explains in a note that “Pandemic e war in Ukraine made the context particularly challenging “.

USA, youth baseball game interrupted by a shooting: the images shot by a parent of a player – Video

Eni, profits quadrupled thanks to the super prices of gas and oil. Record results also for Exxon and Chevron