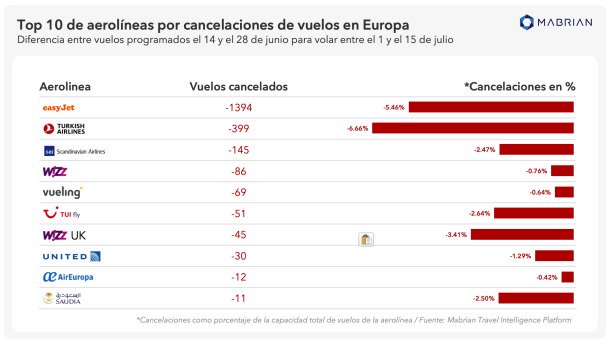 These are not easy days for someone who has booked one vacationbetween the peak of infections from Omicron and the strikes and flight cancellations that are hitting everyone Europe. In a few weeks, more than 41 thousand flights about 7 thousand in Italy have been canceled from European airports. But what are the flights and the airports more at risk? A online report elaborated by Mabrian Technologies analyzed i canceled flights in the main ones companies aerial by making a list of flights more at risk.

The Mabrian Technologies report took into consideration cancellations in the period 1-15 of July 2022, comparing the flights scheduled on June 14 with those actually available starting from June 28.

According to the data analyzed by Mabrian Technologies, the black jersey goes to the English low cost company EasyJetwith 1,394 flights canceled (5.46% of the total) a situation that also led to the resignation of operations chief Peter Bellew.

Second “classified” is Turkish Airlines which cut 399 flights (6.66% of the total). Problems also for Sas, with 145 fewer flights, it is facing an all-out strike by the pilots while the company has applied for bankruptcy protection. Things are not good for either Wizz Air86 flights canceled equal to 0.76% of the total.

Vueling and WizzAir, problems and inconveniences

The ranking includes only flights that have been canceled well in advance, and does not take into account last-minute cancellations made mainly by low cost airlines.

Which airports are most at risk?

Among the airports where the greatest inconveniences have occurred we find almost all the main European airports, but the worst is Paris – Charles de Gaulle.

In Paris 1 out of 5 flights canceled

In Paris – Charless de Gaulle nearly one in five flights (17%) was canceled. Problems with the baggage sorting system were also reported on Friday 1 July: over 1500 suitcases remained blocked and 15 flights departed without luggage.

London, problems at Heathrow and Gatwick

In British airports, chaos have been reported for weeks. At London’s main airport (Heathrow), a lack of ground staff has forced the cancellation of around 30 flights starting Thursday 30 June. A situation that has caused long queues, crowds and protests. In Gatwick, the UK Civil Aviation Authority has imposed a reduction in flights which in August will increase from over 900 daily flights to 850.

Disruptions also expected in Amsterdam Schiphol: passengers are required to show up 4 hours before the flight even for European flights. The authorities have imposed a limit on the number of daily flights, reducing the number of people passing through the airport by over 13 thousand. The limit was therefore set at 67,500 passengers per day for July and 72,500 for August.

Spain in chaos due to strikes

Things are no better for those traveling to Spain where the country’s major airports are in trouble due to strikes by Ryanair and EasyJet staff. Delays for over 100 flights and new strikes announced for EasyJet from 15 to 31 July.

Due to a lack of staff, the national airline Lufthansa canceled around 2,200 flights throughout the summer. Problems also in airports where the lack of ground staff is causing long lines at the controls.