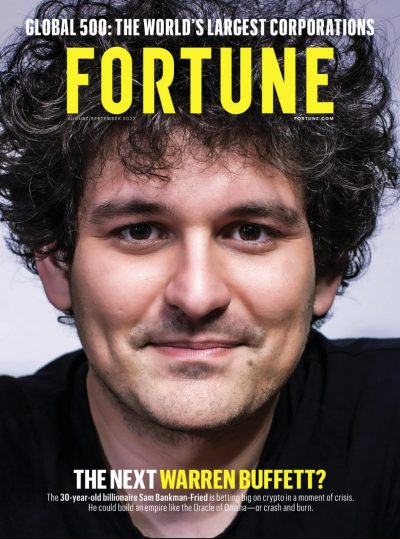 FTX, one of the world’s largest cryptocurrency exchanges, found itself in a matter of days from being one of the market leaders to go bankrupt. The reasons are mainly two: some wrong financial strategies on the part of the company, but above all the ingenuity of the founder who may have found himself involved in a power struggle with his main competitor. And that he might have missed it badly.

The cryptocurrency sector is known for its sudden disruptions, for prices that rise and fall very quickly, for entire holdings that vanish overnight. But even by its standards this story is something big, so much so that between experts and professionals, but also from the New York Times And from the Financial Timeshas been called the “Lehman moment” of the industry, a reference to the collapse of the investment bank Lehman Brothers in 2008, which caused a global financial crisis and which exposed all the vulnerabilities and unscrupulousness of Wall Street finance.

Most cryptocurrency exchanges around the world take place on two platforms, Binance and FTX. Of the two, Binance is the largest and is run by Changpeng Zhao, a Chinese billionaire known to the world as CZ. However, Binance’s operations are rather opaque: it does not have an official headquarters and has clashed with the financial authorities of many countries. Despite this it has been hugely successful and currently controls around half of the cryptocurrency exchange market.

FTX instead has its headquarters in the Bahamas and is managed by Sam Bankman-Fried, a 30-year-old American billionaire, also known for being a major donor to the US Democratic Party. In the United States FTX is better known than Binance, both because it spent a lot on advertising during the Super Bowl and on naming rights (for example, the Miami Heat NBA basketball team plays in an arena called FTX Arena), and because it organizes conferences and events attended by well-known personalities in American society, such as former president Bill Clinton and football player Tom Brady.

FTX was so far considered one of the most mature companies in the cryptocurrency environment, because it was stable and with solid capital, but also because it had managed to withstand difficult times for the sector. It helped save various cryptocurrency companies and was generally viewed by investors as a responsible company, which had never gotten involved in risky and speculative trading with client funds.

So much so that its founder, known above all as SBF (cryptocurrency operators love acronyms), enjoyed a good reputation both within the sector but also among traditional finance operators and US financial authorities. In fact, it has become the symbol of the maturity of cryptocurrencies, which since their existence have always aroused a lot of distrust in the financial world. Magazine Fortune it even had dedicated a cover titled “The Next Warren Buffett?”, comparing him to the best known and most successful US investor ever.

The cover of Fortune magazine dedicated to the founder of FTX

Bankman-Fried has also recently engaged in heavy lobbying on the US legislature to start regulating the industry a little more. It’s a very common practice in the United States and perfectly legal: companies spend millions of dollars on lobbying and lobbyists, who are usually very well-established in the political milieu, put pressure on institutions to promote laws and regulations in favor of the interests of the group they represent.

This intense lobbying activity was judged to be highly controversial within the industry. While some agreed with the need for greater regulation of the cryptocurrency world, also useful for taking away the reputation of amateurish and dangerous finance, others accused Bankman-Fried of only serving his interests and pushing for laws that would only harm. its competitors.

Among those against the regulation is Changpeng Zhao, the founder of Binance, the main competitor of FTX. He is a diametrically opposite figure to that of Bankman-Fried. His company has always tried to operate outside the box and rules of traditional finance, so much so that Binance has been banned from several countries for acting without adequate licenses.

Zhao and Bankman-Fried were friends and were also partners: Binance was one of the first investors in FTX and had sold its stake last year, receiving in exchange a large number of “FTT tokens”, that is (simplifying) the cryptocurrency created by FTX. The two drifted apart as their visions and corporate goals diverged: Bankman-Fried wanted to institutionalize the industry, while Zhao still wants to operate as an alternative to finance and not as a component of it.

Now the two are officially fighting over this intense lobbying activity. “We will not support people who lobby other industry leaders behind their backs”, wrote Zhao on Twitter.

Wednesday 2nd November Coindeska major industry news site, published an article in which he revealed the contents of some confidential documents on the activities of FTX and Alameda Research, another Bankman-Fried company that deals with financial trading. From the documents it emerges that in the accounts of Alameda there is a huge capital made up of many “FTT tokens”, ie the cryptocurrency created by FTX itself. In itself this is nothing wrong or illegal, but in fact it shows that the strength of Bankman-Fried’s trading firm rests on a foundation made up largely of money created by his own company, and not an independent resource. .

This news created a lot of turmoil in the market because the reliability and soundness of the accounts of FTX and Alameda were questioned.

Concerns were also fueled by the fact that Zhao publicly announced that Binance would get rid of all FTT tokens held by the company, due to the “recent revelations”. The announcement plunged the value of FTT tokens and sparked suspicion among observers that it could have been Zhao himself who divulged the document.

As part of Binance’s exit from FTX equity last year, Binance received roughly $ 2.1 billion USD equivalent in cash (BUSD and FTT). Due to recent revelations that have came to light, we have decided to liquidate any remaining FTT on our books. 1/4

This triggered a crisis of confidence in FTX: fearing they would lose their money, within a few days the investors withdrew more than 6 billion dollars that they held in the form of FTT tokens. The company thus found itself looking for funds to fulfill its obligations to convert cryptocurrency into dollars. Finally, the company had to block conversion requests because it was no longer able to deal with them, thus finding itself in the most serious situation in which a financial company can find itself (like a bank that blocks customer requests to withdraw money from their current accounts. ).

Bankman-Fried tried to reassure investors, but the panic continued and the founder of FTX announced that he would sell his company to Zhao and Binance, who had made themselves available to rescue it.

1) Hey all: I have a few announcements to make.

Things have come full circle, and ‘s first, and last, investors are the same: we have come to an agreement on a strategic transaction with Binance for (pending DD etc.).

But the day after the announcement, Binance changed its mind and said it would withdraw from the deal, explaining that after reviewing the company’s books, it came to the conclusion that “FTX’s problems are beyond our control or of our ability to help “.

As a result of corporate due diligence, as well as the latest news reports regarding mishandled customer funds and alleged US agency investigations, we have decided that we will not pursue the potential acquisition of https://t.co/FQ3MIG381f.

FTX filed for bankruptcy on Friday and Bankman-Fried resigned as CEO.

All of this took place in real time on Twitter, where both Zhao and Bankman-Fried are very active. The latter in the past few days has publicly apologized several times for not having taken better precautions.

I fucked up, and should have done better.

The sudden collapse of FTX has raised many questions about the future of cryptocurrencies. First, what will happen to FTX customers and their money. Unlike deposits in a traditional checking account, deposits on cryptocurrency exchanges are not guaranteed by the state and it is not known whether FTX has sufficient resources to return everything. With the bankruptcy petition presented by the company, the matter will move to court.

The story had an impact on the entire market. In fact, the value of many cryptocurrencies has dropped significantly in recent days: for example, Bitcoin has lost 22 percent of its value since Monday. FTX investors are likely to lose most of their investments. Among them there were also some large and well-known companies of venture capitali.e. companies that professionally invest in other companies, such as Sequoia Capital, Lightspeed Venture Partners and SoftBank.

The scale of this affair is huge for the cryptocurrency sector, which has lost one of its main institutions. Many observers compare it to the bankruptcy of Lehman Brothers, a large American investment bank that in 2008 found itself bankrupt after very risky speculative investments. From there began the biggest financial crisis in history.

Contrary to 2008, when the Wall Street crash spawned a global financial crisis that led to millions of Americans losing their jobs and homes, the fallout from the FTX crash should remain within the cryptocurrency industry. The affair will also likely have a major impact on the sector’s regulatory activities: Bankman-Fried was trying to persuade those authorities still skeptical about the potential of cryptocurrencies to better regulate the sector, but now they will have another reason to believe the sector out of control and potentially dangerous for investors.

– Read also: In the face of crises, the “crypto bros” form a group

Has the “Lehman time” for cryptocurrencies arrived? – The post