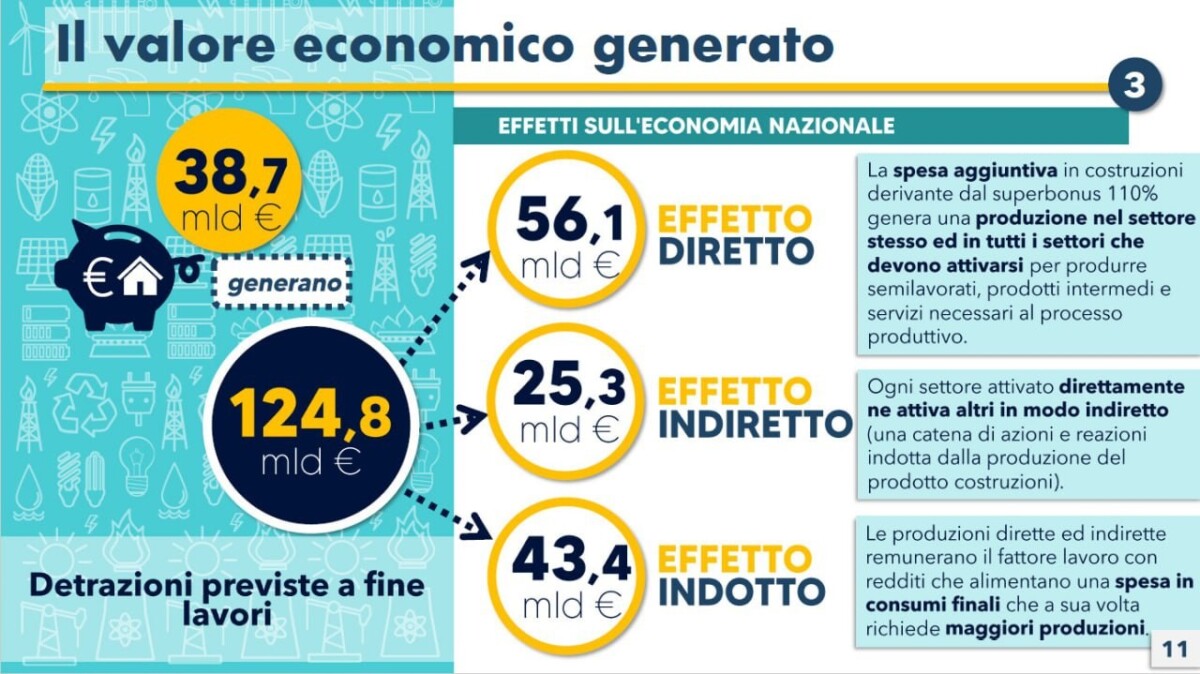 The President of the Council Giorgia Meloni stated in press conference on November 11, 2022, reiterating the concept also in the most recent one of 22 November: “On the Superbonus I mean that it was meritoriously born as a measure to help the economy, but the way it was implemented created many problems. To those who said that you could renovate your apartment building for free, I remember that it cost the state 60 billion, with a gap of 38. Let’s say that the concept of free is bizarre”.

The idea that the Superbonus is a excessive cost to the state it is powered by the Draghi government, and has its own fund of truth. In fact, the principle of prudence in drafting the State budget requires that certain reductions in future revenues be considered 100%, also identifying adequate financial coverage, but does not allow for revenue increases to be considered, considered uncertain and difficult to quantify with precision.

However, this determines the magical appearance of “little treasures” which are generated by the arrival of these unforeseen but now secure tax revenues.

Several studies on the Superbonus have analyzed real data and the economy that has been generated, arriving at the conclusion that the impact on state coffers is very low or even positive.

1. There Luiss Business School and OpenEconomics they did a study commissioned by the Government which can be found on the website of the Presidency of the Council.

The conclusions are that “compared to an increase in housing construction expenditure of 8.75 billion in the three-year period 2020-2022, there would be an increase in the overall added value for the country of 16.64 billion in the period of implementation of the provision and a further increase of 13.71 billion in the following 8 years against a discounted net impact on the public deficit equal to -811 million euro”. According to this study, the economic multiplier is (16.64+13.71)/8.75=3.5 and the cost to the State is almost nil.

2. Nomisma, company founded by Prodi and Andreatta, which carries out market research and consultancy, has done a study entitled “Social and Environmental Report of the Superbonus 110%” which was promoted by ANCE Emilia.

The conclusions of this study are that for 38.7 billion euros of tax credits granted, much greater economic value has been generated, for direct, indirect and induced effects, equal to 124.8 billion euros, with an economic multiplier of 3.2. Therefore, considering even just 1/3 of the taxes paid on this economy generated by the Superbonus, we will have higher tax revenues in the first few years, exceeding 40 billion euros, which completely compensates for the lost future revenue of 38.7 billion euros .

The advantages of the Superbonus

Both of them studies by the Luiss Business School and Nomisma arrive at very similar conclusions which in any case clearly highlight that the Superbonus is not a cost for the State because it produces economic growth that has a high economic multiplier.

In fact, the Superbonus 110% is the granting, by the State, of tax credits on future taxes, to those who renovate their property with certain characteristics and ceilings, which determines a cost for the citizen equal to zero on these interventions. But the real novelty is the possibility of transferring tax creditseven in the bank to change them into euros, because this allows them to be used even by those who do not have fiscal capacity and by circulating they determine more economy and exchanges, with an immediate return for the State in terms of taxes.

The granting of tax credits is not a cost for the State, it is only a loss of future revenue of 60 billion euros spread over 5 years. But it also produces an increase in tax revenue in the first few years, because in order to have tax credits it is necessary to have carried out the works and to have issued invoices, on which the company will pay VAT and other taxes in the 1st year, but will pay also employees and suppliers (other VAT, taxes and contributions).

And then there are direct, indirect and induced effects in the economy analyzed by Nomisma and Luiss Business School, for which a greater economy is generated with a multiplier greater than 3, and consequently an increase in the payment of taxes and contributions, which partially or totally compensates for the lost future revenue.

Furthermore, there is also a macroeconomic advantage, that of an increase in GDP without an increase in public debt, given that the tax credit is only a future loss of revenue. So the debt/GDP ratio drops a lot, because the debt in the numerator remains unchanged while the GDP in the denominator grows, making the public debt and compliance with the Maastricht constraints more sustainable.

To amplify the increase in GDP and tax revenues in the early years, it is essential to leave and improve the transferability of tax credits, because if blocked or limited, as the Draghi Government undoubtedly did, it greatly reduces these extremely positive effects for the state and citizens.

The Superbonus 110% is not a cost for the State because the transfer of the tax credit determines a high economic multiplier, capable of generating economic growth and an increase in GDP that produce greater tax revenues in the first few years, capable of offset or at least greatly reduce this cost.

The other advantage consists in the fact that the concessions granted by the State do not generate public debt because the tax credits, even if transferable, never represent an obligation for the State, and therefore a debt.

But we agree with the Minister of Economy and Finance Giancarlo Giorgettithe Superbonus is a measure that benefits the richest part of the population, that of private property owners, so it should be better calibrated, leaving it only for the first home and for those with medium-low incomes, reducing it in other cases.

But the Superbonus would be much more interesting and better used if it were used to improve energy efficiency and seismic safety of public buildings such as Municipalities, schools and hospitals, or for the construction of social housing, because it would allow us to enhance our public assets, reducing future costs, but without increasing deficits and public debt.

Is the Superbonus really a cost to the State?