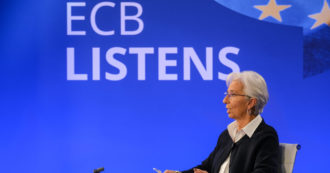 The enthusiasm of the markets for the statements by the Federal Reserve did not last long, which yesterday, after raising rates by 0.5%, ruled out that the next hike, expected in June, can be 0.75% as proposed by some analysts. Yesterday on Wall Street the S&P 500 index had closed at + 3% but the gains were canceled from today’s session, in marked red both in the United States and in Europe. The Eurostoxx 600 index fell by 0.8%, piazza Affari closed down by 0.6% after an upward first half of the session. The performance of the Ten-year BTPs exceeded 3%. The hike decided yesterday by the US central bank has brought the cost of money at 1%. It is also the largest increase of the last 22 years old. At the same time, the Fed announced a new reduction in the volume of purchases of securities. Today has also moved Bank of England decided a new rise in interest rates, bringing them from 0.75% to 1%. The decision was expected and is being explained by the UK central institution as a measure to counter the record rise in inflation in the UK. The central bank warns that this year British inflation could reach 10%.

The increase in rates it was expected by analysts and markets and it is a further step in the Fed’s monetary tightening strategy to counter inflation rise in the US up to 8.5%. Rates had been raised by 0.25% last March. Raising rates is one way to make money more expensive. Getting a loan becomes more expensive and the money in circulation decreases while the quantity of goods on the market does not. This produces a downward pressure on consumer prices but it has the side effect of slowing economic growth. In the first quarter of 2022, the gross domestic product Usa suffered a contraction 1.4%an unexpected retreat that could lead the Fed to soften its moves.

“I want to speak directly to the Americans: inflation is too high and it is essential to lower it” to ensure a recovery that benefits everyone, the Fed president said yesterday. Jerome Powell, in his first press conference in attendance nearly two years. The Fed “has the tools to reduce inflation and is moving quickly to lower it.” More hikes of half a percentage point are “on the table” for upcoming meetings, he said, but the central bank “Does not actively consider” a possible 75-point rate hike base in June. The US economy is doing well: “We expect solid growth this year” and nothing suggests that “we are close to or vulnerable to a recession,” Powell pointed out, explaining that there is a good chance of restoring price stability without a recession. In any case, he admitted, the tools at the Fed’s disposal are not precision tools.

Markets, German Bund yield at 1% for the first time in 8 years. Italian BTPs now at 2.9%

US trade deficit above 100 billion – The Fed’s restrictive policy is also behind the race of the dollar in recent weeks and the rise in yields of US government bonds. A ten year pays about il 3%. The data on the American trade deficit (difference between the value of exports and imports) was released yesterday, which in March increased by 22.3% to 109.8 billion dollars, the greater red than ever and for the first time above i 100 billion. A figure worse than analysts’ expectations. Imports rose by 10.3% to 351.52 billionwhile exports increased by 5.6% a 241.7 billion.