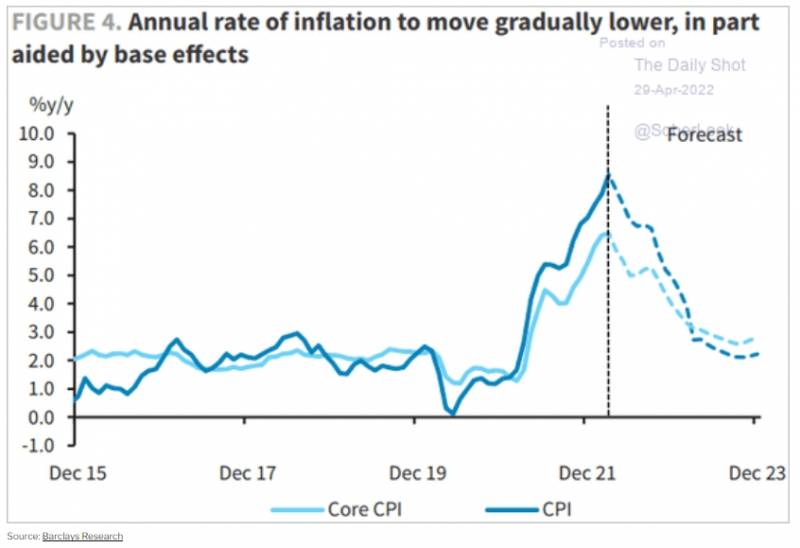 Other than transitory inflation. I went to eat pizza on Saturday night in the town where I live in the province of Modena and a diner, well versed in pizzerias, confirmed to me that the prices of pizzas have now grown everywhere by + 20% and passes. I paid 11 euros, it is said 11 euros for a pizza that I could cook for 3 euros in the electric oven of my house. They tell me that now in the centers of a certain size, if you want a pizza, you can pay for it comfortably from 8 and 9 euros upwards. The history of pizza tells me that inflation doesn’t stop there. And every time I see a forecast chart like the one I reproduce below, relating to US inflation, it makes me smile: but how can anyone who makes such a forecast think they can guess the top of the inflation curve as a expert shooter with the pistol the target at the range?

Years ago I read in the Espresso an undeniable article on the formation of the state budget forecast: how does the state predict GDP and therefore how many taxes, which are proportional to GDP, will it collect ‘So how much can it afford to spend? The article basically said that it was decided “by nose” as yes there is a macroeconomic model but then in reality no one has faith in the model and therefore you decide by sucking your finger and raising it to the sky to feel where the air is blowing. I do not know if it is true or not or if times have changed, I know that in terms of forecasts, having ideas even against the tide does not hurt because even the macroecnomic data are trend following so if you are in the traced groove you are not very wrong. But you are wrong if you go against the trend, like the graph I showed above, which predicts that on a particular spring night here is that the trend reverses.

We are in a situation in which investment flows in stocks are slowing down as shown by the following graph as well as the other various crises that have occurred over the last 20 years:

On the Nasdaq we had a very bad closing last Friday and I expect that we will have a very thoughtful Monday and the same also on Tuesday. We are straddling an important support at 12,000 that it should hold and if it gives up we are faced with a decline that does not end the next day.

The negative closing on Friday will also impact our Ftse All Share index which is destined to suffer even if I do not see particular collapses, I see a descent between powerful rebounds up to 23,000 but without dramas and without worries. Rising inflation means rising rates and this must be incorporated into stock prices.

At the level of shares, today we are talking about Terna, a share that is not such but is more an obligation than anything else. This action has been reported by ITI among the top positions for some time. The Independent Trend Index is a selection indicator of Italian stocks available to all readers free of charge every evening at 19.30 click here >> Terna has a price slightly above fair value (approximately + 10% according to the discounted cash flow method). Turnover grew by 4.6%, EBITDA by 2.4%, the dividend rose to 29 cents per share, an increase of 8%. A money machine. If we notice the chart is entering a “speculative” phase of 90 degree growth and we expect at least one more bullish leg. It is to be taken as soon as he raises his head.

Pizza costs more and more: inflation is not transitory