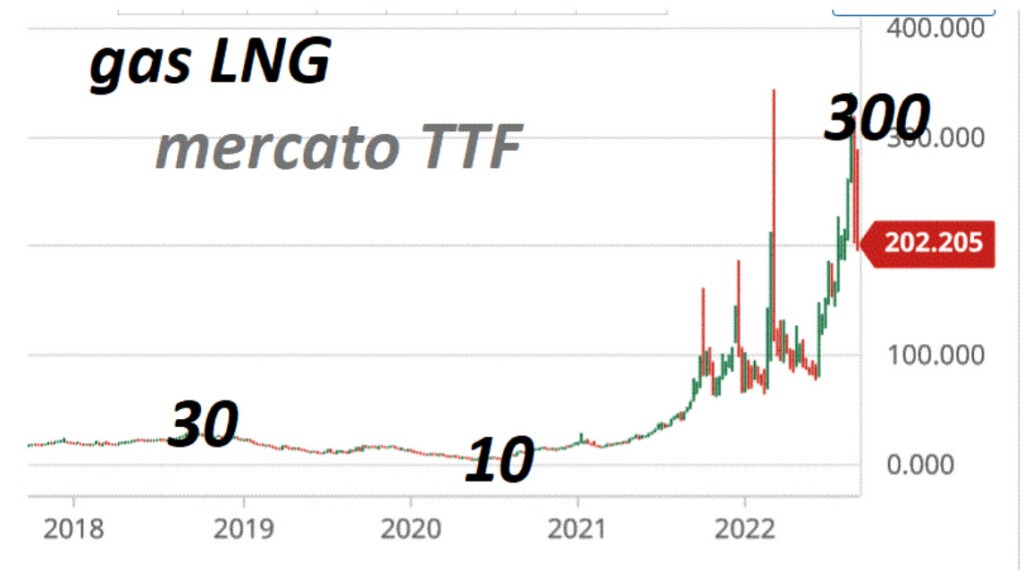 In this Twitter audio “room” what is perhaps the foremost energy expert in America, prof. Anas Alhajji he discusses the energy market today in front of 50 thousand listeners on twitter and explains how the Chinese buy Russian LNG gas with contracts and then resell it to Europeans on the TTF market.

This is the famous Ttf del market liquefied gas and sent by ship to the Netherlands:

In short, the Chinese pay perhaps the equivalent of 50 euros / MWh (the exact price is unknown) and then the tanker who transports it instead of China goes to the Netherlands to resell it to the Ttf to Europeans at 200 euros / MWh.

This famous “Ttf” liquefied gas market (called “Lng” in English and LNG in Italian) is a market for gas futures contractswhere you can either speculate (buy and sell without having the gas delivered to you) or “book” a physical delivery of gas for the next few months.

Note that for example the expert of Nomisma of energy, Tabarelli, has explained several times in the newspapers that it costs the Russians about 10 euros / MWh to produce gas. Then it is liquefied and shipped by ship and this obviously adds a few more euros per MWh of cost. But we are talking about 20% from what we read, so the gas that costs the Russians 10 euros to extract, liquefied and transported by ship will cost about 12 euros.

The Russians sell it to the Chinese with a contract (not on a “market” of derivative contracts such as the Ttf and its Asian equivalent which is called “Jkh”). Obviously nobody says what the exact price is, but if it were even 50 euros or even just 30 euros they would earn well. And if the Chinese resell it in Europe for 200 euros, they make a bundle of money.

Perhaps we are not fully aware of the fact that for twenty years the gas cost on the markets or in the contracts about 20 or 30 euros per MWh. From this summer there is talk of selling it for 200 or 300 euros in Europe liquefied and transported by ship.

Those who now resell liquefied gas in Europe get richer than even the sheikhs ever could, because the price of oil from the 1970s onwards has sometimes doubled and sometimes tripled, but it has never increased tenfold as it is now. gas in Europe.

In this liquefied gas traffic which is being resold in Europe, the Russians and the Chinese are very happy. Even the Americans who sell it to the TTF are happy because they cost the equivalent of about 20 euros per MWh (equivalent to $ 6-7 per MBtu, which is the American unit of measurement).

To be precise, the traffic of Chinese people who buy liquefied Russian gas through contracts and then bring it to the Netherlands to resell it is currently limited because the Russians for now do not have much capacity to liquefy gas. Until now Gazprom sold around 90% via pipelines because it costs much less and is cheaper. But at tenfold prices it is enough to sell even a little and you can make money as before even if the gas sent by pipeline to Europe is reduced to zero.

Then now everyone in the world threw themselves into building terminals to liquefy and regasify the gas to send it by ship. Even the Russians in a year or two will be able to liquefy more. Russian gas is the cheapest in the world to extract (it costs less than half the US and 20% less than the Algerian) so it will always find someone in India or China or Japan who wants it.

We are obviously summarizing the complicated problems of the energy market, but in our opinion the flaw of the analysis of the experts in the newspapers is that they never get to the heart and confuse ideas a lot. The fact of the matter is that by imposing an embargo on Russia and seizing about 500 billion of its accounts and assets and By throwing ourselves into buying liquefied gas, we have increased the price of gas by 10 times. So far the Russians have made more money, the Americans make more money, the Asians are buying Russian oil and gas at much lower prices than ours. The only certain thing is that we Europeans and we Italians, under the wise guidance of our rulers, on the other hand, pay ten times as much for energy and we are ruining ourselves.