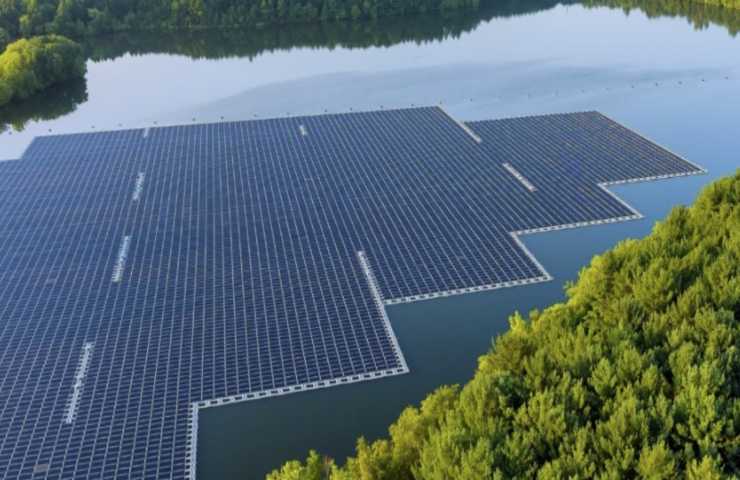 Floating photovoltaic system: there is the project for the construction of the first in Piedmont. Here’s where and how it will be

The investment on renewable energies it is continuous and increasing. It is clear that this is the only possible way to reach the goal of zero emissions established by the European Union in 2050 and a significant reduction, hopefully more than 50%, by 2030.

The European stakes have been set and they are adamant, it is up to us to work to ensure that the objectives are realized. In Italy, the amount of work concentrated on this sector is great, from continuous investments in green energy for greater development to the realization of innovative systems that lead the way to the energies of tomorrow.

In Piedmont, for example, the first floating photovoltaic system. The project bears the signature of an Italian company and is really interesting. Let’s find out everything in detail.

It will be there Piedmont the Italian region to host the first floating photovoltaic system. This is one of the innovative energy solutions that the company Cohesive is planning in the name ofenergy efficiency.

YOU MAY ALSO BE INTERESTED IN -> Solar panels, cleaning them is very simple: the practical and economical guide

The plant will be built in the basin of Cava Germaire, between Carignano and Carmagnola, which is being phased out. The company founded in Turin in 2012 by two newly graduated engineers from the Polytechnic, Federico Sandrone and Dario Costanzowill carry out the preliminary study on the area, the design and construction of the work which, according to the project, will be able to eliminate 3,500 tons from carbon dioxide toyear.

Cohesive who has been involved in ecological transition for ten years and explained that a floating photovoltaic system has so many benefits: it allows to leave the ground free from fixed structures and at the same time allows to increase energy production. How? Sandrone, CEO of the company, explained this directly, focusing on the functioning of the photovoltaic panel in the water. “Contrary to what many think, in August it produces less than in June because it overheats – he specified – On the water, however, there is no problem because it is cooled. Furthermore, the floating panel uses all the refraction of the light that bounces off the surface of the reservoir ”.

YOU MAY ALSO BE INTERESTED IN -> Lamp post turbine: green innovation to illuminate the streets comes from Germany

The Turin-based company also thinks about protecting the surrounding environment by ensuring that the system does not interfere with the balance of the environment. For this reason, the panels will be at least 50 meters away from the shores, where birds nest, and each row will be spaced 5 meters apart so as not to create shade on the lake.

The first floating photovoltaic plant is in Piedmont: the Italian company that looks to the future