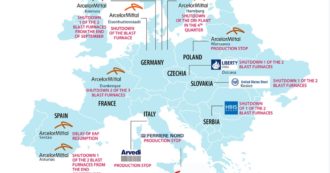 Based on the current long-term gas price curve, Italian households are likely to receive in 2023 bills since about 500 euros per month. Monstre figure destined to further increase to exceed 590 euros – 402 for gas and 193 for electricity – in the event of a complete interruption of the Russian flows, which for now continue to flow at the border crossing Tarvisio but in a smaller quantity of a third compared to spring. The calculations come from Goldman Sachswhich in a report on the European energy crisis warns that the markets are underestimating the consequences of this shock, which will be “even more profound than oil crisis of the 70s“. And he takes Italy as an example.

Alberto Gandolfi and Mafalda Pombeiro, who sign the analysis, estimate that in the worst-case scenario – gas a 400 euros per megawatt hour – European families will pay next year to heat and light their homes 4 trillion euros more compared to 2021, the 30% of the European GDP. At current prices, which see one-year futures on the Ttf in Amsterdam just over 220 euros / Mwh, the bill would be 2 thousand billion. Always at current prices, the weight of energy on disposable income in Germany, Spain, France and Italy it would increase on average from 8% in 2021 to 15% in 2022 to reach an incredible 23% in 2023. For the citizens of the Peninsula, the percentage is evidently higher, considering that the gross disposable income per capita (also taking into account public transfers) in 2021 was according to the Treasury of 22,600 EUR and the bills according to previous estimates would come to eat further 6 thousand euros a year.

How to intervene? Putting a ceiling on the price of electricity by “unhooking” the prices of that produced by renewables from that which derives from gas – one of the proposals that will be discussed on Friday by European energy ministers – could, according to the report, save up to € 650 billion to consumers: a decidedly partial relief. The investment bank makes another proposal: a “tariff deficit“That allows to distribute the increase in bills over a 10-20 year horizon. It would be a matter of fixing the tariffs of the protected market at a lower cost level and spread the outlay, in fact.

Also in this case the graph included in the paper refers precisely to Italy. And it shows how an intervention of this type would gradually increase the paid bill of households, peaking at about 450 euros per month in 2040. On the contrary, in the current situation the sting would arrive as already seen next year. Obviously the hole should be filled in some way: Goldman’s hypothesis is to allow the securitization (sale) of those credits, so that they do not weigh excessively on the balance sheets of dealers of energy. It goes without saying that for financial operators it would be an interesting business.

Supporting ilfattoquotidiano.it means allowing us to continue publishing an online newspaper full of news and insights.

But also to be an active part of a community with ideas, testimonies and participation. Support us now.