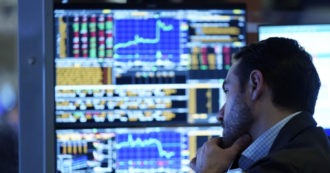 The spread, the yield differential between an Italian ten-year government bond and the German equivalent, which is now close to 190 points, closes up again. A 10-year BTP pays 2.86% today, or 08% more than yesterday. Especially almost 0.8% more than a month ago and 1.9% more than a year ago. Yields rose today across the euro zone but no rise had the breadth of the Italian one. German stocks increased by 3 basis points (0.03%), as did French and Greek stocks. For Spain and Portugal, the increase was 4 points. A German bundtaken as a reference term in the calculation of spreads as it is theoretically considered an asset a zero risk, pay 0.96% today up 1.1% compared to a year ago when rates were negative.

The slow and silent rise in the spread on the highs for almost 2 years. A ten-year BTP now yields over 2.5%

The inflationary environment and the prospects for a monetary strategy by the European Central Bank. If rates were to rise, the newly issued bonds would be placed on the market with higher interest rates. This causes the outstanding securities to be traded at to align lower prices. The interest they offer is in fact fixed in absolute value but expressed as a percentage of the value of the security. If protracted, the increase in rates is destined to make it heavier for the public purse the service of the public debt, ie the amount of interest that is paid each year on government bonds in circulation. Thanks to the particularly favorable conditions, Italian interest expenditure had decreased in recent years from 75 to less than 60 billion euros. The recovery of inflation helps public finances which benefits all debtors. The sums to be repaid lose their real value more quickly.

The other great phenomenon that is characterizing the markets is the progressive strengthening of the dollar. Since the beginning of the year, the US currency has strengthened by about 12% against the euro, also gaining value against the yen and sterling. To buy one euro today you need $ 1.05, before the Russian invasion it was 1.13. Also supporting the dollar are the prospects of an imminent US rate hike, which is already expected next Wednesday. Some traders consider it possible to achieve one in the short term full euro-dollar parity. The US currency is used in 65% of global trade, followed by the euro which covers a share of 20%.

EU: “Guidelines on the payment of Russian gas soon”. The Politico website: “Cingolani opens to the use of rubles”, the ministry denies

The spread widens further (190), yields on ten-year BTPs at 2.86%. The dollar “sniffs” parity with the euro – Il Fatto Quotidiano