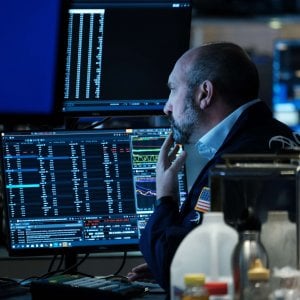 MILAN – Day in trouble for the stock markets, worried by the repercussions of the Chinese lockdown on global supply chains and after a start to the year which – for the S & P500 – represented the worst since 1939: a loss of 13% in the four months of 2022, compared to -17% at the time. There is not only the cloud on the prospects of investors war in Ukrainewhich in addition to the humanitarian drama has reopened the wounds of the energy market, but also the new wave of Covid in China and the succession of monetary tightening by central banks, which must try to extinguish the fire of inflation.

An unexpected situation complicated the picture: a “flash crash”, a sudden wave of sales that has spread probably starting from the markets of Northern Europe, in particular from the Swedish one which has gone down to 8% in a few minutes. Oslo and Copenhagen were other very affected stock exchanges, at first it was thought that the origin of the collapse depended precisely on Oslo but Euronext Oslo explained that it was examining the causes of the movement, which at the moment is inexplicable. The main European squares also suffered the blow, with Piazza Affari momentarily slipping down to -3.5%. The movements then partially subsided, but the underlying weakness remained. As the closing of the session approaches, Milan marks a decrease of 1.63%, Paris drops 1.66%, Frankfurt 1.11% while London remains closed for holidays.

“Flash crash” of the European stock exchanges, war and nerves on the edge of the skin behind the sudden fall of the lists

Wall Street opens the first session of May weak and uncertain, after Black Friday (-4.1%) of the technological list: at the end of trading in the Old Continent, the Dow Jones drops 0.4%, the S&P 500 0.1 % and the Nasdaq is flat.

This week it’s up to Fed and according to analysts we are moving towards a rise in rates of at least half a percentage point. But looking at market expectations (futures – Deutsche Bank writes – indicate a rise of 51.8 points) there is also someone who bets on something more. A dynamic that brings the dollar to renew its strength: the common currency is losing ground against the dollar at 1.0526 (-0.15%), awaiting the meeting of the Fed on Wednesday that will decide on the rise in US rates. The euro, on the other hand, rises against the yen to 137.00, while the dollar against the yen gains 0.26% at 130.16.

Meanwhile China published the PMI manufacturing index on Saturday which shows that industrial activity contracted for a second month at its lowest level since February 2020 due to lockdowns for Covid cases. Today, however, it emerged that in April the ESI index (Economic Sentiment Indicator, which measures the confidence of businesses and consumers in the EU economy) fell both in the European Union (to 104.9, or 1.7 points less compared to the previous month) and in the Eurozone (at 105, also in this case with 1.7 points less than the previous month). However, the indicator relating to Italy marked a positive figure of 1.3 points compared to March. Among the major economies of the EU, the ESI fell significantly in Spain (-4.5) and to a lesser extent in France (-1.4). Confidence remained broadly stable in Germany (-0.1), the Netherlands (-0.1) and Poland (+0.3).

It continues to widen it spread between BTPs and German Bunds: the spread remains under pressure like the yields of other European government bonds and is at 188.7 at the close after having broken through 190. The rate of return is up, to 2.845% but reached 2.9%.

The Japanese manufacturing sector recorded a solid, albeit slowing, trend at the beginning of the second quarter of 2022, according to April data. Firms reported a slowdown in inbound business expansion while growth in production levels remained broadly unchanged over the month. Pending the Italian data, the double-digit decline in sales of new vehicles continued in Japan: eighth consecutive month (-15% year on year), according to data from the association of car dealers Jada. There Tokyo Stock Exchange it fluctuated above and below parity, eventually closing weakly down 0.1%.

From the Old Continent it is registered the decline in retail sales in Germany which in March decreased by 0.1% on the previous month. The decrease on the previous year is 2.7%. The consensus saw growth of 0.3%. In February the figure had seen an increase of 0.3%.

The weak scenario affects the prices of petrolium which slid 3% in the morning, retreating further from the recent peak as concerns about slowing economic growth in China, the main crude oil importer, outweighed fears of supply disruptions due to the looming EU ban on Russian oil. WTI futures lost 3.13% to 101.41 dollars a barrel, Brent futures lost 2.7 to 104.28 dollars.

The stock exchanges today, May 2nd. The lists exceeded the “flash crash” of mid-morning, but closed down: China and the Fed are worrying