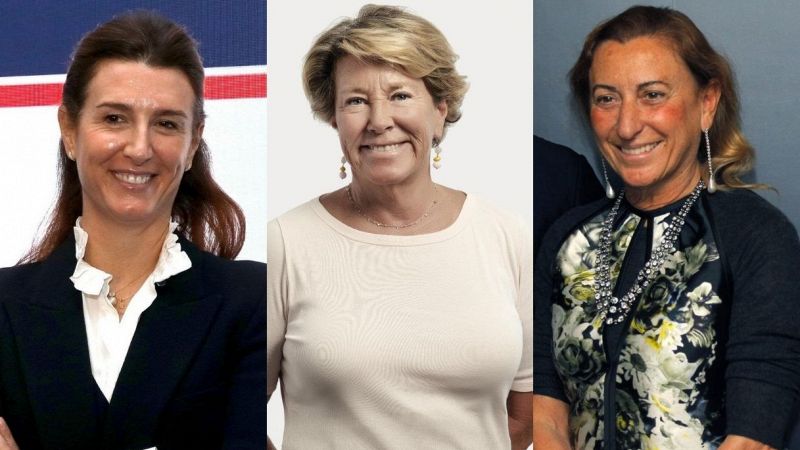 Forbes drew up the new ranking of Italian billionaires. On a general level, Giovanni Ferrero is confirmed the richest man in Italy with assets of 36.2 billion dollars, ahead of Leonardo Del Vecchio, Giorgio Armani and Silvio Berlusconi. The Forbes ranking also allows you to find out what the richer women of our country.

The richest women in Italy

The first is Massimiliana Landini Aleotti which occupies the fifth position of the general classification. The owner of the pharmaceutical company Menarini has assets of 5.4 billion euros. In 2016 Landini Aleotti was already included in the top ten of the most influential women on the planet.

In second place in the ranking of the richest women in Italy we find Miuccia Prada: the assets of the Milanese stylist and entrepreneur who heads the Prada brand together with her husband Patrizio Bertelli is 4 billion dollars. Prada in 2021 obtained the fifth place in the ranking of most loved brands in Italy according to Talkwalker, a multinational of Social Listening and Analytics.

Scrolling down the ranking, in third place there is Susan Carol Holland, president and daughter of the founder of Amplifon, with assets of 3.8 billion. Fourth position for Alessandra Garavoglia of the Campari Group, fifth position for Isabella Seràgnoli, entrepreneur and president of the MAST Foundation.

With assets of 1.3 billion euros, Simona Giorgetta occupies position number 14. Entrepreneur in the chemical and construction sector in the Mapei company and main shareholder of the Group leader in building materials, Giorgetta at the beginning of 2022 was included in first place in the ranking of the youngest billionaires in Italy.

To close the ranking of the richest women in Italy according to Forbes there are Veronica Squinzi and Stefania Triva, the latter managing director of Copan, the company that produced the swabs used as an anti-Covid test. Copan, in 2003, invented and placed on the market the “flocked” swabs, swabs studded with tiny synthetic fibers, which have the advantage of releasing 80% of the sample taken from the nostrils of the subjects to ascertain the presence of the virus , while the classic non-flocked pads collect and release only 20% of the sample. The heritage of Stefania Triva is 1.2 billion euros.

As for the general classification, there are two women in the top ten: Massimiliana Landini Aleotti, fifth behind Giovanni Ferrero, Leonardo Del Vecchio, Giorgio Armani and Silvio Berlusconi, and Miuccia Prada who occupies the tenth place and is preceded by Giuseppe De Longhi and family, Piero Ferrari, Augusto and Giorgio Perfetti and Patrizio Bertelli.

The ranking of the richest women in Italy

Who are the richest women in Italy: new ranking