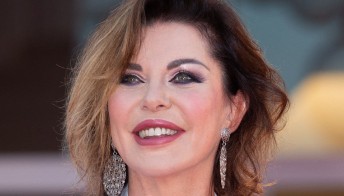 She had been spotted several times by the paparazzi in sweet company, but up to this moment the official report had not arrived. Now Alba Parietti speaks for the first time about her relationship with her new partner, a love that has only blossomed for some time and confirmed by the same showgirl after the numerous shots that portrayed them happy together.

Alba Parietti, the confirmation of the story with Fabio Adami

Although he has always tried to keep his private life a little secret, Alba Parietti can no longer hide his love story with Fabio Adamithe 55-year-old Roman manager who works for the Poste Italiane company and who stole his heart.

The guest showgirl of Italian stories on Rai 1, she spoke for the first time about her new partner: pursued by the questions of Eleonora Daniele and Simona Izzo present in the studio, Parietti had to admit that she found a smile again next to a special man.

“If you ask me if there is a beautiful thing in my life I tell you, taking a risk, yes“, Said Alba Parietti, confirming the rumors that they wanted her to be engaged in a new relationship. The showgirl, however, immediately curbed all enthusiasm, extinguishing every question and curiosity related to her new loving liason in the bud. “If you ask me to talk about it I prefer not, I have preferred for many years that my private one, especially if it is important, remain private. My partner has a job and has a private personal situation related to children and personal matters that it must be faced with great delicacy. It is right that you can know my business, but from there to give interviews and details does not seem right to me ”.

Alba Parietti in love again, the photos with Fabio

Until today Alba Parietti had not let herself go to any declaration about her private life. Always jealous of her privacy, the showgirl has always tried to maintain a certain reserve about hers sentimental events. In recent weeks, however, she has been spotted more than once in the company of a tall, dark and charming man, away from the world of television and gossip.

This is Fabio Adami, a Roman manager whom Alba would have met during an evening with friends. And on that occasion the love at first sight would have occurred. The two were paparazzi in attitudes that left little room for doubts, including tender hugs, complicit glances and sweet effusions in the sunlight.

For a long time, Parietti had professed herself single: her last important story dates back to 2010, when she tied up with Cristiano De André, a relationship that ended after four years of love. For many years no man managed to break through his heart, but it seems that the Roman entrepreneur has managed to overcome all his resistances: this time it seems that things have gone differently than in recent years and that the relationship has been going on for some time. In fact, it seems that with Adami things are going so well that they have also made official presentations with Francesco Oppinithe son of the showgirl.