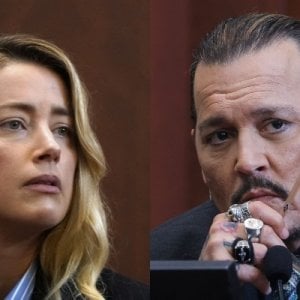 Bankruptcy. Amber Heard she allegedly declared she was unable to pay $ 10 million in damages to her ex-husband Johnny Deppas established exactly two months ago from the court of Fairfax, in Virginiawhich considered the actress guilty of defamation against the actor of Pirates of the Caribbean. More the actress has to pay a very high fee, multi-million dollar talk to his legal team. In short, a disastrous situation that prompted her to put her house in Yucca Valley, California up for sale.

The actress allegedly declared bankruptcy on July 20 (conditionality is mandatory since, for now, there is no official confirmation) and she filed an appeal with the Commonwealth of Virginia on July 21. A complicated situation, to say the least, to which Amber is trying to cope with a series of appeals.

Immediately after the verdict, Heard’s lawyers made it clear: “Amber Heard is unable to pay“. And they had announced that they would appeal for a series of anomalies found during the trial. Which happened regularly, but the judge Penney Azcarate rejected all requests. At that point, Heard relaunched by filing a new appeal based on the First Amendment on freedom of expression. But Depp has also decided to go on the counterattack.

“The verdict speaks for itself and Mr. Depp believes this is the time for both sides to move on with their lives and get back on their feet – the actor’s legal team replied – But if Ms. Heard is determined to continue all this by appealing to the First Amendment, Mr. Depp will file a simultaneous appeal to ensure that the Court of Appeals considers the entire case and all pertinent legal issues. ” And the former “Pirate” filed a counter-suit asking to cancel the two million dollar sentence that the star would have to pay to his ex-wife, for the words spoken by one of his lawyers, Adam Waldmanwho called the woman’s allegations “a scam”.

The renunciation of money in exchange for an appeal

A few days after the court victory, Ben Chewone of the lawyers on the legal team who assisted the plaintiff during the six weeks of the trial speculated that Depp could give up the money that his ex-wife was ordered to pay: “We must be careful in what we say – said the lawyer – but from the beginning what was at stake was his reputation. It was never a question of money, “he told her Abc assuming a possible out-of-court settlement if the star of Aquaman had given up challenging him again on appeal and reopening the case. But this did not happen.

An astronomical amount of legal fees

According to some sources, the legal costs incurred by Johnny Depp’s ex immediately after the sentence amounted to a figure of about 3 million dollars, but there are those who even go so far as to talk about double and beyond. And that’s not all: his assurance of him would have appealed to a clause of the contract and would be refusing to contribute to the costs, and for this he opened a legal dispute with Heard.

Johnny Depp at Umbria Jazz, the star lights up the stage

by our correspondent Giovanni Gagliardi

At this point Amber Heard, who according to the New York Post he would have an estimated assets of between $ 1.5 and $ 2.5 million, he decided to put his home in Yucca Valley up for sale, in California. Purchased by the actress only three years ago for the sum of 570 thousand dollars, today the property can be purchased (assuming you find a buyer, for over a million dollars, thus guaranteeing her a considerable profit).

Located in the desert of Mojave, the house is located on a plot of almost 2.5 hectares. Consisting of three bedrooms and three bathrooms, it is considered the ideal place from which to admire the desert landscape. For any interested parties: the modern kitchen is made up of state-of-the-art appliances. The property has a surround sound system and a garage where up to three cars can be stored, as well as two walk-in wardrobes and bathrooms with sophisticated water temperature control systems.

Amber Heard declares bankruptcy and sells house: she doesn’t have the money to pay Johnny Depp (and the lawyers)