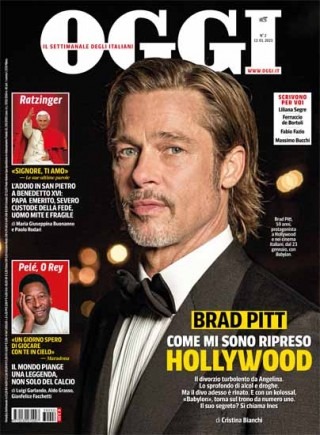 The turbulent divorce from Angelina Jolie. The sinking of alcohol and drugs. The allegations of violence (from which he emerged unscathed). But the star is now reborn. And with the blockbuster “Babylon” he returns to number one. And they say it’s thanks to the young De Ramon. As told by the weekly Oggi on newsstands

Brad Pitt has been a world star for over thirty years. Then alcohol, drugs and divorce from Angelina Jolie seemed to have knocked him out. Instead, here he is reborn. And with Babylon, he enters the myth (and silent film) of Hollywood as a protagonist. Also thanks, they say, to the very young new partner, Ines de Ramon. That she’s practically half her age. As told by the weekly Oggi on newsstands – photo | video

Brad Pitt and Ines de Ramon: the new flirt is the ex-wife of the vampire Paul Wesley – look

The cover of Today on newsstands

HIS ALETR EEGO – «Do you know what I found written on all the doors the first time I arrived in Los Angeles? Dogs and actors are forbidden. With me, things have changed.” Word of Brad Pitt. Or rather, of Jack Conrad, the fascinating silent film actor, protagonist of the musical Babylon by director Damien Chazelle (the one of the six Oscar winners for La La Land), in Italian cinemas from 19 January. A blockbuster of three hours and nine minutes, in which the actor and producer among the most powerful in American cinema is ironic, disillusioned, and in many scenes he makes fun of himself. His alter ego Jack travels decades of history of the Studios, convinced to the last that «Hollywood is me».

Jennifer Aniston: “I did everything to become a mother, but…”. Here’s the reaction of ex-husband Justin Theroux and Brad Pitt – look

HIS FORTUNES – Brad himself, who has gone through mixed fortunes, especially after the separation from Angelina Jolie in 2016 shipwrecked between alcohol and depression, after the rehab and the successes of his production company Plan B, has risen today. His fortune is estimated at around $300 million, according to Celebrity Net Worth. On the other hand, for his appearance at 27 in the feminist road movie Thelma and Louise, when he unsheathed a hair dryer gun from his pants in front of Geena Davis, he earned 6 thousand dollars; for the next Formula 1 film that he is shooting for Apple, the salary would be around 30 million.

THE NEW LOVE – Now Brad Pitt has been sober for six years, that is since, drunk, he would have attacked his then wife Angelina Jolie and two of the six children (but he denies). He admitted to having alcohol and drug problems, faced them and resolved them. Having just turned 59 (December 18), he also has a new girlfriend, Ines de Ramon, who has just turned 30, sales director of a well-known brand of jewelery for VIPs, whom he attends with a dropper so as not to fall back into the trap of golden couple in Hollywood (he had already fallen for it with Gwyneth Paltrow and Jennifer Aniston). And it doesn’t matter if she’s not an actress. She was married to an actor (Paul Wesley) and she has been in that world for years. Brad Pitt keeps his foot on the brake, but has taken the shortcut to his second life. As told by the weekly Oggi on newsstands.