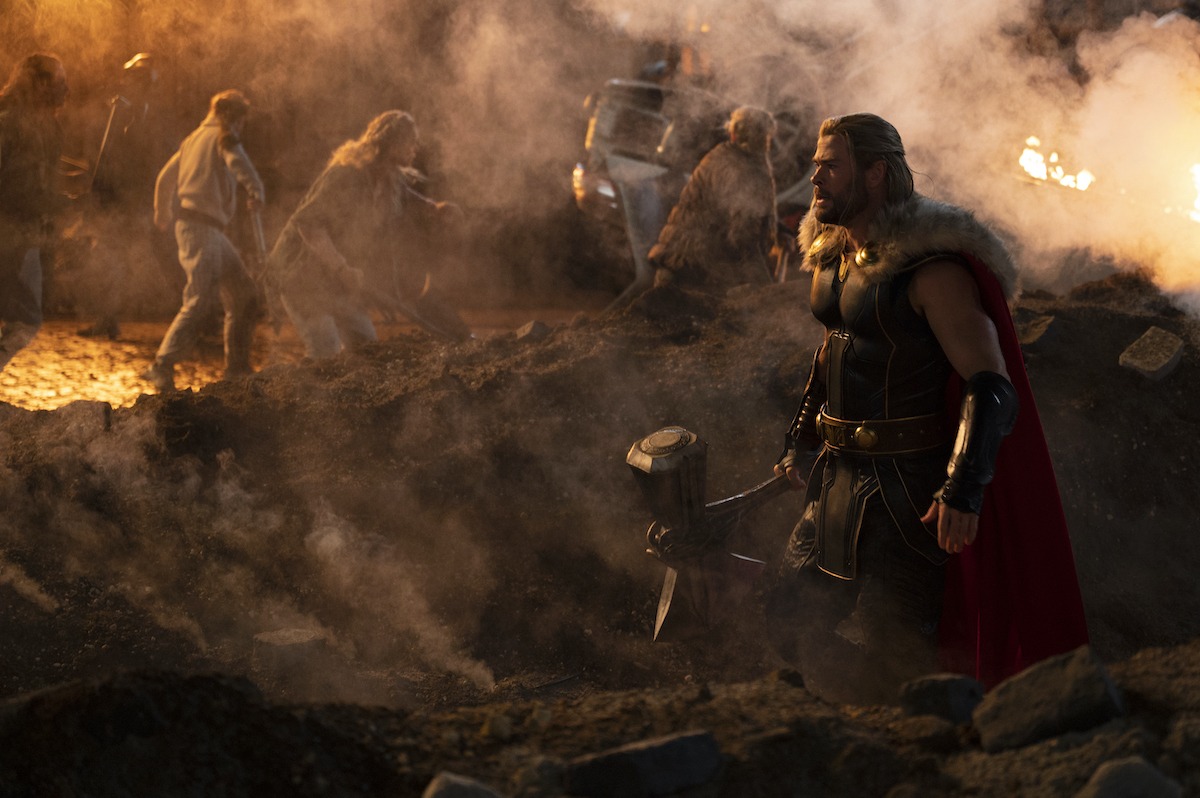 «When I created Thor comics, I asked myself: who is stronger than a man or a superhero? A God! I opted for a Norse god, because he is less familiar than Greek and Roman mythology … “(Stan Lee)

Roaring, excessive, very colorful (but also with a black and white part). And at full volume. Stan Lee’s god with hammer relives in a new eccentric and hyperhuman reinterpretation. Thor: Love and Thunderin cinemas from 6 July, is the second reinvention à la Taika Waititi of Thor and the Marvel cinematic universe. The comic side of the hero has already been brought into focus by the New Zealand director in the previous one Thor: Ragnarok (2017) and, again, in the saga of Avengers of the Russo brothers. This time, the humor and the side weirdo they are literally pushed to the extreme.

Where do we start this time? Miserable Gorr (Christian Bale) and his six-year-old daughter find themselves in a world now devoid of any kind of livelihood. They wander in the desert, without water or food. Gorr prays to his god for him, whose symbols he bears all over his body. However, the child will die. Gorr, challenged by his own god, manages to kill him and will become the “Slaughterer of gods”, eradicating all symbols of faith from his skin. His atrocious revenge will be to seek every single god to exterminate him and those who worship him … Thor (Chris Hemsworth), the god with hammer Stormbreaker, therefore returns from retirement retirement to protect “his” Asgard from Gorr’s violence. Here he will also meet his beloved Jane Foster (Natalie Portman), who in the meantime, thanks to the old hammer Mjöllnir that seemed destroyed forever, has become Mighty Thor. Together Thor and Mighty Thor, with the help of Valkyrie (Tessa Thompson), will try to defeat the “Slaughterer” in the indifference of Zeus (Russell Crowe, who in the original language speaks English with a Greek accent)… Will they succeed?

Camp and kitsch, comic and melodramatic. This is Thor: Love and Thunder. A film full of demented humor, sometimes childish (the name of Jane Foster crippled in Jane Fonda and Jodie Foster), strong quotations and, finally, a villain (Bale) who seems an impossible cross between Marilyn Manson, Lord Voldemort and Joker. Chris Hemsworth returns for the eighth time (chapters Avengers included) to wear the clothes, the hammer in hand (this time two) and the rocky muscles of the hero Thor, created in 1962 by Stan Lee with Jack Kirby and Larry Lieber.

The first two chapters of the films stand alone they were more serious and, at least in intention, Shakespearean. The “Waititi version” of the hammerhead god – Ragnarok and now, Love and Thunder – is much more laughing. The director has the advantage of having a great sense of rhythm. In a matter of seconds he can go from an emphatic joke (“These hands were once used for battle, now they are humble instruments of peace”) to a comic twist (the hero is also awkward and still in love with Jane, like a high school student). There is even a tribute to Méliès (Le voyage dans la lune), in the black and white part on the moon (perhaps the only one a bit too long).

Waititi blends Flash Gordon, 300, Harry Potter and even martial arts. He understands the cine-comic as a crazy and hyperchromatic carousel, in which the MCU and the (almost) puppet theater, the “sandalone” genre and its Eighties reinvention, or “broadswords and witchcraft” can coexist (Conan the barbarian, Yado et similia). It seems to tell us that cinema can be a lysergic game, an illusion of an instant. It plays with Eighties iconography right from the poster and from the rock “logo” of Love and Thunder.

A scene from ‘Thor: Love and Thunder’. Photo: Marvel Studios

The film often comes out of the schemes of the classic cine-comic, has an incorrect cartoon soul and at times, for iconography and “feeling”, it seems to have come out of an animated version of the cult comic magazine – the Seventies and Eighties – Heavy Metal (the US version of French Métal Hurlant). The Nordic myths in Asgord are revisited in a shabby and improvised theater. Here Thor is played by Chris’s older brother Luke Hemsworth, Loki by Matt Damon, while dad Odin has the face of Sam Neill. The hero Thor for Waititi is very strong but also clumsy, human (as well as superhuman), infantile or boyish. A pure. The author invites the viewer to recognize himself in that purity that seems lost.

Chris Hemsworth is right when he says the new Thor apparently shot by Waititi under the pressing advice of the most avid, enthusiastic and brilliant fan. There is something beautifully nerdy and at the same time imaginative, absurd and extremely anti-heroic (at least compared to the classically intended hero). Love and Thunder it is a rather free, quirky film and imbued with weird humor. Get ready for the carousel and, as usual, don’t come off on the credits.

Camp, metal, comedian, mélo: ‘Thor: Love and Thunder’ is proof that even a Marvel film can be ‘free’ | Rolling Stone Italy