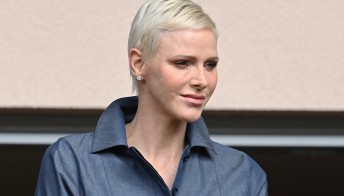 Charlene resumed his institutional commitments after more than a year of absence from the Principality of Monaco, but the expressions on his face no longer manage to hide his discomfort in returning to “normal” court life, which after months of being away, seems to be more suffocating than ever.

The Royal Family of Monaco appeared reunited at the Saint Devote rugby tournament, but it is clear that the Princess has raised a wall with Albert. The couple appears increasingly distant and Charlene’s blank and absent looks only confirm her indiscretions that they would like them to be separated by now.

Charlene of Monaco officially returned to its institutional commitments: it did so last April 30, when attended the E-prixthe Formula E world championship, together with his family, for the first time after more than a year of absence from public appearances.

And she returned to the side of the Prince Albert and his twins Jacques and Gabriella also on the occasion of the rugby tournament of Saint Devote, which had not been held for two years due to the pandemic. The sunny day and the joy of her little ones failed to change the mood of the Princesswhich appeared increasingly uncomfortable to the eyes of the subjects and to the flashes of the photographers.

Impossible do not notice his forced smiles, the absent gazes and strategic sunglasses, ready to hide the sad expression in his eyes. The only demonstrations of affection, as always, were addressed to Jacques and Gabriella: Charlene has never denied a hug, a kiss or a caress to her children, even in public, demonstrating on more than one occasion to be a present and caring mom.

Charlene of Monaco and Alberto further and further away

If on the one hand the Princess has never skimped on gestures of affection for her children, the same certainly cannot be said of the relationship with her husband Alberto. Charlene of Monaco, also on this occasion, never looked at the Prince, and they never even touched.

Between the two there seems to be an impassable wall: their coldness, now evident even in public, would confirm the now increasingly insistent rumors about their separation. Always at a safe distance in institutional events and increasingly distant even in private, husband and wife would have by now a deal worth 12 million a year to avoid divorce and keep up appearances.

Divorce – at least for the moment – would not be contemplated, but to prove that the love of the royal couple is now at an end he was also the expert Michael Begasse. Their presence together only confirms the detachment and the coldness between the two: According to him, during their last public appearance together Alberto “seemed out of context while his wife seemed to have been forced to show up at the event ”.

Body language expert Judi James, who was consulted by the Daily Mail, insists on the “thoughtful expression” and “isolation” of the Charlene of Monaco. “The Princess seems distant from her family, despite the fact that she cuddles her daughter Gabriella.”

Charlene of Monaco, dark glasses and absent gazes: it’s over with Alberto