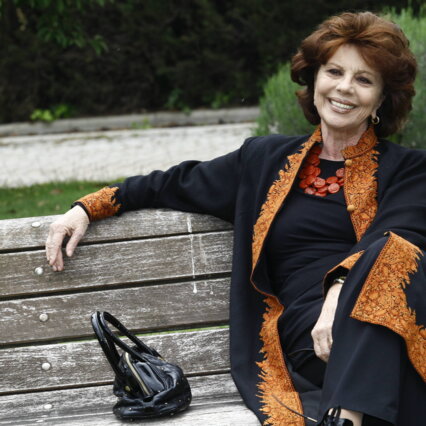 After two editions conditioned by the pandemic, this year the delivery of the statuettes had an even more special flavor with the return all together in the hall. To celebrate it

and the youth of

. To the 64-year-old Neapolitan actor the David for “Ariaferma”, to the 17-year-old Calabrian actress that for “A Chiara”. “I dedicate this award to my wife,” says Orlando. “She’s fine, she’s not dead, she’s alive,” he adds making a joke. “She is definitely the best person I have ever known in my life,” he says of her wife, Maria Laura. “I received my first candidacy in ’91. I was alone, I didn’t know anyone. Today I know at least half the room”. Swamy Ruotolo adds: “I want to thank my family, my sisters who enriched this film and Jonas Carpignano who introduced me to this world and made me love it”.

Sorrentino at his sixth David

by Donatello for “It was the hand of God”. A dedication “to all Neapolitans” and to

, one of his collaborators who disappeared a few days ago. A very excited

won the Davide di Donatello for

for the film “Qui I laugh”. She almost can’t speak for her first David. “Mario Martone told me that it all started with the original manuscript of” Qui rido io “written by Eduardo Scarpetta that my father Mario gave him 25 years ago. The award is also dedicated to my father, who I lost when I was 11 and a half years old. “.

won the David for Best Supporting Actress for “It Was the Hand of God”. “Thanks Paolo for giving me this important opportunity and for you so intimate. My thought on the set was to excite you and instead we managed to excite many people” she said in her thank you speech.

. After more than 30 years of career – a rosy career – he thanks everyone. “Said the little worm with walnut, give me the time I put my hole in” he says in Neapolitan, remembering that sooner then this prize would come. “You do beautiful things even when you have good directors and good actors. So it is a thank you that I offer to this whole room”, says Sabrina Ferilli. Also awarded for 70 years of career

. Many exceptional “amarcord”, recalling the first years of his ten-year career. We will see her in Jasmine Trinca’s film, with which Ralli will go to the Cannes Film Festival. Special David to the director

dedicated to the seventh art. Drusilla Foer reads the monologue made famous by

in The Great Dictator.

. Then the homage to all the sacred monsters of the show that unfortunately we have lost, from Franco Battiato to Gianni Cavina, from Vitaliano Trevisan to Catherine Spaak. On the notes of “Senza fine” by Gino Paoli, sung by Drusilla Foer.

the one for the best costumes (“Here I laugh”). Best original screenplay Leonardo Di Costanzo, Bruno Oliviero and Valia Santella for “Ariaferma”. Best author of the

, Daria DAntonio (“It was the hand of god”) and Michele D`Attanasio (“Freaks Out”). Best Original Song “The Depth of the Abyss” by

Best editing to Massimo Quaglia and Annalista Schillaci for “

“which also wins the prize for best documentary by Giuseppe Tornatore and that for best sound; best non-original screenplay for Arminuta by Monica Zapelli and Donatella Di Pietrantonio. Best composer

for “I Fratelli De Filippo”. Best visual effects “Freaks Out” which also brings home the scenography of Massimiliano Sturiale and Ilaria Fallacara. Best International Film is “

Me against You The Film – The Mystery of the Enchanted School

“directed by Gianluca Leuzzi from a story by Luigi Calagna and Sofia Scalia, was awarded the David dello Spettatore.

David di Donatello, triumph for Sorrentino and Mainetti: “It was the hand of god” best film