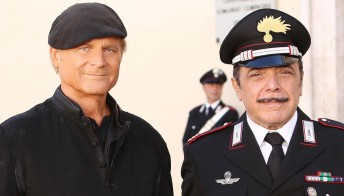 Don Matteo 13 was suspended, even if in the last episode aired Thursday 5 May on Rai 1 Don Massimo, alias Raoul Bovahas finally made its way into everyone’s hearts.

Don Matteo 13 suspended when he comes back

To tell the truth, we won’t have to wait long to see what will happen to Don Massimo and Captain Cecchini (Nino Frassica) and above all to know if the Capitana (Anna Maria Giannetta) and Nardi (Maurizio Lastrico) will be destined to get back together. Indeed, Don Matteo 13 jump but only for a week, to give space to the Eurovision Contest which will be held in Turin and sees Blanco and Mahmood competing with their Chills. There is great anticipation to see if the pair can match the Maneskin’s last year’s success.

But let’s get to Don Matteo 13. The programming will resume the following week with a double appointment, Tuesday 17 and Thursday 19 May, again on Rai 1 in prime time.

Meanwhile, the episode just broadcast, The innocenttriumphs as usual in the ratings, gluing 6.2 million viewers to the TV, equal to 30% share. And the series is confirmed once again the most watched show of the evening. The success is so great that even The Island of the Famous he decided to change his day so as not to be competing with a sacred monster which is Don Matteo. And the passing of the baton from Terence Hill to Raoul Bova it seems to have created no serious jolts. The public is growing fond of Don Massimo, overcoming the last suspicions towards him.

After all, even Cecchini is getting used to him and has broken the ice by inviting him to play chess, even if he prefers Briscola. On the other hand, he did not spare him jokes such as: “Who do you think you are, Don Matteo?”. Or when the Captain took the liberty of giving him a complement: “The priest was right”, the Marshal’s reply is cutting: “It’s not Don Matteo“.

But then when even Don Massimo loses confidence in himself, enlightenment arrives and even Natalina he understands him and becomes attached to him. Also thanks to an interview that the priest has with his bishop, played by none other than Giancarlo Magalliwho tells him about a petition against him but also invites him to continue in his office.

Even the public applauds and compliments flock to Twitter: “Full church and I cry for don maximum Yup, I’m starting to genuinely love him“. “Don Massimo it is not Don Matteo and we all know it but me Raoul Bova is liking it a lot in this role. He got into the role well and I love the way they are characterizing his story. ” “I begin to genuinely love a Don Massimo “. “Don Massimo for me a big yes. Raoul Bova is not disappointing, they have chosen the right person to replace Don Matteo in the best possible way without ruining the series “.

Raoul Bova he literally conquered everyone and the affection of the characters towards Don Massimo is the same that the viewers are feeling for him. But the plot of the episode is much more intricate. In fact, at the same time the amorous plots and misunderstandings that the usual Cecchini contributes to create are not wasted. In fact, just when Federico he begins to hope that something may be born between him and Greta, the girl seems to approach another partner. Cecchini, on the other hand, understands that Valentina she is dating a man much older than her and decides to find out who he is: she does not know, however, that it is Nardi. Both he and Valentina will do everything to keep Cecchini from discovering the truth, and even Anna, despite her, will find herself lying to keep up with him.

Don Matteo 13 suspended. Even if Don Massimo conquers everyone