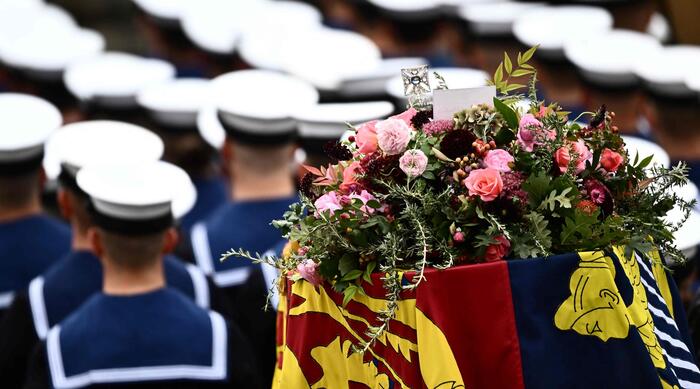 Touching and symbolically significant moment before the burial of Elizabeth II. The royal insignia – the crown, the scepter and the golden globe – were removed from his coffin and handed over in St George’s chapel to the celebrant who placed them on the altar.: as if to testify that Elizabeth descends into the tomb without frills, no longer queen in front of that God in whom she believed. A faith that the Reverend David Conner once again recalled during the rite as “simple and solid”, pointing to it as the basis of the example of “courage and hope”, as well as of service “to the country, the Commonwealth and the wider world. vast of our sister Elisabetta “. The ceremony then began to conclude when King Charles, eldest son and successor to the throne, approached alone – with all the bystanders standing – to lay the banner on the coffin that traditionally serves to identify the commander in chief in battle; while following the Lord Chamberlain of the royal house broke the command wand, to seal the end of the earthly power of a deceased sovereign. Both the banner and the broken staff will be buried with Elizabeth.

They attended the last greeting of the sovereign 800 selected guests, outside – with soldiers and collaborators of the royal house – the pony Emma and some Welsh Corgie dogs dear to Her Majesty. The final liturgical ceremonial follows Elizabeth’s wishes in detail: also the singing of a hymn of the Orthodox tradition, Russian Kontakion of the Departed, chosen by her beloved wife Philip for her funeral in 2021.

To welcome Elizabeth to Windsor the military departments and the royal staff, there is also the pony Emma, ​​deployed by a manager of the court stables. Emma is one of the last animals that the sovereign, very passionate about horses even over 90 years of age, was portrayed riding, not many months ago. Inside the chapel of St George, the guests invited to the suffrage ceremony scheduled before the entombment are already seated.

Previously after the solemn funeral the Queen’s coffin had been accompanied on foot through London and reached Wellington Arch, a monument in honor of the Iron Duke who defeated Napoleon, where the coffin of the deceased sovereign was transferred to a hearse for the final journey: the one that will take her mortal remains out of London, until his burial in St George’s Chapel at Windsor Castle. The procession stopped at the sound of the whistles of the escort departments of the Royal Navy, followed on foot once again by the 4 children of the matriarch (King Charles and the princes Anna, Andrea and Edoardo) and the two children of Charles, the heir to the throne William and second son Harry. While further back, the royal cars with their wives on board stopped: in the first of which were seated Queen Camilla, the Princess of Wales, Kate, and the second child of William and Kate, Charlotte. Now the journey continues for all members of the Royal Family by car.

Queen Elizabeth II’s coffin was carried on the shoulders by a Royal Guard picket of honor inside Westminster Abbey. Thus began the solemn state funeral of the sovereign who reigned for 70 years, more than anyone else, on the throne of the United Kingdom and who died on 8 September at 96 years of age.

Funeral of Queen Elizabeth, the royals arrive at Westminster Abbey


The coffin was also followed along the central nave inside the abbey by the princes George and Charlotte, great-grandchildren of the sovereign, who joined with Queen Camilla and the other consorts in the procession – behind King Charles, his brothers and sons – only inside the church. Reverend David Hoyle opened the liturgy after the singing of a first solemn hymn, recalling with his voice initially cracked with emotion the symbolic value of Westminster Abbey in the long life of Elizabeth II: who was united here in marriage with the prince. Filippo still as hereditary princess in 1947 (inaugurating what would have been a union that lasted 73 years); and still here she was solemnly crowned queen in June 1953, just over a year after she took the 26-year-old British throne upon the death of her father, King George VI: the sovereign linked with Winston Churchill to victory in World War II

Among the flowers placed on the Queen’s coffin, a note was noticed with the inscription ‘In loving and devout memory’ (ANSA)

Elizabeth II “has dedicated her life to serving the nation and the Commonwealth,” as she promised on her 21st birthday radio show. This was stated by the Archbishop of Canterbury, Justin Welby, primate of the Church of England, in his sermon during the solemn liturgy at Westminster Abbey in memory of the late queen. Welby also recalled the ‘We’ll Meet Again’ that the sovereign sent in a message to her subjects in the midst of the lockdown for the Covid pandemic, reiterating it now in the name of faith in the afterlife. Prior to her sermon, British Prime Minister Liz Truss had read a passage from the Gospel of John about the promise made by Jesus Christ to his disciples of a place in heaven.

Deep emotion at the funeral even among the benches of the Royal Family: while reading a passage from the writing entrusted to Baroness Patricia Scotland, British high diplomat and Commonwealth secretary general, we saw Prince Edward, fourth child of the sovereign, blatantly wipe a few tears from his eyes with a white handkerchief. Edoardo sits in the very first row, beside the bier on which his mother’s coffin rests, next to King Charles with his wife Camilla; to Princess Anna, second royal child with her husband Tim Laurence; and his wife Sophie ..

Reverend David Hoyle’s blessing of the assembly closed the solemn religious rite of Queen Elizabeth’s state funeral in Westminster Abbey. A blast of trumpets followed, then two minutes of silence in memory of the sovereign observed in the church, in London and throughout the Kingdom and the singing of the British national anthem: in the revised and corrected version of God Save the King, in honor of the new King Charles III. The sound of a bagpipe, followed by the notes of the organ of the historic abbey, then accompanied the exit in the procession of the celebrants and concelebrants: including the Anglican archbishop of Canterbury, Justin Welby, who had recited before the liturgical epilogue a prayer in suffrage of the soul “of our sister Elizabeth”, ecalling out his “sure hope in the resurrection”, and the Catholic Archbishop of Westminster, Cardinal Vincent Nichols. The coffin was then picked up on the shoulder by a Royal Guard picket of honor followed along the aisle at a cadenced and solemn step by Charles II and the other royals arranged according to the ceremonial order. A further coffin procession is now planned in the heart of London to Wellington Arch. This will be followed by a transfer by car to Windsor Castle, outside the British capital, burial site.

The funeral procession started from Westminster Hall and traveled a few tens of meters to accompany the coffin of the sovereign lying on a Victorian-era cannon carriage at Westminster Abbey where the solemn liturgy is held with the leaders and dignitaries arriving from all over the world. King Charles and the other Windsors, Anna, Edoardo and Andrea, followed by William and Harry, after leaving Buckingham Palace in their car, are leaving on foot at the tolling of the bells from Westminster Hall to follow the coffin. The princes George and Charlotte, unlike what was anticipated by the media, are already in church with the queen and the princesses consorts.

The solemn state funeral of Queen Elizabeth it could become the most watched TV show of all time, with 4.1 billion viewers. These are estimates all to be confirmed circulated in these days on the British tabloids and relaunched today by the Daily Mail.

Farewell to the Queen, Elizabeth buried in Windsor with Philip. The tears of subjects and royalty – Europe