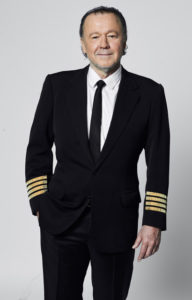 “Can we call you Commander?” Enrique Piñeyro for 11 years he has ‘flown’ airliners. In jargon, we don’t say ‘fly’ but ‘fly a plane’, she reveals. He is also a doctor, actor, producer and director. And also a philanthropist: “I bought and donated a ship and two planes to the NGO Open Arms,” he says. From his experience as a pilot and director was born “Flying is human, landing is divine“. A multimedia theatrical show that after its success in Argentina and Spain arrives at the Teatro Lirico in Milan for only one date: tonight 12 November.

On stage there is a real cockpit. And a flight simulation with a cinematic effect. Then the show continues between projections and humorous monologue. The target? Reassure and at the same time entertain those who are afraid of flying. “The first objective, however – warns the commander – is not guaranteed. The second, on the other hand, yes “. Piñeyro with his pungent humor contrasts the risks of everyday life on earth with those of flight.

Your show opens with the simulation of an accident: does this seem like the way to pass the fear of the plane?
Starting from my experience in the cabin of a Boeing 737-200, a plane that I have flown many times, I make the public understand that the safety standards of flights are far superior to that of our life on earth. In the aeronautics everything is under control: the history of an airplane can be traced by tons of documents (now digital), including those of preventive maintenance. Absurdly (smiles, ed) it is easier to crash on your way to the airport by car than on board a plane.

What other terrestrial dangers do you refer to in your show?
I like to bring numbers. In 2017, 4 billion people were transported in 38 million flights and no one died. But in the same year, 256 people died from hunting Pokemon. In 2013, 1 million and 350 thousand people died in road accidents, 25 thousand were eaten by dogs, 810 thousand lost their lives due to mosquitoes, 710 thousand due to domestic accidents. Do you know how many people die from plane crashes a year? On average 348 people. While from 5 to 15 for attack by sharks. But the cinematography is wallowing in it: killer sharks and falling planes are a classic.

His show is also very humorous: like in the movie The craziest plane in the world?
The show is a comedy. If I have to be honest, that is a film that I really like. It uses a precise technical language that only we pilots recognize. A few examples: when pilots talk about ‘instrumental flying’ (ie without visible earth references) and to make people laugh they start playing musical instruments, only we understand the joke well. Even the roar heard in the film is a precise element put on purpose to make those who understand it laugh: even though it is a jet, the sound is that of a propeller plane.

Commander, what aircraft have you flown?
Boing 737 and Saab 340, at a height of 13,000 and 100 meters with 120 passengers on board. I worked for the Argentine regional line Lapa. I left the company in 1999, two months before the worst Argentine accident ever. I was already in unsustainable relations with the company and I had already denounced the lack of maintenance of the vehicles and adequate training of the pilots. A trial with two convictions ensued. Then the company went bankrupt.

Have you ever had any emergencies to manage? And fear?
Fear no. Voltage yes. I have faced several emergencies. I have had to deal with risky situations. Three engine failures and three pressurizations. But if I’m still here it’s a sign that I’ve solved it (laughs, ed). How? By applying the emergency procedures learned in the simulations from time to time. I’m talking about the company I worked for. I flew planes that I knew were working but evidently there were technical situations that were hidden. Otherwise there would have been no risk.

You are also a doctor: a fortune for your passengers …
I have had a passion for flying since I was three. But I studied medicine and ended up doing a double job. I came out of the hospital and wore the uniform. Then I specialized in aviation medicine. A specific sector that deals with studying the effects on the body of pressure, cosmic radiation, low oxygen concentration. To answer his question, if someone were to ask ‘is there a doctor on board?’, I could reply: ‘the captain arrives immediately, puts on autopilot and arrives ”.

Pilot, doctor and even director …
I made a feature film about the accident that took place in Argentina a few months after my resignation. It is called “Wisky Romeo Zulu”, which is the full abbreviation of the serial number of the plane that suffered the accident. 65 people died. It is a fiction of which I am the protagonist and director. This was also followed by a documentary on the accident.

You bought two jets and a ship to give it to the NGO Open Arms: how rich are you?
Blatantly rich. I bought two luxury planes, paying an obscene price, I admit. And a yacht. Now they are no longer means of luxury. The collaboration with Open Arms was born during the pandemic. But before that my NGO Solidaire was already born. We transport refugees from war posts. Refugees. The planes recently brought more than three thousand Ukrainians to Italy, Spain and Canada.

How did he get so rich?
I practice disruptive capitalism. I have an accumulation of capital that I think shouldn’t be allowed. But in fact it is. While paying all my taxes, I amassed a brazen wealth. I have several companies, all with the same name Anchoita, in different fields, from aviation film production to catering. I learned from my grandfather to invest. That’s all. In capitalism, no one gets rich with work. Some with questionable procedures, others like me learning to invest.

How does it feel to see the earth from above?
It is special, the landscapes that can be seen from above are pure magic. When it rains, with the light of the headlights, the drops arrive horizontally. It feels like being in a Star Wars scene. And then there are the fires of Sant’Elmo, indescribable blue lightning at 900 km per hour. From Seoul to Buenos Ires in 20 hours and 19 minutes you can see two sunsets and a sunrise. If you go to Sidney and then to Tahiti and repeat the New Year. This is my poem. Isn’t that crazy?

“I am brazenly rich. I have an accumulation of capital that should not be allowed”: the commander and doctor Enrique Piñeyro tells himself – Il Fatto Quotidiano