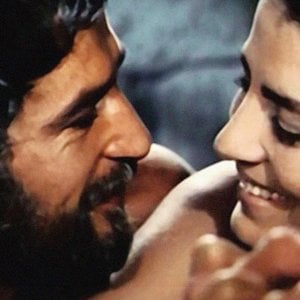 ‘Odyssey’, the blockbuster drama with Irene Papas and Bekim Fehmiu who glued us to the tv

The stage and the camera were inscribed in her destiny, already at the age of 12 her parents (her mother was a teacher and her father taught classical drama) had enrolled her in the school of dramatic art. The first years of her profession saw her on stage as a singer and dancer then on the radio, always as a singer. Trained in Athens in the Greek classics, Irene Papas he played all the main tragic roles in the theater, starting with those of Medea and Electrataking part in the contemporary productions staged by Popular Greek Theater in the late 1950s.

His link with Italy was strong, the land of his exile which began when the military junta of the colonels took power in Greece in 1967. Papas immediately took a public position by asking his compatriots to participate in a “cultural boycott” against that which he called the “Fourth Reich”. During the period in which he lived in Italy, before moving to New York where he remained until 1974, Papas made himself known by the Italian public also for his participation in the role of Penelope toOdyssey, the drama co-produced in 1968 by various countries and based on the poem of the same name by Homerwho saw her next to Bekim Fehmiu in the role of Ulysses. A memorable drama also because, on Rai, each episode was preceded by an introduction in which the poet Giuseppe Ungaretti he read some lines of the poem.

The year before, in 1967, Irene Papas had debuted on Broadway in That Summer, That Fall. Later, he would also provide critically acclaimed and prestigious award-winning theater performances, starting with the adaptations of Euripides directed by Michael Cacoyannishow The Trojans in 1972, in which she played Elena, and Iphigenia in Aulis in which Clytemnestra was. On American television, Irene Papas was Zipporah in the 1976 miniseries Moses the Lawgiver And Rebekah in the epic Jacob of 1994.

His last big screen appearance was in 2003 for the film A Talking Picture by the Portuguese director Manoel De Oliveira. In 2018 it was announced that Irene Papas had been suffering for five years now Alzheimer’s. Since then, the actress has lived away from the stage and she has retired to private life.

Irene Papas died, it was Penelope in the drama ‘Odyssey’