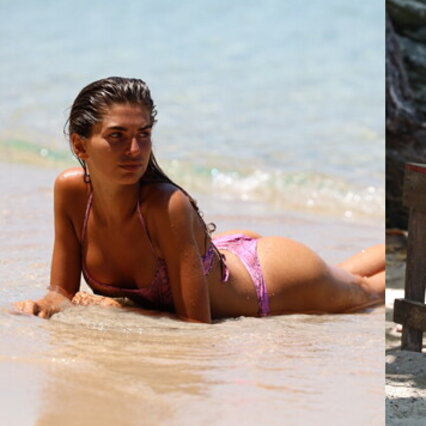 – The dissolution of the tribes sent Alexander into crisis. He chooses to switch from one faction to the other, but immediately ends up under accusation. Alessandro’s position is questioned by Clemente and his former companions and this creates a further rift on Playa Rinovada. His mother Carmen Di Pietro takes the field to defend him. In Playa the attempts at clarification are worthless and Alessandro, offended by the accusations of Clemente and the others, tries in every way to explain his reasons.

– Between Carmen Di Pietro, Estefania Bernal and Blind, Estefania leaves the Palapa for Playa Sgamada. Bernal gives the kiss of Judas to Nicolas Vaporidis and sends him directly into the nomination: “I didn’t like it because it’s fake, he talks behind the scenes and he plays a double game”.

– On the island, as a joke, there are those who question the love and the real intentions of Marco Cucolo and Lory Del Santo. Ilona since she reached Playa Sgamada has repeatedly told Lory that she has noticed a strong understanding and particular looks between her boyfriend and Licia her, putting her on alarm. Even Licia, after having landed on the new island, held up the game for Ilona, ​​reconfirming what was told by the Naufraga. At this point, Lory does not hide her concern and, just to reassure her, the Spirit of the Island decides to give her a wonderful surprise. Marco reaches Playa Sgamada for ten minutes and tries in every way to reassure Lory, holding her in a big hug.

– Nicolas is accused of being a double agent: “He is a strategist, he is the director of the Island” Blind says. According to the rapper, Nicolas is the real puppeteer of Playa Rinovada. In particular, Nicolas is accused by Clemente and Laura of speaking badly of his companions, especially Guendalina, behind him. “I don’t want to think one hundred percent evil of Nicolas” retorts Guendalina, unmasking what she believes is the strategy of their opposing faction and in particular of the Russo spouses: “I am dealing with fake people, I want to make the former Tiburón believe to be their friend. I want to expose the conspiring spouses! “. “These are not opponents, they have become enemies” says Nicolas, explaining that he has always been clear and that he has always told Gwendolyn everything he thought of her by looking into her eyes. Laura, Clemente and Blind (who bursts into tears) state with absolute certainty that Nicolas is actually very different from what he lets believe.

THE RELATIONSHIP BETWEEN CARMEN AND ALESSANDRO

– Carmen rules are naturally unique. At home she wakes up at 5 in the morning and demands that her son do it too and has dinner at 18.30 and then you will wash with the suitcase: “I want my children not to experience the sufferings that I have experienced in the past”. Her son declares that he wants to go and live alone: ​​”I have already paid the deposit”, he tells her. Meanwhile Di Pietro tells of her difficult childhood, when her parents could not even afford to buy her a doll: “Up to 14 I was a farmer, then I graduated and tried my luck in the entertainment world. I received many doors in the face but I never gave up. Wanting is power. ” I am so proud “, comments Alessandro.

ESTEPHANIA FACE TO FACE WITH BEATRIZ

– “I don’t know if Beatriz wants to advertise but I trust Roger”, confesses Estafania. “He didn’t tell you the whole truth, he wrote me a love letter, he brought me a beautiful gift from Italy when I was in Brazil, he told me that I was the most important woman in his life after my mother … he made fun of me “, Beatriz intervenes. “Maybe he has changed his mind, he is always the same with me, he has not changed mine”, replies Estefania. “It’s true that we broke up, but we’re still connected,” continues Roger’s ex-girlfriend. “I trust Roger, she told me everything, I’m not worried about going to another beach, everyone has their own past … I didn’t know that she will remain on the island alone with Roger … but I trust “, concludes Estefania. The two rivals greet each other with a kiss.

A COMPARISON OF ROGER AND BEATRIZ

– “I’ve told you a thousand times to feel free to meet people”, attacks Roger. “You lie,” says Beatriz. You told me I still love you, I want to be with you again “, he continues.” It’s true, but it was a year ago “, he justifies himself.” You also told you that we will not be mine together “, Roger points out.” You must be a man and say that I told the truth, that you made fun of me “, Beatriz is sure.” It doesn’t affect me to see her, she’s always beautiful … I’m not in love, but I like it, I’m not in love either of Estefania “, the model replies to Blasi.” He hurt me, I’m not in love with him “, says Beatriz.” Time will tell us the truth, Beatriz will stay with you for some time “, concludes Blasi.