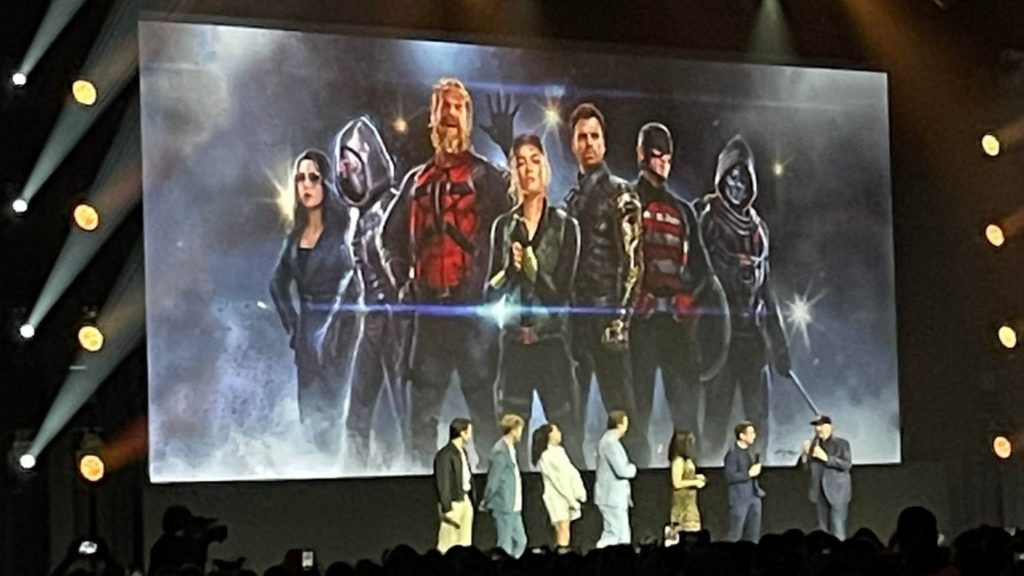 The big day has arrived: the most awaited appointment at D23 Expo in Los Angelesor the panel dedicated to Marvel Cinematic Universe. It’s been a little over a month since San Diego Comic-Con and the announcement of Phases 5 and 6but Kevin Feige and associates had kept several aces up their sleeves pending this convention.

In a room packed with thousands of fans of Captain America, Iron Man and all the other heroes who have hit the world box office in the past 14 years, i Marvel Studios have revealed their cards for the future of the MCU – starting with a fantastic piece from the musical Roger!

The Marvel Studios Panel kicks off at # D23Expo! pic.twitter.com/D3P6FhpL1O

Below, here are the main news updated live, minute by minute from Los Angeles.

From the sequel to Ryan Coogler exclusive content was shown and the release date was remembered: November 11, 2022 in the States. For the cast, present on stage Winston Duke, Tenoch Huerta (for the first time in public as Namor), Letitia Wright And Angela Bassett.

Open applause for the first appearance of Riri Williams and the teaser trailer for Ironheartthe series that will bring the ideal heir of Iron Man to the MCU. On stage Anthony Ramosperformer of The Hood.

Paul Rudd, Evangeline Lily And Jonathan Majors on stage to present the sequel to the film ready to open Phase 5 and project us towards Avengers: The Kang Dynasty. To follow, an exclusive first look at Ant-Man and the Wasp: Quantumania!

The composer was a great guest Michael Giacchinoalso director of this Halloween special on the monstrous Marvel character: Werewolf By Night, who could join Blade, Moon Knight, and other great MCU heroes. On stage also the protagonist of the special: Gael Garcia Bernal. The first trailer is then shown.

Don Cheadle from the stage of D23 he announced a great series, Secret Invasionof which the first official trailer was shown.

After the doubts of the last few weeks, the second series with Don Cheadle is also confirmed! It will be six episodes and filming will begin next year, it was announced. It will be directly linked to Secret Invasion.

Audience in delirium for Tom Hiddleston and the rest of the cast of Loki, of which the second season has been confirmed. Then shared the first look of Loki Season 2.

First teaser trailer for the spin-off of Hawkeye, Echo. After the first images, which confirmed the return of Kingpinhere it is Vincent D’Onofrio and the protagonist Alaqua Cox on stage, along with the rest of the cast of the Marvel show.

On stage still Vincent D’Onofrio, joined by the great star Charlie Cox returning as Daredevil after years in the series Netflix. No trailer, because the series will only be shot starting next year, but a scene from She-Hulk which sees him as the protagonist.

At the end, here is the new one on stage Captain America: Anthony Mackie. After the series The Falcon & The Winter Soldierthe new lead face of the MCU will have his first stand-alone film directed by Julius Onah. An incredible return has also been announced: that of Tim Blake Nelsonappeared in The Incredible Hulk of 2008.

Great announcements for the formation of villains and anti-heroes: Kevin Feige announced that he will also return to the group Bucky Barnes And Sebastian Stan is present on stage together with David Harbur, Julia Louis-Dreyfus, Wyatt Russell And Hannah Dominique E. John-Kamen. In connection with a video message instead Florence Pughintended to lead the group.

Closing with a bang: Brie Larson, Teyonah Parris and Iman Vellani on stage at D23 to show the first trailer of The Marvels – due out in July 2023.

Marvel, from The Marvels to Secret Invasion: all the news and trailers shown at D23 Expo [VIDEO]