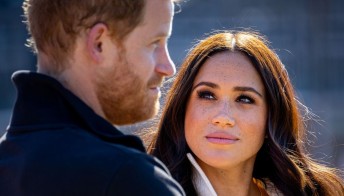 Meghan Markle distances himself from Harry and renounces everything in his court life, including the famous tour in Australia that the Sussexes made immediately after their wedding and which consecrated the couple as the most beloved of the Royal Family. Despite the affection that people have shown them, the former actress has shown all the contempt for her.

Meghan Markle he “hated every second” of the trip to Australia and found the whole tour “useless”. This is what the former editor of Vanity Fair Tina Brown. The writer revealed Meghan’s true feelings in her new bio The Palace Papers. Brown knows the Royal Family very well, she was Lady Diana’s biographer and has several contacts with the Palace. Thus, she uncovered Lady Markle’s real opinion through a former Buckingham Palace staff member and promptly put it down in her book.

When the Sussex arrived in Australia in the fall of 2018 they were welcomed by the population in triumph. The Duchess announced during the flight that she was expecting her first child, Archie. The news of the pregnancy and the attention for the couple, which was skyrocketing, sparked a real Harry and Meghan mania. The Sussexes liked them for their spontaneity and their willingness to connect with people. Everyone adored Harry for his kindness and affectionate gestures towards his wife and everyone admired Meghan’s elegance and sweetness. Nevertheless the feelings were not reciprocated.

Brown states that Meghan actually hated traveling. “He didn’t understand why things were set up that way. Instead of being thrilled when thousands of people welcomed her to the Opera House, she reacted like this: ‘What is the purpose? I don’t understand all of this’ ”.

The biographer increases the dose and claims that Lady Markle did not understand the “representative role” of the British monarchy on the tour and was more interested in how it looked in the spotlight. Brown’s claims are also supported by an article in the Times last year in which we read that Meghan did not understand why so many people flocked to see the Sussexes. She also claims that the only thing Sussex realized from that tour was the little importance that she and Harry had on the Royal Family hierarchy.

Harry’s wife was thrilled by the interest in him and the media exposure. She “she thought she was promoting the Sussex brand”, but instead when she returned to Great Britain she felt snubbed by the Royal Family and from there the problems started. Shortly after their return home, word spread that all was not well inside the Palace and news began about a rift between brothers and a quarrel between Meghan and Kate Middleton.

Meghan Markle denies Harry: “I hated everything in every second”