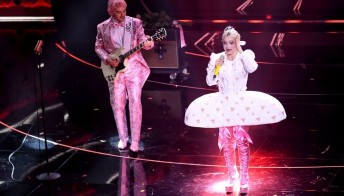 Amadeus will return for the fourth consecutive year at the helm of the Sanremo Festival. Just, live on Tg1during the episode of May 2, the conductor and artistic director has unveiled the dates of the five evenings of the next edition.

A winning horse does not change. For this Rai has decided to reconfirm for the fourth time Amadeus at the command of the Sanremo Festival. In the dual role of conductor and artistic director, the presenter has shown that he can give new life to the historic singing festival, convincing a transversal audience, for musical tastes and ages.

Today, during a connection with the evening Tg1, Amadeus unveiled the dates of the five evenings of the 2023 edition of the event, which will be broadcast next winter. In fact, the 73rd Italian Song Festival will take place from 7 to 11 February 2023as always live on Rai 1, from the Ariston Theater in Sanremo.

How will it go this time? If the premises are those of the last three years, the ratings will reward the flagship network, but a challenge awaits at the Amadeus gate: what will he have to “invent” this year to surpass himself and reconfirm, if not increase, the success of the last edition?

Certainly, the removal of anti-Covid restrictions will facilitate the mission of the conductor, who, if he managed to complete two editions in full pandemic, will certainly not fail this time.

Meanwhile, again today, Amadeus announced the regulation of Sanremo Young and the date of the selections, that is next 12 December, from which the three artists or groups that will compete together with the Big ones will be chosen.

Sanremo 2023, there are already the first controversies

The announcement of the dates of the five evenings of Sanremo Festival 2023 came together with first controversy, for now still subdued. In fact, according to the latest rumors, not everyone likes the dates chosen for the five evenings.

Rai apparently wanted to bring the singing festival back to Januaryas happened until the 70s, while the tour operators of Sanremo have repeatedly asked for a shift towards March. February might seem like a good compromise to get everyone to agree, but we await the eventual evolution of these controversies to find out more.

The possible surprises of Sanremo 2023

If it is still very early for the whole singers (will the Jalisses manage to win a place this year?) We begin to think who could support Amadeus in the 2023 edition of the Sanremo Festival. The first name that is made is obviously that of Fiorello which, however, given last year’s decision not to stay for all the evenings, now seems increasingly distant.

And for women? Some did not like it very much the alternation of five conductors, given that some of them (in particular Ornella Muti) were given very little space unlike others (see Maria Chiara Giannetta). Why not choose then a steady presenter for all evenings, at the same level as Amadeus?

One could think of strong names on state TV, such as Antonella Clerici, Simona Ventura or Milly Carlucci, or focus on younger and unexpected names, from Arisa (already co-host in 2015) to Bianca Guaccero or Caterina Balivo.

Sanremo 2023, Amadeus announces the dates of the 5 evenings