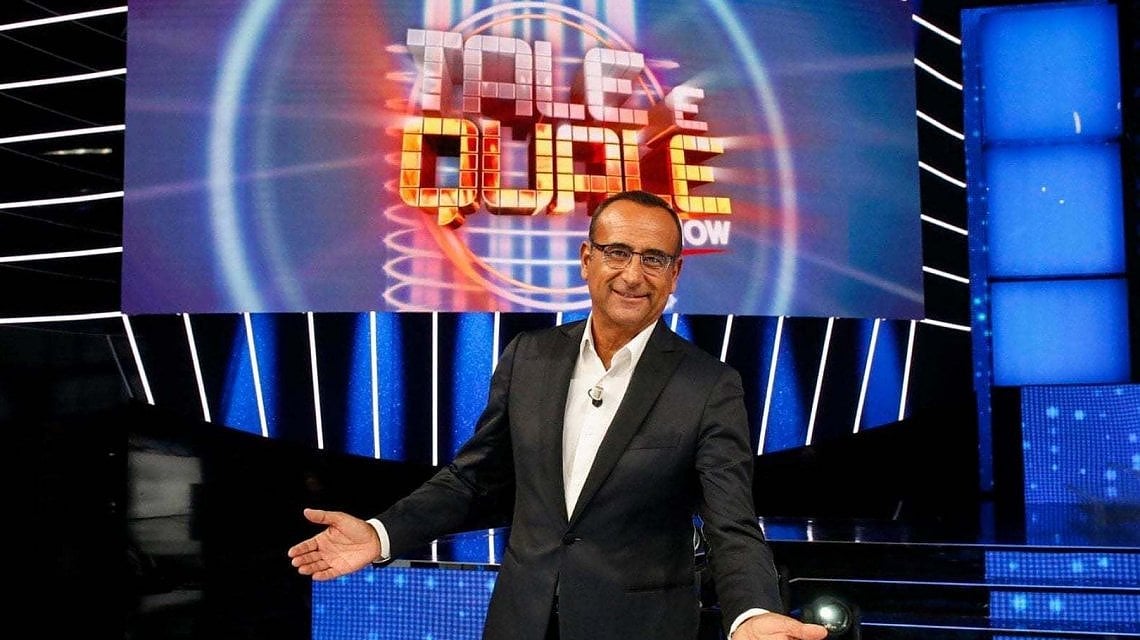 Last episode of Such and Which Show. Among make-up, wigs, feathers and sequins we will finally know the name of the winner of the twelfth edition of variety led by Carlo Conti. Everything is ready in the Fabrizio Frizzi television studios in Rome with the seventh appointment of the flagship variety of Rai1 on air tonight, Friday 11 November, at 21.25.

A fundamental episode, which will proclaim the Champion of Tale and Which Show 12. But it will also be an important evening for the rest of the standings. Yes, because the best protagonists of this twelfth edition will have to face the best of the eleventh, in the tournament of champions that will be broadcast on Friday 18 November: in that case there will be the title of Champion of Tale and Which Show 2022. He will succeed Antonino to keep the first position and therefore to triumph? Nothing is decided yet: the points of distance between the competitors in the ranking are really minimal and everything is still in play.

For the protagonists it will be essential to give proof of great transformation once again with the aim of convincing the jury composed of Loretta Goggi, Giorgio Panariello, Christian Malgioglio and the fourth surprise judge. But you will also have to convince your fellow adventurers, since each artist will have the opportunity to enrich the ranking by giving their preference to the colleague they want to reward (without forgetting the possibility of self-voting). A week ago the episode sample was Andrea Dianetti.

In this last episode the competitors will perform in other unpredictable transframations: Elena Ballerini Sara Christina Aguilera, Rosalinda Cannavò will put himself in the shoes of Katy Perry, Samira Lui will pay homage to the myth of disco music Donna Summer, Valeria Marini will try to identify with the actress Nicole Kidman, Alessandra Mussolini will test with Fiorella Mannoia, Valentina Persia the gloomy English singer will remember Amy Winehouse, Andrea Dianetti will try the encore with Gianna Nannini, Claudio Lauretta will pay tribute to Claudio Villa, Gilles Rocca will have the appearance of Fabrizio Moro, Antonino will defend the primacy with Riccardo Cocciantewhile Francesco Paolantoni And Gabriele Cirilli they will be Loretta And Daniela Goggi.

Even the audience at home, leader of Friday night prime time with very high ratings, will have a say, because viewers can express their preferences via Facebook and Twitter: the three most voted performances from home will bring to the three performers respectively 5, 3 and 1 point. At the end of each bet, the highest overall score decrees the winner of the bet; the general classification, given by the sum of the votes of each episode, will instead lead to the election of the final winner, who will then be proclaimed Champion of Tale and Which Show 12.

All eleven interpretations will be accompanied live by the orchestra conducted by the maestro Pinuccio Pirazzoli. Behind the scenes plays a fundamental role for variety: a team of professionals, made up of costume designers, make-up artists, hairdressers, and choreographers, follows the evolutions of the artists throughout the week, together with vocal coaches. Maria Grazia Fontana, Dada Loi, Matteo Becucci, Antonio Mezzancella and to the actor coach Emanuela Aureli. Fixed appointment also with the “web imitators”, also present in this episode thanks to the amateur videos. And they will soon be protagonists “in flesh and blood” of Such and what.

‘Such and what show’, the last episode: Antonino must defend the top of the standings


Find here our social media profiles , as well as other pages that are related to them.https://prress.com/related-pages/