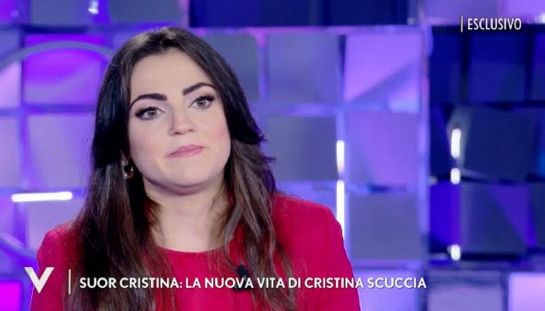 Seven days ago he amazed Italy by telling a very true to have undressed the dress and to be no more Sister Christinabut simply Cristina Scuccia. Today the winner of The Voice of Italy 2014 is back in the living room of Silvia Toffaninto add a second chapter to his transformation story. The topics dealt with were many and intense: from love to the life that awaits her, to the hope – for now only cherished – of become a mother one day.

Cristina, who now lives in Spain where does the waitress, with the presenter first of all commented on the enormous media hype that arose from last week’s television chat. The 34-year-old Sicilian he feared the public reaction to her decision to abandon religious life, so she was surprised by the avalanche of love received in the days following the broadcast of the episode: “I was afraid of disappoint all the people who had believed in me, instead many wished me a “good life”, a beautiful thing – she told Silvia Toffanin excitedly -. It’s as if a weight has been lifted off me, I was afraid of having to give explanations, but I felt welcomed and also protected”.

The rebirth after the farewell to the veil

Then Cristina recounted the first emotions experienced immediately after deciding to change lifewhen she set out to discover a world that – after years spent in convent – for her it was totally unexplored: “Rent a house, see if I could make ends meet, it was all a challenge myself – he recalled -. I have some friends that I went drinking with for the first time, a dance all together… Even the nose piercings, done a few months ago, is part of those first times. She helped me express my determination and it is a sign of this very delicate moment of change “. Scuccia then added that once the veil was removed, it was”felt reborn” and who today lives “every moment without fear of the past”.

The hope of becoming a mother

The farewell to the veil has given way to one beautiful womanSilvia Toffanin then observed. “But I have avery low self esteem, I don’t feel beautiful – replied the singer -, but my face is very relaxed now. You see a beauty that comes from within.” Then, the host pressed her about her love life, asking her about the existence of a special “he” in her life, or at least of some suitors. “There are some people who try in some way, but I don’t feel 100% ready yet, maybe because love has not arrivedwho knows” was Cristina’s answer, who in closing dedicated a tender reflection to her desire to become a mother. “There is a sense of motherhoodif anything, one day will come, why not, but step by step, I still have to adapt” concluded Scuccia.

It may also interest you

The former Sister Cristina gives an encore to Verissimo: “I have been reborn after removing the veil”