It is an uninterrupted parade of subjects and admirers who enter and leave Westminster Hall in London by the thousands to pay their last homage to Queen Elizabeth IIwho died on 8 September at the age of 96. After yesterday’s royal procession and the opening to the public of the funeral home – scheduled for 4 days until the funeral and burial of the sovereign on Monday 19 – the queue stabilized this morning, under a gray sky, for a length of about 5 kilometers on the banks of the Thames: fed by people of all ages.

“The queen prayed for everyone, she had great faith”. Justin Welby, the archbishop of Canterbury and primate of the Anglican church, of which Elizabeth II was head as sovereign, told Sky News. (HANDLE)

The tribute of men, women and families in front of the coffin goes on relentlessly between bows, prayers and tears. All under the surveillance of a capillary security apparatus, but all in all discreet. And in a prevailing atmosphere of meditation. There are currently no significant incidents reported.

A day off from official commitments for King Charles III and the Prince of Wales, William, the new heir to the British throne, after a week of non-stop public events following the death of Queen Elizabeth. Events imposed by the need to share the mourning with the subjects in all 4 nations of the United Kingdom and to complete the first steps of the succession that kept the almost 74-year-old Carlo in particular under pressure – in a moment of strong personal emotional impact. The sovereign moved today with his new queen consort Camilla to the country residence of Highgrove, in English Gloucestershire – their buen retiro for years – for a day of more intimate recollection in memory of his mother, according to court sources. While William headed with Kate and their three children (George, Charlotte and Louis) to the greenery of Sandringham, Norfolk. Instead, two of Charles’ brothers remain ‘on tour’ on behalf of the dynasty: Princess Anne, who has returned to Scotland – where Elizabeth II died – to receive the condolences of local communities and charitable associations sponsored by the family; And Prince Edward, expected today with his wife Sophie in Manchester, second urban area of ​​England, from a similar agenda.

New crowd bath for William and Kate at Sandringham. The new princes of Wales found several hundred people to welcome them, gathered around the royal property to lay bouquets of flowers, tickets and objects in memory of the deceased sovereign. A mountain of memories and messages of affection that William and Kate went out to inspect, with expressions at times smiling at times moved, then stopping to exchange words and handshakes with some of those present crowded behind a barrier. Meanwhile, in the capital, Buckingham Palace has announced that the ritual of the solemn state funeral on Monday 19 will close with two minutes of silence in honor of Elizabeth II. 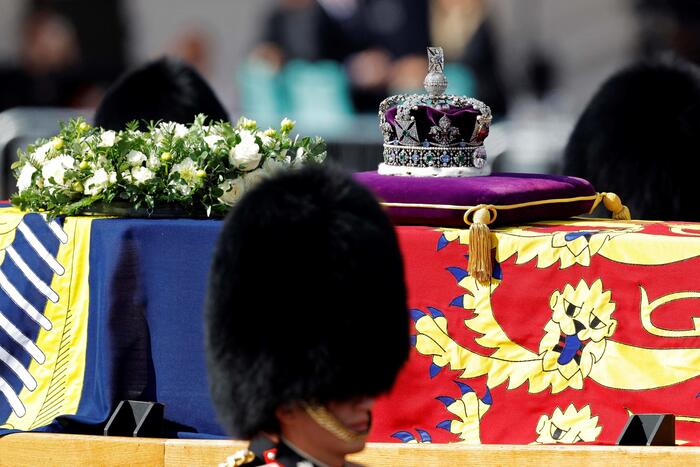 The President of the Italian Republic Sergio Mattarella phoned King Carlo III today. “During the conversation – reads the statement – President Mattarella renewed the deepest condolences of the Italian Republic and his personal ones for the death of Queen Elizabeth II”. “The Head of State recalled the Sovereign’s visits to Italy and personal encounters as well as the friendship shown towards our country during the years of his reign. The President also expressed good wishes to Charles III for the beginning of the Kingdom”.

The long farewell to the Queen, thousands in Westminster. William and Kate in Sandringham – World