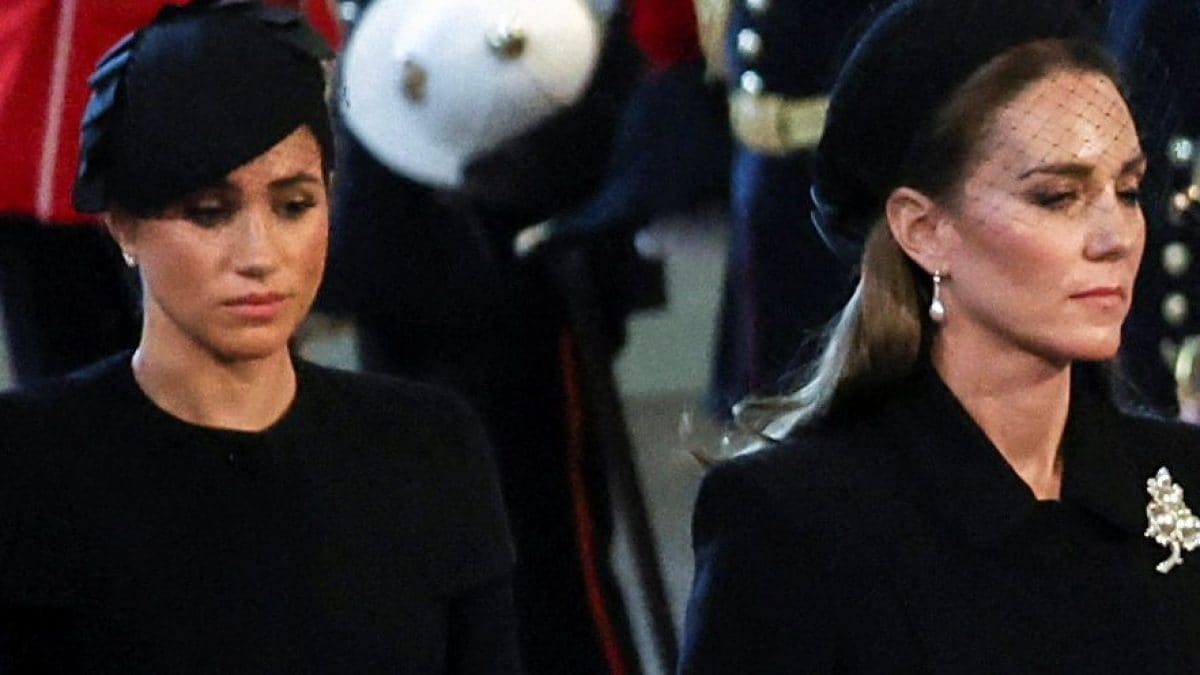 Kate Middleton and Meghan Marklejoined in last travels of Elizabeth II, at Westminster Hall they had in common only total black, pearls and the head covered by a hat. However, their emotions in front of the Queen’s coffin are different.

As emotions are conveyed through facial expressions, body and postural changes, it is their body language that speaks.

Read more from this author

The facial micro-expressions of Kate Middleton and Meghan Markle

The face is the most noticeable part of the body in every person. And, moreover, the perception of faces is one of the first skills that develops after birth.

For this reason, its decoding is essential to be able to interact with others and move in the social world as you grow: you choose who to love, who to trust and who is the culprit based on the study of facial expressions. What do Kate and Meghan’s faces describe?

Kate Middleton’s face showed signs of pain: the features of her face were contracted, her mouth furrowed, her eyes half closed in an unconscious attempt to stop the tears coming out. Her lips were tightened.

An attempt by the new princess of Wales not to let go of the pain and emotion of those situations. Moreover, that Kate was holding back her crying was evident every time the camera framed her: she swallowed continuously. A composure worthy only of a future queen.

Unlike Kate, whose body language communicates the authenticity of his emotionson the other hand, the behavior held by was more theatrical Meghan Markle. His Hollywood background was evident. Her facial mimicry, her lips turned upwards, the excessively prolonged expression of pain allow us to affirm her not total authenticity of the emotion itself.

In fact, true emotions last no more than a few seconds. Conversely, if an expression lasts for a longer period of time it is not true. The emotions on Meghan’s face appeared much more prolonged than a few seconds. But the differences between the two sisters-in-law do not end only in relation to the micro-expressions of her face.

The bow of Kate and Meghan

Even to an inexperienced eye it will not go unnoticed the difference of the bows in front of the coffin of Elizabeth II. Compound and content, as per protocol, that of Kate. Definitely more blatantas well as contrary to etiquette, Meghan’s bow.

In this sense, the woman has probably gone too far in making the gesture of respect towards Henry’s grandmother seem heartfelt and pregnant. Sorting, at least for behavioral analysts, the opposite effect.

This is also the reason why Meghan looked down at the prayer book during the ceremony. Probably for fear that someone would notice the difference between her and Kate Middleton.

Kate and William, Meghan and Harry

The two royal couples are so different. From the very first public appearances, Meghan and Harry they manifested gestures of affection in public. A succession of precautions and attentions characterized by the essential physical contact.

And, as expected, also a Westminster Hall the couple did not change their habits. Hand in hand to counter the mix of emotions that undoubtedly went through them on such a solemn day.

Kate and William, in compliance with the protocol that prohibits real public displays of affection, they limited themselves to brushing their shoulders. No other sign of public closeness. After all, I am the future queen and the future king.

Doctor Anna Vagli, jurist, forensic criminologist, journalist-publicist, expert in investigative psychology, technical inspection at the crime scene and criminal profiling. She is certified as an expert in applied neuroscience from Harvard University. Scientific director of the master’s degree in criminology in partnership with Studio Cataldi and Legal Education

Theatrical Meghan, Sorrowful Kate: how gestures, expressions and bows reveal how different they are