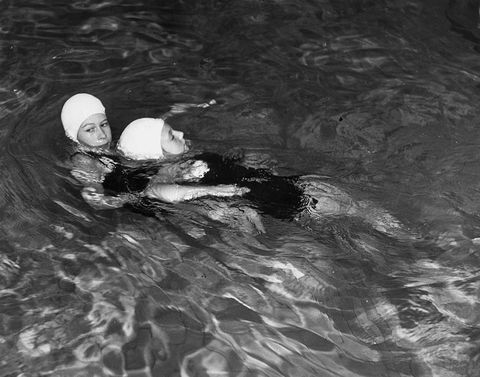 The newest of his swimmers is the prince Louis, but before him, even his little sister Charlotte and little brother George started to happily splash around in it, starting at one year of age. Before that, in the Buckingham Palace secret poolPrinces William and Harry, Prince Charles and his brothers, and Queen Elizabeth with her sister learned to swim as children. In addition, Lady Diana retired to relax, while Prince Philip did not miss a daily swim as long as his age allowed it. In official residence of the British Crown there are 775 rooms and it is said that in some of them no one has set foot for decades, even that the queen herself has never been able to visit them all, also because in one part the staff members have always lived there and cannot be expected to violate them privacy. But one of the most mysterious environments of Buckingham Palace is the one that is known to exist only thanks to the confessions of the most trusted employees who are allowed to immerse themselves every now and then in what is, in effect, the Queen Elizabeth’s private poolthe most exclusive in the world because there is not enough money to pay to enter it, it is a privilege that only a few commoners chosen by the royals can enjoy, strictly respecting some rules.

A very young Princess Elizabeth supporting the Children’s Challenge Shield rescue contest at the Royal Bath Club in London in 1939, to which she finished first.

That is: never enter when one of the members of the royal family is already inside, and leave immediately if one arrives, unless the royal himself invites the staff member to stay. But above all, it is strictly forbidden to take pictures inside, which makes this one mysterious royal swimming pool even more fascinating because one wonders how it is made. What is known for sure is summed up in a handful of information, which includes the location and year of construction. There Queen Elizabeth’s private pool it is located in the northwest pavilion of Buckingham Palace which protrudes from the building like a wing, and we know from the stories of those who have used it that it is very simple, with no beds and no modern additions, no whirlpool. It was built in 1938 by the will of George VI, the “king by chance” that with his wife Elizabeth Bowes -Lyon he had planned to raise their daughters Elisabeth and Margaret Rose in great freedom and serenity, planning to remain the Dukes of York for life. The couple encouraged the girls to play sports, to love the outdoors and to swim. But after the abdication of Edward VIII and the ascension to the throne of George VI, Elizabeth had become the heir to the throne and if she dived into a shared pool or did outdoor sports she became an object of curiosity.

The rear façade of Buckingham Palace where you can see, at the bottom left, the former greenhouse which since 1939 has housed Queen Elizabeth’s private swimming pool.

Prior to their father’s coronation, Princesses Elizabeth and Margaret took swimming lessons at the prestigious Bath Club in London where the future queen, who was very strong in breaststroke, had earned her sea lifesaving license. But after her move to Buckingham Palace it had been impossible for her to continue living as before her. The king papa, who doted on them, entrusted the architect James Jack Roberts with the task of building a swimming pool in the royal palace in place of a historic greenhouse, the Nash Conservatory, which was moved brick by brick a little further. And also a nice squash court on the north side. The only information on the design comes from a communication between the then Minister of Works, Sir Philip Sassoon, and King George regarding the coating of the glass mosaic tiles which were eventually approved as “unglazed and green and black. “. Then the king hired a personal instructor for the two daughters, and the problem was solved. The swimming pool was inaugurated in 1939, George VI had it found as a surprise to his girls on their return from holidays in Balmoral. Since then, that’s where all royal babies have learned to swim, apart from a forced hiatus when it was damaged by the bombing of London in 1940 and then repaired after the conflict ended. And that’s where the then Prince CharlesAs a child, he once invited his schoolmates for a memorable “regatta” of wooden boats. Everyone brought one built by themselves or by their dads, proud of the invitation. But when they were there, the future king produced a superb model of the royal yacht Britannia full of details. “And that day,” he told al Daily Mail Richard Alston, one of the prince’s former schoolmates, “we all learned that sometimes life can be very, very unfair …”.