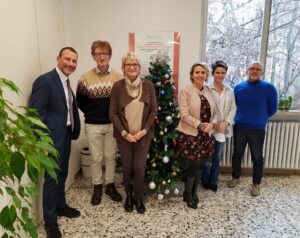 Doctor Roberto Salati, born in 1963, after graduating from classical high school he graduated in Medicine and Surgery at the University of Modena. Specialized in Neurology and a few years later in Psychiatry, he has been a SMIPI certified hypnotist psychotherapist since 1998 and an ordinary psychoanalyst since 2013. He worked as an on-call doctor and substitute General Practitioner from 1989 to 1992, then as a Psychiatrist specialist in a private nursing home. For Reggio Emilia Ausl he is an expert on psychological-psychiatric disorders in adolescence, consultant in the residential structure for adolescents with mixed Ausl and private social management and has been working for years for the Mental Health Center and for the Diagnosis and Treatment Psychiatric Service. He has been operating at the Correggio Mental Health Center since July 2020.

Doctor Francesca Fontana, born in 1974, after scientific high school diploma she graduated in Medicine and Surgery at the University of Modena and Reggio Emilia with an experimental thesis entitled “Study on the quality of mother-child attachment in a gypsy community”. Specialized in Psychiatry, the professional then obtained the title of “Doctor of research” in 2009 with a thesis entitled “Intellectual disability and paths towards antisocial activity: clinical ideas and reflections for an effective therapeutic intervention”. Since 2008 you have been employed as a psychiatrist by the Ausl. You worked for several years in the Diagnosis and Treatment Service. Since 2017 she has been working at the Mental Health Center (CSM) in via Petrella in Reggio Emilia where in 2018 she became Head of the Simple Structure.

Best wishes to the three new directors for their work from the Director of the Department of Integrated Mental Health and Pathological Addiction, Professor Gian Maria Galeazzi, and from the Reggio Emilia Ausl IRCCS Directorate.