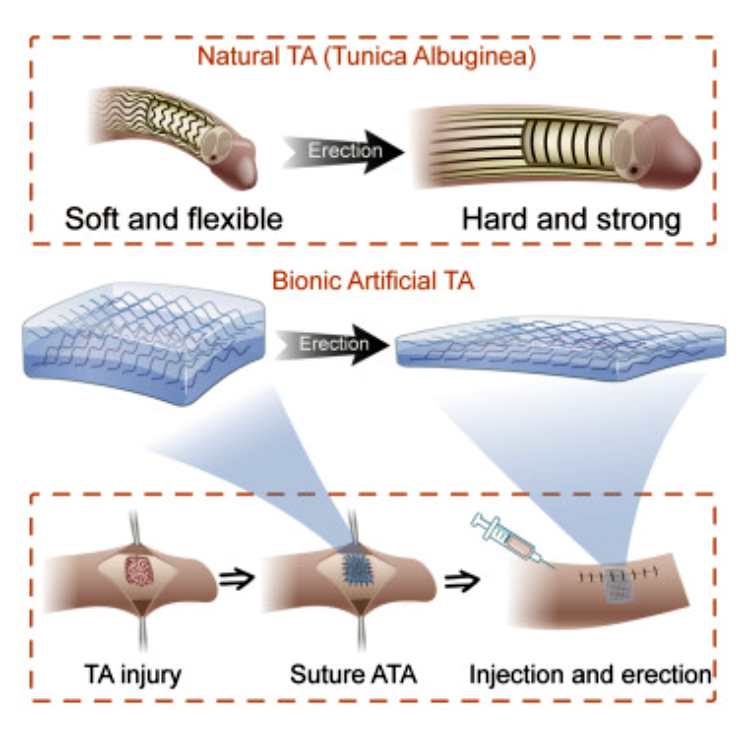 Erectile dysfunction is the inability to achieve and/or maintain an erection adequate for successful sexual intercourse. A disorder caused by psychological or organic factors (or both), which affects 40% of over 50s and 50% of over 70s. Some experience Peyronie’s disease (it affects 7% of Italian males between 50 and 70 years old ), characterized by the abnormal formation of fibrous-scar tissue in correspondence with the cavernous bodies, which gives rise to the so-called “curved penis”. This condition is usually treated by grafting tissue from other parts of the patient’s body into the penis to replace the damaged area. But more often than not the immune system rejects these successful grafts of foreign biological material, causing new problems such as shortening of the penis.

A breakthrough in the treatment of this disease, and other forms of organic erectile dysfunction, comes from a research team from the Guangzhou South China University of Technology (China), which has developed a synthetic tissue (a kind of patch) that mimics the natural fibrous tissue needed to maintain an erection. The tissue – called “artificial tunica albuginea” (or ATA) – has been shown to repair lesions and restore normal erectile function in pigs. According to the researchers, this bionic patch could pave the way for new therapies to repair penile injuries in humans as well. The results of the trial were published in the journal Matt.

How does the penis stay erect

The mammalian penis is made up of a hydrostatic skeleton (which maintains the balance between the fluids) called Tunica albuginea (TA), a sort of “lining” which covers the cavernous bodies of the penis (which fill up with blood). The AT is an elastic but very resistant structure, which favors the maintenance of an erection thanks to the passage of the veins through its structure. When the corpora cavernosa fill with blood and stretch, the TA stretches to its limit and in this way strangles the veins that cross it, so as to keep the blood inside. In this way the penis reaches full erection for the entire duration of intercourse.

The shape of the penis is therefore decided by the arrangement of fibrous tissue within the hydrostatic skeleton which can resist external deformation when the penis is erect. However, the Tunica albuginea can suffer injuries due to a traumatic break (the so-called “penile fracture”) or undergo shortening as happens in Peyronie’s disease. In these cases the penis may become deformed and unable to maintain an erection.

To address these ailments, researchers at the Guangzhou South China University of Technology have developed an artificial Tunica albuginea (or ATA). A synthetic fabric, based on polyvinyl alcohol, which has a structure of curled fibers similar to the natural Tunica albuginea and the same biomechanical properties. The researchers then carried out laboratory experiments to study the toxicity of the artificial tissue and its compatibility with blood vessels, as it was designed to remain in the body for a long time. Once they saw that it was not harmful to other tissues, they tested it in Bama dwarf pigs with lesions in the Tunica albuginea (fibrous tissue of the penis).

If you have low sex drive you may live less

How the bionic patch works

The new ATA patches have successfully restored the erectile function of pigs, showing that they can efficiently mimic the functionality of the natural fibrous tissues of the penis. One month after the experiment, the researchers checked the effect of the patches, and discovered that the ATAs had not restored the microstructure of the surrounding natural tissue, but had developed a fibrosis (formation of large quantities of fibrous-connective tissue) comparable to that of natural tissue and allowed to achieve a normal erection after a saline solution was injected into the penis.

“Historically, tissue grafts used to treat damaged Tunica albuginea tissue were subject to rejection and poor function because their microstructures did not match those of the surrounding tissue,” said study author Xuetao Shi. Therefore, we were surprised by the excellent results of our experiments, in which the animals’ penises regained their normal erection immediately after using the ATA.”

Gender: what is “sheet syndrome”, which affects 2 out of 10 men

Research still has a long way to go to establish the long-term efficiency of this bionic patch, as breakage is a possible risk. Although the ATA patches need to be tested for biocompatibility before being tested in humans, the research team believes that this new technology will bring important benefits to male reproductive health.

“Our work at this stage focused on repairing a single penile tissue,” Shi explained. “The next stage will be to consider repairing the general penile defect or building an artificial penis from a holistic perspective.” .