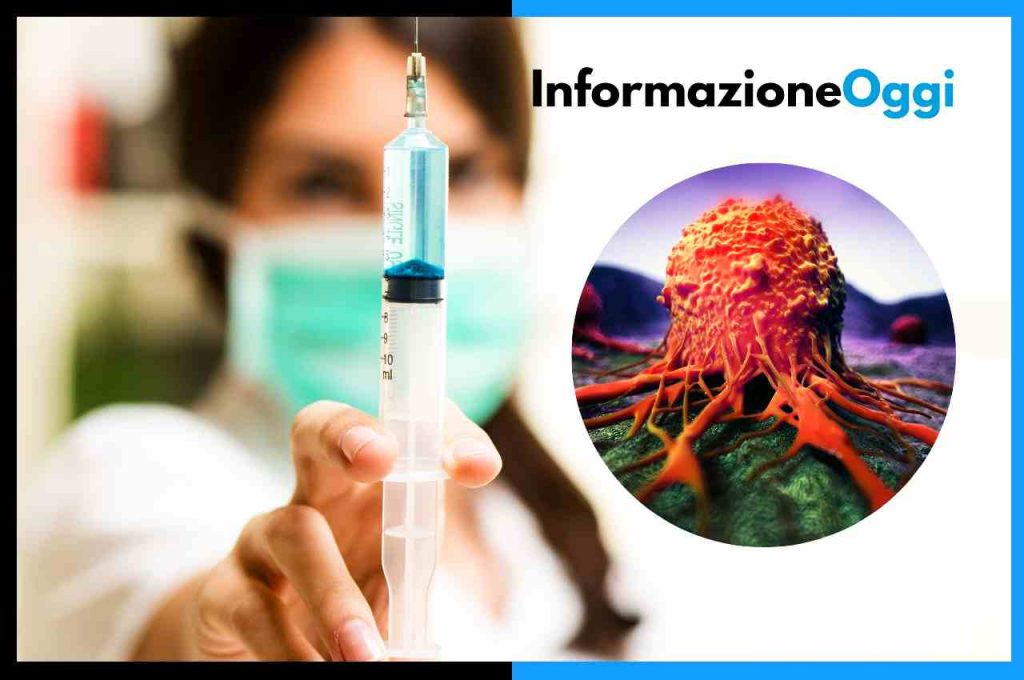 Do mRNA vaccines cause cancer? Perhaps the ongoing cancer epidemic is not a coincidence: here are the revelations of a well-known oncologist.

Let’s take a deep breath before starting this journey that leads us to better understand what is happening to people’s health.

In recent days, as we know, many media have launched warnings and alarms: there is an ongoing “epidemic of cancer”.

We know very well that cancers don’t spread like the flu, so how is it possible that they have increased so much? The question certainly cannot be ignored and Medicine is looking for an answer. But among the various hypotheses, one emerges that no one would have ever wanted to think about. Maybe mRNA vaccines have done damage that is starting to show now, and the worst thing is that we could only be at the beginning.

Let’s sit down, e let’s take stock of the situation for a moment. Since the outbreak of the Coronavirus, our lives have certainly changed. Unfortunately, the pandemic has led to many deaths all over the world, but not only. Governments have radically changed their way of governing peoples. The approach to health and research has also changed.

Unlike what has happened so far, we have seen a single thought, a single solution offered by the media, politicians and pharmaceutical companies. Those who dared to raise doubts about the very origin of Covid or about vaccines have suffered media pillory, and fundamental rights have been canceled. Like that of freedom of choice in the face of an experimental health treatment. And here we come to the vaccine speech.

The statement is strong, bursting, and it gets straight to people’s fears. What we explain below is certainly not a “conspiracy” theory, but it refers to words disclosed to the press by a famous oncologist, Patrizia Gentilini. Which it brings anyway to guarantee his declarations also numerous studies, official data of the ISS and global health authorities.

During an interview, tries to give an answer to what is now under everyone’s eyes. We are getting sicker and sicker, more and more people are dying, and this is also happening to children and very young people.

Why is there talk of a cancer epidemic?

THE data released by experts leave no room for doubt: in the last two years, cancers have struck 14 thousand people more than in previous years. In Italy, cancer is the second cause of death after cardiovascular disease. Although Medicine has made enormous progress, we are faced with one terrifying statistic: now 1 in 2 men and 1 in 3 women are destined to be diagnosed with cancer during their lifetime. And the most terrible thing is that cases are also increasing among children and adolescents. Something never seen before. Especially with regard to young people, perhaps mRNA vaccines cause tumors: it is one of the theories under consideration by experts, because such a thing had never occurred in the literature.

What are the causes of this sudden increase in tumors?

They are the ones who end up under the magnifying glass of the researchers: the mRNA anti-Covid vaccines. The English scientists have carried out some investigationswhich we also find on Eurostat data, and what has emerged is disturbing. According to CMSi, we find “Unfavorable trends between country vaccination levels and total mortality, also due to the association with booster coverage levels”. To put it simpler, where there have been more vaccinations more people have died, from all causes.

Experts, as it should be, don’t want to find a “scapegoat” but are looking for sensible and balanced answers. Dr. Gentilini explains that getting sick with cancer can happen for various reasons, one of which is pollution. In a recent article we talked about the dramatic situation of our environment. At this point air, water and earth are so compromised that we ingest, breathe and drink toxic substances every day. Therefore, it is much more likely that the body will respond with disease.

Furthermore, according to the words of the oncologist, there are studies that confirm just that. “Living in a polluted area represents an absolutely non-negligible risk factor. Quite recently the above considerations have found ample confirmation in one study.”

The negative effects of lockdowns

Under examination by the experts there is also the consideration on damage caused by lockdowns and total healthcare upheaval. We remember the terror, the fear, and the troubles of living a normal life just in the last 3 years. The collateral damage of the political handling of the pandemic has affected people’s bodies and minds. Mental disorders have increased, especially among young people. And the disservices in the health sector – which was already not working very well – led to delays in diagnosis and inadequate treatment.

We then recall that the pandemic has also caused poverty. People lost their jobs, then there was war and inflation, and families cannot find the resources to take care of themselves. They also decreased their spending on food, buying poor quality food to save money (and it’s still happening today) and had to giving up socializing, exercising, or moving outdoors.

1+1+1… put all these factors together and we will immediately realize that we have suffered, and are suffering, an attack on our well-being, physical and mental. But that’s not all, unfortunately. A shocking truth is emerging, which makes us understand that (perhaps) pharmaceutical companies have played with our health. And the governments have kept silent. And it’s still happening.

Do mRNA vaccines cause cancer or not? The theories of Dr. Gentilini and many of her colleagues

The words of the well-known oncologist are thundering among the various press organs. But I’m there voice of many prestigious doctors and experts whose mouths have been “shut up” up to now.

Something scandalous happened during the handling of the pandemic: pharmaceutical companies have proposed an experimental therapy and no one has been able to raise doubts about its effectiveness. Many doctors, professionals of the highest caliber have always asked for a scientific comparison, which never happened. People had to undergo an experimental treatment, of which any long-term side effects are not yet known. An abomination which, even worse, has happened worldwide.

The doctor’s statements they are clearly understandable by anyone. “since the administration of mRna vaccines against SARS-CoV-2 began, we have witnessed a rapid recovery of tumors previously under control or the onset of even very aggressive tumor forms. For example in this work two cases of aggressive Non-Hodgkin’s lymphomas are described, which arose in a tumultuous way a very short time after the administration of mRNA vaccines.”

On why vaccines can cause cancer (and who knows what else), the doctor gives an equally simple and understandable explanation, even by non-experts. mRNA vaccines they had been around for some time, but the purpose was to use them precisely to treat tumors. Only, and no one had said so far, they had achieved poor results.

THE mRNA vaccines for infectious diseases had never been used. Yet, governments have allowed pharmaceutical companies to produce them and to obtain authorization very quickly.

Not only that: the experts themselves they still don’t know how Spike protein is produced by the body, induced by the vaccine to do so. It is not known from which cells, nor for how long it remains in the body, nor in which parts of the body it can cause damage, from minor to fatal.

What is written in one study published in the National Library of Medicine it’s really shocking. “Both vaccine mRNA and protein S were detected in axillary lymph nodes up to 60 days after the second dose of mRNA-1273 or BNT162b2 COVID-19 vaccines, and at least one preliminary study claims to have iidentified protein S in blood samples by proteomic analysis up to 6 months after mRNA vaccine administration. If vaccine-induced protein S production occurred for that long, then the plausible time window for assessing causality of suspected adverse reactions following vaccines a COVID-19 mRNA should be suitably extended“.

The result of the wicked policies of all governments, “led” by pharmaceutical companies? Millions of healthy people have had to be given an experimental drug. Which, as even stones have now understood, do not work against Covid.

But evidently mRNA vaccines cause tumors and who knows what else.

Returning to another scientific explanation, Dr. Gentilini reports study data and states the following. “In fact, it is now established that the vaccine-induced Spike protein has a pro-inflammatory action and can interact with complex biological functions of the organism, in particular by interfering with the production of cytokines, substances that modulate the immune system. In particular, the immune surveillance towards tumor cells would be altered following the decreased production of interferon, but there would also be an exaggerated production of a growth factor“.

In these two very long years, many researchers, doctors, accredited specialists have tried to have their say. To stop a phenomenon that was becoming worrying: the dogmization of a health treatment. To the children hey babies, despite not being in danger from Covid, an experimental treatment has been inoculated. We do not know if and what physiological damage they will develop during their lifetime.

We also remember the “advice” to get vaccinated also given to pregnant women. We will never know, perhaps, if theincrease in abortions it is due precisely to the experimental treatment. We will only know later whether the vaccine will cause health problems for babies born to vaccinated women. But we know that the anti-covid vaccine caused menstrual cycle disturbancesand therefore it means that affected the fertility of women. In what kind of entity, for now, we do not know.

The economic interests that have exceeded those towards people’s lives

In such a terrifying picture of truth that are coming to the surface, it is impossible not to wonder why. The question arises: Did the pharmaceutical companies think only of profit? Everyone can find the answer for themselves, simply by thinking about everything that has happened in these three years.

Dr. Gentilini has her say: “If we think that by definition a vaccine should be administered to healthy people and a drug only to those who are ill, we understand that the population basin is much larger in the first case. However, I think that Big Pharma’s interest is on both fronts and if the “vaccine” then weakens the immune system and therefore makes the population more fragile and sicker, I would say that the circle closes“.

A truth that no one would ever want to hear. A deep betrayal towards the citizens’ trust in institutions and medicine. But maybe a global awareness will change things. The important thing is to start.

mRNA vaccines could cause tumors: the study

Young man eats a sausage and ends up in intensive care: red alert in Italy - solofinanza.it
Covid, addio mascherine in ospedale. Ma i medici comaschi non sono d’accordo
Nobody knows, but if you eat these things you keep the mosquitoes away: "crazy"
Tweet
Share
Share
Pin