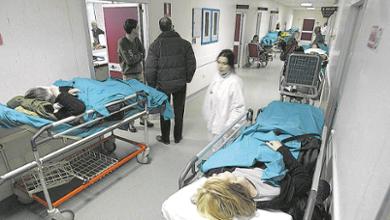 “And what’s new?” The sense of the comments arrived at The print on the reportage in the lane “The Odyssey of Molinette” it’s all here. In recent days, the Turin hospital has reached a peak of 240 accesses in 24 hours, between unsuitable spaces and too many green codes, caused by the flu but not only. The emergency, however, for readers is “on the agenda”. And throughout Italy. Eternal waiting despite the pain that drove them to the emergency room, visits to relatives “abandoned on a stretcher”, the right to health that is missing, with hospitals in precarious conditions and without oxygen, personnel, spaces to take care of those who are ill. A story that repeats itself, not only since the 2020 pandemic: “Italy is full of Molinette: public health is always worse and with this government things will only get worse”.

Trip to the Molinette emergency room: “I’ve been waiting for a bed for 2 days, maybe tomorrow they will find it”

Stories from Turin
“It is certainly nothing new – reiterates Susanna D’Agostino – my father at the age of 93 in November remained on a cot for days with a stroke and Alzheimer’s patient in the emergency room”. The hospital was San Giovanni Bosco in Turin, as for Cristina Verolla: «In 2017 my mother was on a stretcher for 3 days and when they finally admitted her they said to us “look, your mother is dying”. When I went to see her in the emergency room in that little room full of stretchers with other poor people my heart ached, she will never forget her eyes on that stretcher ». Serena replies: «Ditto my father: five days on a very hard stretcher. He died a week later, aged 65 ». Stefano Ballarin, from the Martini hospital in Turin, denounces: «My 84-year-old mother waited for a bed for seven days, seven days on a stretcher Where there used to be rooms in the Medicine ward there are now clinics: there is something that does not add up and Covid has taught us nothing ».

in the rest of Italy
From Milan to Southern Italy, passing through Rome, the stories do not change: «In the summer of 2019 my 93-year-old father was waiting for a bed – says Camilla, speaking of the emergency room of the Sacco hospital in Milan – from the morning from Thursday until Saturday morning”. Medical and nursing assistance “was excellent”, as in many other cases. But “the Rubik’s cube of healthcare”, the interlocking game between triage, beds, stretchers and personnel, is almost impossible to solve. «In Calabria the situation gets worse every day – admits Lucia Laface – as it is now in the rest of Italy. I think this issue is being underestimated. Our constitution provides for the right to health which unfortunately is gradually taken away from us ». «You have no idea of ​​the waiting times in the emergency rooms of Rome – Roberto denounces – My father, 92 years old, stayed in the emergency room for three days to then be discharged with Covid and high fever. They were in disarray.”

Coin-operated doctors with non-equivalent titles in Italy, alarm in the local health authorities

“Internal freelancing doesn’t work”
Vittoria Emanuela claims that «We must also thank and not always complain, with colic and the flu I went in in the evening and out in the morning and everyone was kind». But that is not always enough, and between those who propose to “remove the closed number from the Faculty of Medicine” and those who blame the governments’ continuous cuts to healthcare and structures that are “no longer suitable”, the voices of those who lane has been working for years. Like Alberto Censon, 40 years old at the Molinette hospital in Turin, who accuses: «Everything starts from the outsourcing of services such as plumbers, bricklayers, canteen: first you called the internal one and in half a day the technicians arrived. Now those who work in hospitals have to make the call, hope they don’t have other commitments, and everything gets longer ». The real problem, however, is «the internal free profession, which didn’t work. All transversely worked to increase the external convention, towards a Private Healthcare. And it is no longer convenient for doctors to work in the public sector…” Annamaria Saviori, from Como, agrees: «In fact, specialist visits are increasingly a mirage, but if you pay for them… you have them on the fly». The chorus is practically unanimous: Italian healthcare has been bleeding for years. And the bleeding doesn’t stop.

China, hospitals overflowing due to Covid: patients treated on the street in Shanghai

Odyssey at Molinette, the stories of readers from Italian hospitals: “I will never forget the eyes of a mother abandoned on a stretcher”