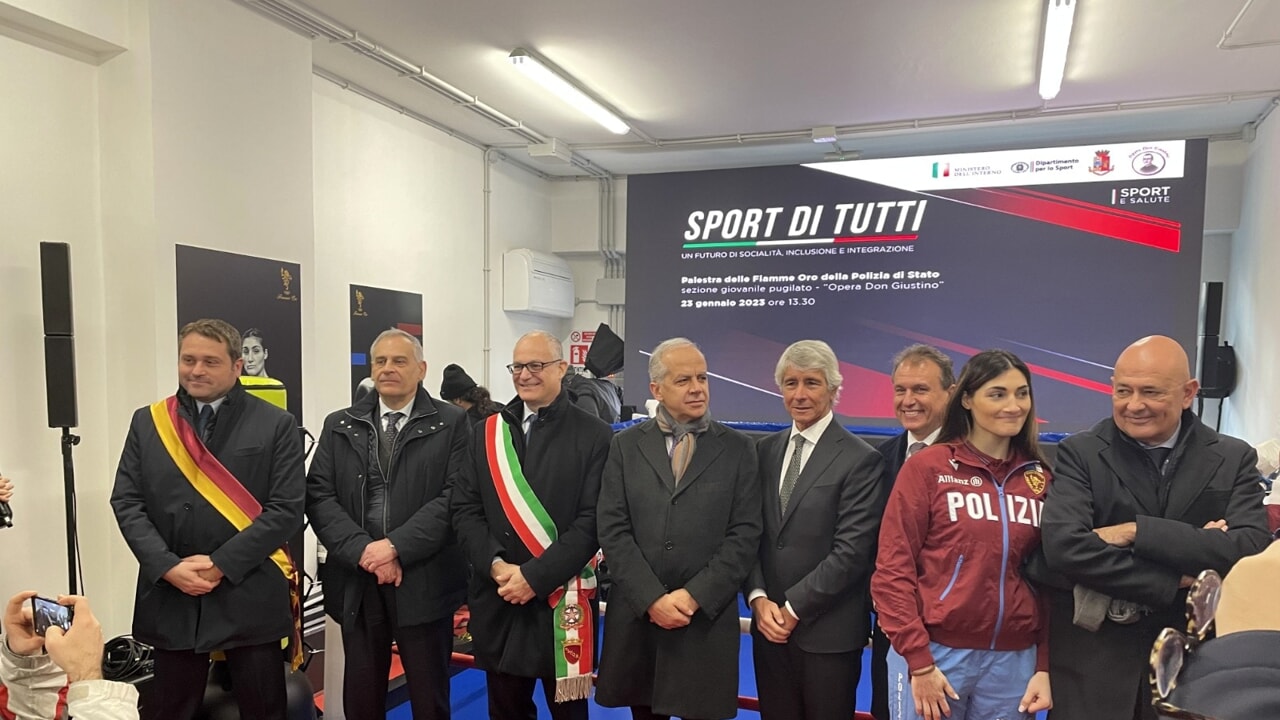 Ribbon cutting at San Basilio for the ‘Palestra della legalità – Opera don Giustino’. The premises in via Carlo Tranfo, once an occupied space and a place for drug dealing, have become a symbol of redemption. At the appointment, also the Minister of Sport, Andrea Abodi who commented: “I hope that this initiative can be an example and can also be a tool that nourishes hope for the younger generations”.

The clearing of the premises in via Tranfo

It was August 2020 when the premises in via Tranfo, one of the streets in the popular district of the capital, were cleared – because they were illegally occupied – and handed over to the Municipality. On that occasion, the then mayor of Rome, Virginia Raggi – in the company of Don Antonio Coluccia and boxing champion Roberto Cammarella – had announced the birth of a boxing gym with Golden Flames. In January of the following year, an agreement was signed between the Campidoglio and the Fiamme Oro to establish the space. Four months later, finally, the assignment of the premises to the sports group of the state police. Between September and October, Don Coluccia denounced intimidating acts at the gym in via Tranfo: “They set a drawing with rapid cement, two eyes with a one euro coin, a 50 cent coin and a cap as a mouth. As if to say ‘you must stay silent’. We go forward. He doesn’t go back” he explains to our newspaper the ‘priest courage’. Ribbon cutting on Monday morning.

At the ribbon cutting Roberto Gualtieri: “Here is an extraordinary example of collaboration between different institutions and political forces. This building in Roma Capitale was occupied. The mayor who preceded me had it cleared, and we carried on with our task. Sport and Health has made this institute accessible and beautiful, while the police offer the availability of teachers. This is a garrison of citizenship. For us, sport is citizenship” said Roberto Gualtieri underlining the importance of the role of citizens. Also present was Virginia Raggi, group leader of the M5s in the Capitol: “We cleared it and returned it to the citizens. Now, after the important result achieved during our union, this space is finally reborn and becomes a home of sport, health and values, with many young people who will be coached by the best coaches of the Fiamme Oro. A beautiful legacy that we have helped to leave in a city that otherwise lies still”. Roberta Della Casa, M5s group leader in Municipio IV, also commented on the inauguration: “I am happy to have contributed to this, which is an important result in a difficult neighbourhood. Today was an opportunity to present San Basilio to the mayor and ministers who will probably they were unaware of its existence. I hope it’s not just a commercial and that the presence of the State in this neighborhood becomes normality as it was during the Raggi Giunta. Legality is not a flag but a constant commitment”. The mini-mayor of Tiburtino Massimiliano Umberti also cut the ribbon: “This initiative is an important signal for the neighborhood and for the entire Municipality. Creating outposts of legality is the mission that we must set as a priority starting today for the next 4 years”.

“Sports and Health is in San Basilio to reaffirm the right of sport for all and for all. The Legality Gym that we are inaugurating today represents the ability of sport to be at the service of others in an area of ​​special degradation and on the margins” said the president of Sport and Health, Vito Cozzoli, at the inauguration of the Legality gym. , active since 1993, brought its contribution to San Basilio: “In a border area, on the margins, of drug dealing, in many areas under the control of crime which means a climate of fear and insecurity for the many honest citizens of the Neighborhood. In this case, sport is called to do good for the territory and for the people who live there” explained Cozzoli.

For ‘Sport e Salute’ the goal to be achieved is to create sports teams instead of clans, “respect for the rules instead of the law of the fittest, healthy social relations rather than the sale and consumption of drugs. At San Basilio we raise the bar, let’s one more shot, we stop the clock a second earlier than usual. Let’s try to do it with this gym, which ‘Sport e Salute’ is proud to have participated in. A defense of legality that joins the traditional venues,” he added. There are many projects that ‘Sport and Health’ intends to carry out for this year. These are ‘targeted’ investments because “inactivity is stronger in areas of social hardship. Sport that leaves no one alone or at least tries to the end, down to the last drop of sweat as in competitions. I can announce that Alerts for 15.7 million are already starting tomorrow” said Cozzoli. These are ‘Sport for all’, specifically the coveted ‘Quartieri’ for € 3.7 million’, the coveted ‘Inclusion’ € 2.4 million, again the coveted ‘Prison’ for € 3 million. And finally, Sport in the parks € 6 million. In addition to the 4 million euros already allocated to social inclusion projects and disadvantaged suburbs.

The ministers of the interior and of sport also attended the inaugural ceremony. “Sport must also contribute to the excellence of national sport starting from the bottom up. I am sure that this gymnasium will do very well and I hope that in a few years some young people who started here will find them in the Olympic medal collection. Dealing with Rome’s issues as prefect is “It was a source of great pride for me. And perhaps the passion it aroused in me has now led me to hold this position,” said Minister Matteo Piantedosi. His words were echoed by those of the Minister of Sport, Andrea Abodi, who presented the projects subject to tenders: “As a government, we feel a sense of duty and collaboration. We are a collective instrument of policies that can generate further collaboration. Sport must give answers”.

Ribbon cutting for the gymnasium of legality in San Basilio

Intermittent fasting is not as effective in losing weight as eating less at all meals
Training with Fitness +: how it works, how much it costs and all the 2023 - iO Donna news
A devious epidemic affects 60% of the population, the WHO warns: it must be stopped immediately
Tweet
Share
Share
Pin