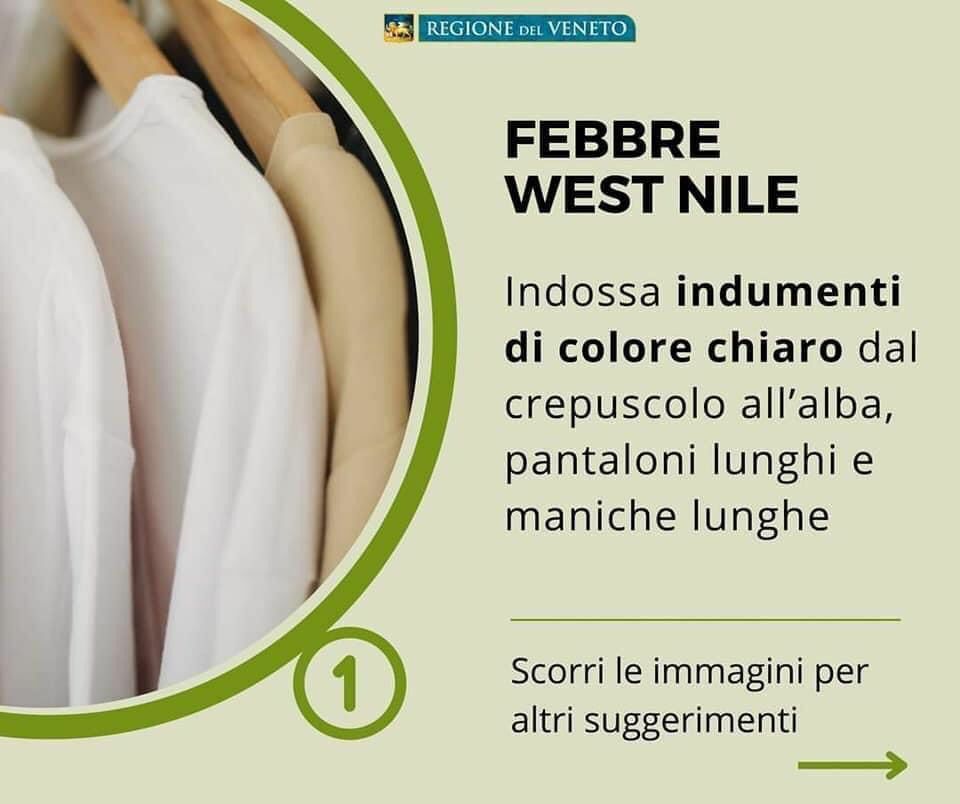 VENICE – West Nile alarm in Veneto, the Region disseminates the guidelines to avoid contagion. In a press release, the Prevention Directorate of the Veneto Region issued the recommended prophylaxis to all citizens to avoid the spread of West Nile cases, the infection transmitted by the common “Culex” mosquitoes. Infection that in some cases can cause a rather severe neuroinvasive form, especially in the elderly and frail people.

“For the West Nile virus there is no vaccine – they explain in the text – it is therefore particularly important that people know how to best defend themselves from the bites of insects that could be carriers”. For this reason, the Prevention Department of the Veneto Region has launched an information campaign, distributing a series of tables that explain how to defend oneself in all the Ullss.

West Nile, the guidelines of the Region

In the first table it is recommended to always wear light-colored clothes, with long trousers and long sleeves, from dusk to dawn.

In the second table, the Region recommends the use of topical repellents and electric insecticides. 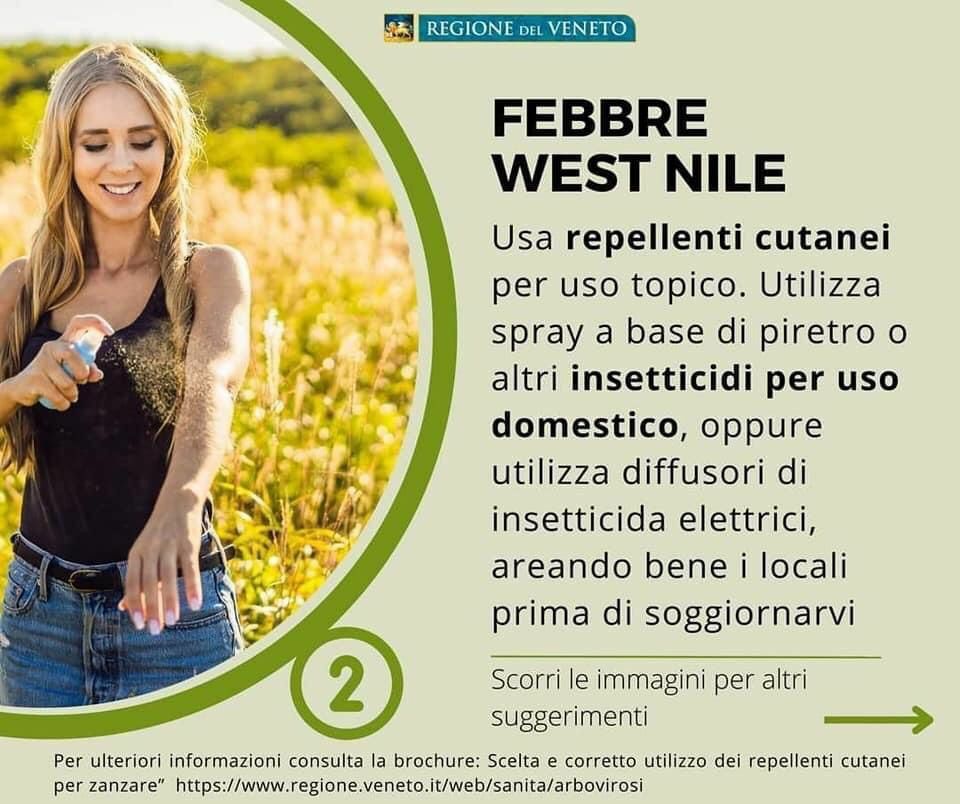 The third table recommends the use of mosquito nets on doors and windows, to be treated with repellents. 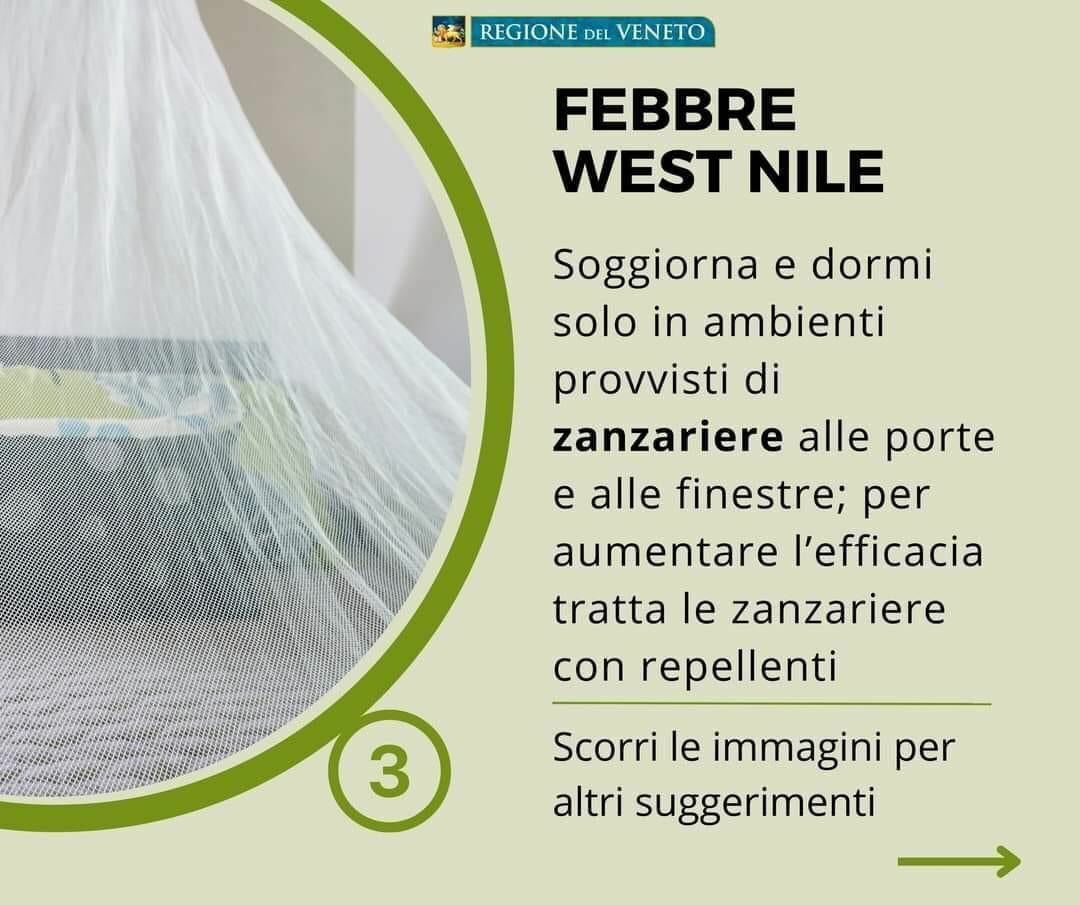 In table 4 the use of the air conditioner is recommended.

Finally it is recommended to call the doctor if the fever rises above 38.5 and they appear joint and muscle pain, headache, confusion, rash.

Anomalous August in the studies of Venetian family doctors, full despite the heat. “THE patients are very worried for West Nile, which is on the front pages of local newspapers every day. And there are still many Covid cases to follow because we have had a flood of infections: that of Padua was one of the provinces with the highest number of positives. Other than the ‘tail’ of the wave ». To make the picture at Adnkronos Salute is Domenico Crisarà, secretary for the province of Padua of the Federation of general practitioners (Fimmg), of which he is also national deputy secretary, underlining that in the region “we are certainly experiencing a difficult summer”. “Two difficult situations overlap, Covid And West Nile, and as doctors we have not had the ‘detachment’, with a reduction in patient requests, which generally occurs in August », says Crisarà. “Every day we have dozens of messages, emails, phone calls from patients asking for advice or are alarmed by suspicious symptoms,” he says.

What worries citizens most, “despite the numbers being much more limited than Covid infections, is the West Nile. The risk of aencephalitis it’s very scary – Crisarà testifies – While for Sars-CoV-2 a sort of mental barrier has been created, despite over 100 deaths per day, which makes the infection considered little more than a flu ». For West Nile, on the other hand, “despite the fact that there have been 7 deaths in Italy throughout the period, against the terrible daily Covid bulletin, the concern is high. This is also because there is a consciousness that it is not completely controllable with behaviors. While for Covid, in fact, the idea has been acquired that the mask, the distance, the isolation are needed – observes the doctor – avoiding the possibility of being bitten by the mosquito is more difficult “.

West Nile, boom in cases: here are all the symptoms and rules to avoid contagion. “Risk of the neuroinvasive form”