CREMONA – Almost 500 cases of West Nile virus infection have been ascertained since the beginning of the summer in Italy, to be precise 475 based on the latest update of the Higher Institute of Health. Although it is not an alarm, because in over 80% of cases the infection develops asymptomatically, monitoring also continues in the province of Cremona, which remains one of the Lombard centers where the greatest incidence is recorded: among the 234 people who have developed a more severe form of the disease with neuroinvasive symptoms, in fact, 23 are in Lombardy and four in Cremona.

In three cases they were people over 75 years old, in one case the age was between 64 and 75. Another 11 Lombard symptomatic cases with fever and other ailments, such as fever or muscle aches, must be added. Among the ascertained infections, there have also been 26 deaths so far: five in Piedmont, 14 in Veneto, one in Friuli-Venezia Giulia, two in Emilia-Romagna and four in Lombardy, where to lose their life at the end of August he was also a 76 year old in Marzalengo di Castelverde.

This is why even in our province, despite the arrival of the cold, the municipalities are continuing to plan disinfestations and distribute larvicidal tablets. Just in Castelverde, to counter the proliferation of mosquitoes that are vectors of the Nile virus, also on Saturday morning a hundred families went to the town hall and collected the kit made available by the administration. 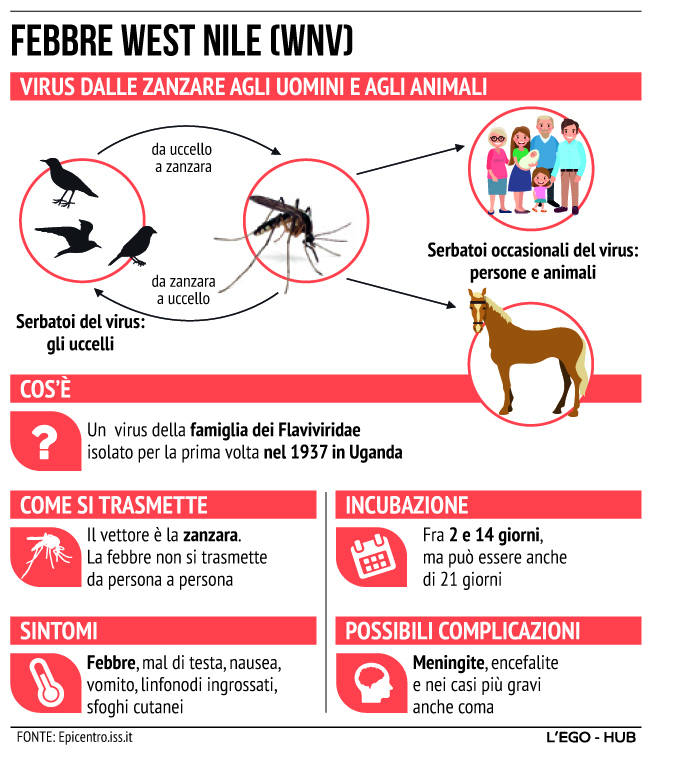 The investigations on the blood bags taken from Avis are also continuing, which they have allowed since the beginning of the emergency identify 72 asymptomatic infected persons throughout Italy, including 4 in the province of Cremona. Cesme, the National Reference Center for Exotic Animal Diseases, carries out surveillance on equines: in the Cremonese area, only one outbreak is reported for the moment, potentially affecting 38 horses, but with a single registered clinical case.

In the end, the presence of the West Nile virus was confirmed in 104 birds belonging to target species in Sardinia, Emilia-Romagna, Lombardy, Friuli-Venezia Giulia, Piedmont and Veneto. But the viral strain has not been ascertained in the province of Cremona, too if three positive samples were found in nearby Piacenza and involved as many magpies.

The Piacentino area, in particular along the Po, is among those with the largest number of positiv mosquito pools.and: 12 those that were analyzed through the trap cages and allowed to detect the presence and therefore circulation of the virus.

The ISS also carries out surveillance on the Usutu virus, an avian infection of African origin in turn transmitted by mosquitoes: it has been identified in 107 insect pools and 51 birds in Abruzzo, Emilia, Lombardy, Marche, Friuli, Umbria, Tuscany, Lazio and Veneto. Human transmission is rarely recorded, but three mostly asymptomatic cases were reported this summer.

West Nile: “positive” mosquitoes are still alert on the Po