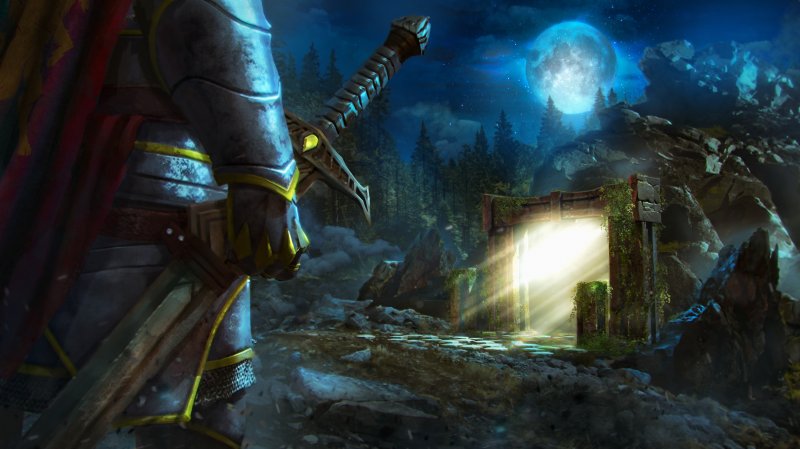 The tried of Alaloth: Champions of The Four Kingdoms, a fantasy role-playing game that looks to the past with one eye and the present with the other.

Some games keep you waiting. Maybe on the road that goes from conception to arrival on the market they find a thousand unexpected events that slow them down. But in the end, when they make it, they awaken all the curiosity they had put on you at the time of the announcement. It is with this spirit that we have tried Alaloth: Champions of The Four Kingdoms by the development studio Gamera Interactive, one of the most promising Italian projects of recent years, finally available in Early Access.

The starting point of Alaloth: Champions of The Four Kingdoms is Moonstone. Gamera Interactive has never made any secret of being inspired by the old classic for Amiga as for the game structure, which is in fact very similar. At the beginning of the adventure you can choose whether to play alone or to compete with other heroes to search for the magical artifacts needed to stop Alaloth, a demon intent on destroying the world. All this translates into more heroes running around the general map carrying out missions and collecting items, which from time to time have to challenge each other to plunder each other. Exactly what happened in Moonstone. The rest of the game works differently, in particular the action phases, but the starting point is definitely that, certainly not the classic role-playing games of Obsidian Entertainment or BioWare.

L’objective of the player is therefore to visit the numerous places on the map, some available immediately, others to be unlocked by solving missions or killing enemies, to collect resources, find travel companions and carry out other activities necessary to prepare to face the final boss.

To be honest, even the character growth it is very reminiscent of that of the old title for Amiga: much more dry and essential than that of modern role-playing games, it does not provide for real development (if not to a limited extent), but a specialization based on the choice of passive and active skills, divided into various menus. Basically you can choose what kind of character to be without class or characteristics constraints. So if you want to create a pure warrior, just choose specific skills such as powerful blows or jump attacks, while if you want to mix combat and magic you can make a mixed selection, adding various spells to the menu.

In this sense Alaloth seems really meant to be replayed several times in agility, so as to try everything, instead of facing it once, spending hours curating the individual aspects of the character. The entire design of the game seems to have been thought of with this philosophy in mind.

For example cities and villages they are not very large and can be visited in a few minutes, but for a title like Alaloth this is not a disadvantage, because it allows quick passes to go to the shopkeepers and talk to the characters to obtain or solve missions, and then return to the focus of the game , that is to go and beat up enemies. Let’s say it’s all pretty compressed, which isn’t bad given the gameplay focus. These are transitional phases that serve more to re-settle and relax, than moments that invite exploration.

Basically everything is within reach. Then you arrive in a place, check the bulletin board to see if there are new assignments, talk to the people who have an icon in their head (different depending on their function), repair the equipment, create new ones. new, the enchanting is enchanted, the accumulated money is spent, perhaps one sleeps in the local inn to recover health and off to the adventure. It should be noted that each urban area can be visited by day and by night.

Doing so is not just a habit to see the different lighting, but it allows you to access different quests and to talk to characters present only at certain times. In this sense the maps are exploited very well and they manage to offer a lot in a small space, while at the same time being varied and interesting. Refueled, you return to the main map in search of the next adventure. You can decide to follow a particular quest, or you can go blind, dealing with dangers as they come.

The most important phases of the game are the action ones, in which you face areas full of enemies. Basically theobjective is to beat everyone and collect the treasures scattered around the map, but between saying and doing there is a decidedly high difficulty involved, at least in the first hours of the game, that is, when the equipment is poor, the healing potions are few and the skill with the controller still leaves something to be desired. Consider that during the missions it is not possible to access the inventory or use the objects found around, so preparation is very important (so much so that before each dangerous area there is a rest area in which to make the final adjustments).

The combat system it’s quite classic, but with a soulslike twist that doesn’t hurt. So you have to alternate quick attacks with power attacks, while trying to dodge the blows of the enemies or parry them (in the latter case, however, if you do not have an excellent shield you risk suffering a lot of damage anyway). In reality, to master everything you need to develop the right instinct to parry or dodge at the last moment, so as to be able to take advantage of the enemy’s openings to our attacks.

Overall it works really well, even in the presence of multiple enemies, be they bandits, undead or overweight lizards shooting poisonous drool. Of course it is also important to take care of your equipment, having it repaired by some blacksmith when it is too worn or buying it again when you have accumulated enough money, so as not to end up with malus in battle.

The difficulty curve of Alaloth: Champions of The Four Kingdoms is initially very steep, to become softer after a few hours of play, when the missions that seemed practically impossible, become a walk of health and the large groups of enemies that meet in the maps they begin to no longer scare. From time to time we will also have to face gods bossnaturally more dangerous than basic enemies and equipped with much more painful and insidious techniques, but nothing insurmountable when one has mastered the art of dodging.

Talking about graphics and visual style, we loved Alaloth: Champions of The Four Kingdoms. As already mentioned, the individual maps are quite small, but the variety is very high and the places you visit all appear different from each other and very well designed, whether they are rural villages, coastal cities, impregnable strongholds or dark forests and threatening. Even the characters are well made, although framed from a certain distance (as is normal for the genre). Simply wandering around the game world is really enjoyable, especially for those who love fantasy, in particular the classic Dungeons & Dragons atmospheres, that is, which recall the genre as imagined in the 80s and 90s, net of the softenings of recent years.

In terms of overall cleanliness, Alaloth: Champions of The Four Kingdoms still features a few bug.

But that’s normal, since it’s still in early access. It must also be said that Gamera is updating it with great diligence, cleaning it from the most serious bugs that are reported by users. For the rest, the game is practically complete and can be played safely, so much so that we managed to get to the end without running into major problems, to the point of pushing us to say that it is already cleaner than many games that are published as complete and that then take months to fix.

We loved Alaloth: Champions of The Four Kingdoms and have no hesitation in recommending it, even if it is still in Early Access. The formula, while not exactly original, is very fresh, thanks to having looked at a little beaten game like Moonstone, very little imitated by other titles. New players have probably never tried anything like this, which is definitely good, especially for the curious.

Alaloth: Champions of The Four Kingdoms, the proven role of a role-playing game between modernity and the past