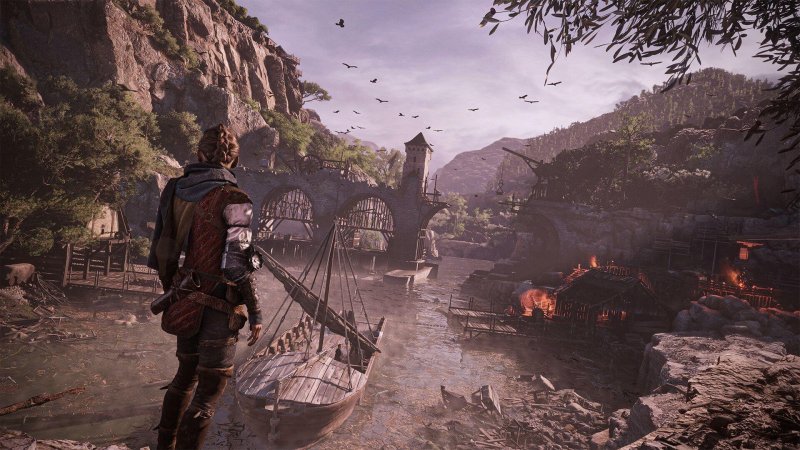 We had another chance to preview A Plague Tale: Requiem, this time in two rather advanced chapters of the adventure.

Although there is no shortage of valuable products on the home straight before the end of 2022, A Plague Tale: Requiem has managed to rightfully earn a place among the most anticipated of all. On the other hand, in recent years the Asobo Studio they have demonstrated their talent without a shadow of a doubt and many fans of the French house are convinced that Requiem can represent that leap in quality capable of projecting it into the Olympus of the best teams in circulation.

Our first test of A Plague Tale: Requiem made us, in all sincerity, embrace this hypothesis: although the chapter we tested was rather basic in terms of gameplay, it was in fact managed to leave us speechless with a quality technical sector frightening, the graphic realism of the maps, the excellent acting and the general solidity of the experience (however not without strong moments, nor significant challenges). Now, however, the release date is approaching and with it came the opportunity to face a much more in-depth test. The impact of this new tried? Always remarkable, but this time some unexpected cracks appeared in Asobo’s beautiful work, which gave shape to doubts to be addressed promptly in the review.

Let’s find out which ones in ours tried of A Plague Tale: Requiem.

The Pied Piper is a beginner

The chapters at our disposal were the sixth and seventh and, considering that it is in all likelihood of central parts of the main campaign, we will try to stay vague in terms of plot to avoid spoilers. The only thing to know is that, in the first of the two sections we tried, Amicia and Hugo are still on the run and the young woman is not exactly in great shape: wounded and in pain, she finds herself having to look after her little brother in an area. this time not infested by rats, but by a group of guards with orders to eliminate it on sight.

So far nothing particularly strange or striking, given that during the first phase of this level we used game mechanics mostly already offered by the predecessor, yet some news was seen anyway. Amicia is much more lethal and aggressive in A Plague Tale: Requiem and can easily take out the guards with a well-placed crossbow bolt or a stab in the back; however (understandably) the game does not offer many offensive tools during progression and does not even allow you to accumulate them given the limits of the inventory (expandable only at certain workbenches, provided you have the necessary materials to do so). Most of the time, therefore, there is a tendency to avoid enemies by moving stealthily and attracting their attention with more readily available tools, such as stones.

Amicia, as an alchemist, obviously has many more gadget with which to get rid of those who are looking for it: bullets and incendiary vessels, smoke bombs capable of extinguishing fires and obscuring light sources and even a slime that blocks movement for a limited period of time. The usefulness of such objects, however, is usually directly proportional to the quantity of rats in a level and their absence during the entire first half of the chapter forced us to use a much more oriented strategy. stealthto avoid perishing.

At a certain point, however, the map changed and we found ourselves – after a series of events that we will not detail – not only having to deal with the usual sea of ​​rats, but also being able to take advantage of Hugo’s “illness” to use them in our favor. The kid in this chapter actually gets the ability to control small hordes of rodents for a limited time, a power that also allows him to kill enemy guards in series. Not only that, through the ability of the animals to perceive the blood of the prey, Hugo can also use a sort of “instinct mode“, which shows the movements of the guards through the walls.

Commonly a skill like this is all too abusable in stealth games, yet A Plague Tale: Requiem, significantly increasing the number of guards and initially limiting the protagonists’ ability to eliminate them, he introduces it with great cunning, so much so as not to make it perceive as an exaggeratedly useful ability. Obviously, it will remain to be seen if this management will continue even in the advanced levels, which seemed to us full of enemies, but also of options to get rid of them.

Instead, the management of the “possession of rats” is more prudent: Hugo cannot use the power too long or you risk losing control; moreover the mice are positioned in such a way that they are not always approachable with ease, the boy can only move them if he is a short distance from them. The difficulty, therefore, consists in reaching such places which, being well defined, do not allow to abuse this power. However, it will be interesting to see how the talents of Amicia’s little brother will be exploited in the more advanced stages of the adventure.

In the phases described above, the game has always seemed to us very solid and well thought out: the level design takes into account the imbalances, as mentioned, and the introduced powers add variety to a non-trivial system. Towards the end of chapter six and then in the next one, however, we faced a couple of phases that made us turn up our noses, showing that the Asobo still have some steps forward to do in terms of approach to the game design.

We found the first shaky moment at the appearance of some sort of boss at the end of the chapter: a large armored guard from theextremely limited artificial intelligence (practically impossible to get hit if you constantly move around the arena where you face it), which became vulnerable only when stunned with fire and hit in a specific weak point behind. It is a clumsy battle, where the immersion breaks completely if you run out of resources (these are regenerated in the chests if you waste them), and the poor mobility of our opponent has practically canceled any tension, even leading us to wander around like idiots for a few minutes in hopes of seeing any change in behavior.

These AI problems were even aggravated when in the next chapter we had a beefy helper, capable of eliminating the opposing guards once thrown against them. After all, our bodyguard turned out to be completely invincible in a direct one-on-one battle and can only be eliminated if surrounded by enemies; so we used a very simple and ridiculous trick to make sure we wreak havoc for the whole map without any problems: after throwing it at a troop, we prevented any nearby opponent from attacking it using the stunning counterattacks available to Amicia; normally it is not possible to use them in bursts, but if the attention of the enemies is focused on someone else they do not react to the stuns and can be constantly stupefied while our protector turns them into skewers.

As you can well understand from what has been described, the game’s artificial intelligence has clear shortcomings and not only these missteps cancel the challenge, but they spoil the overall immersion. A real shame in a game that graphically left us astonished, capable of making most of the most powerful triple A productions in circulation pale with its settings, its impeccable art direction and general detail. If nothing else, outside of the “combat” phases, the level seemed once again well thought out and further enriched by a new object deriving from a crystal, capable of attracting rats temporarily and offering new environmental puzzles. It would not surprise us, however, if it were not the last gem available to Amicia, during her epic in the company of her brother.

Graphically exceptional, atmospheric, and very well thought-out when sticking to the canons put in place by its predecessor, A Plague Tale Requiem once again managed to impress us positively, at least until new mechanics took over the system that showcased some obvious shortcomings of artificial intelligence. It is not enough to make us fail a solid and splendid experience to see in motion, of course, but it ruins the dive and cancels the level of challenge of certain phases. We therefore hope that the Asobo find a solution (or put in place some limitations) before launch.

At Plague Tale: Requiem, we again tried the highly anticipated title of Asobo


You can find our social media profiles as well as other related pageshttps://prress.com/related-pages/