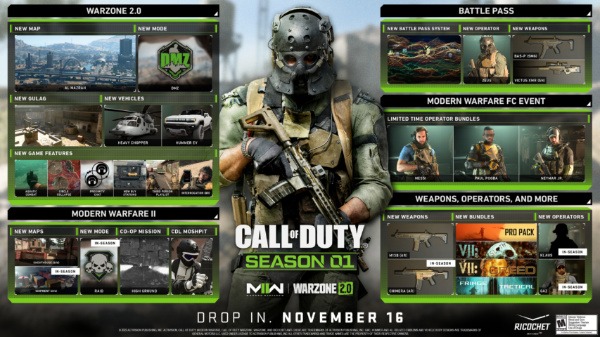 From a few hours it is possible to pre-load Warzone 2.0 on all compatible platforms. From tomorrow the battle royale experience of call of Duty will be available free of charge, alongside the most recent Modern Warfare II and introducing a brand new game mode known as DMZ.

For the occasion Activision has released a spectacular launch trailer for the new Warzone. The US publisher has also revealed all the details relating to the Season 1 from Call of Duty: MW2 and the most important information about DMZ. Here you are what to know.

Warzone moves to version 2.0: what to expect

From 19 (Italian time) tomorrow, Wednesday November 16thCall of Duty: Modern Warfare 2 players will have access to all content in the Season 1.

Warzone 2.0 will also be available, the renewed multiplayer experience that will include DMZ and many other innovations prepared by Infinity Ward. Let’s focus momentarily on the new battle royale from Activision, which brings with it a new setting, lots of gameplay innovations and third-person playlists already presented in MW2.

The first ‘arena’ of Warzone 2.0 responds to the name of Al Mazrah, setting that will integrate different scenarios taken from MW2 multiplayer maps, such as Embassy, ​​Sarrif Bay, Sa’id. Players will be able to customize your equipment or earn one by fighting on the battlefield, thanks to new public events. Do not miss the Shop, where it will be possible to spend the money collected in-game to buy the main weapons of the equipment created.

Warzone 2.0 inherits most of the mechanics seen in the first version of the battle royale. One of the most appreciated features the gulagwhich in this new iteration undergoes some changes: the arena will welcome 2v2 fights in which pairs of players – randomly matched – will have to coordinate to eliminate the opposing team. Prisoners will be supervised by jailer, that “will appear during the game to make the fight even more frenetic”.

The warder will not be the only soldier controlled by artificial intelligence. During Warzone 2.0 matches you will run into other enemy NPCspresent only in the gulag, in the strongholds and in secret sites. All of these locations are clearly marked on the tactical map in order to give players the freedom to deal with these opponents or avoid confrontation.

Among the other great news of Warzone 2.0 we find a wide range of new military vehicles, among which we find agile ATVs, off-road vehicles, light and heavy helicopters and a couple of boats. In fact, we recall that in MW2 i have been introduced water fightswhich will allow operators to cross the watercourses present in the setting and, in the most agitated situations, face battles underwater – where it will be possible to use only secondary weapons.

As regards the third person playliststhese will become part of the weekly rotation of the battle royale experience during Season 1 of MW2.

The subject of numerous rumors that anticipated the debut of Call of Duty: Modern Warfare 2, DMZ is the name of a new open world multiplayer mode. In this game mode “two teams of operators they will have the maximum freedom to complete faction missionsTo dedicate to secondary goalsface up to enemy operators or AI soldiers and hunt for valuables while trying to survive until they are mined”the developers explain. 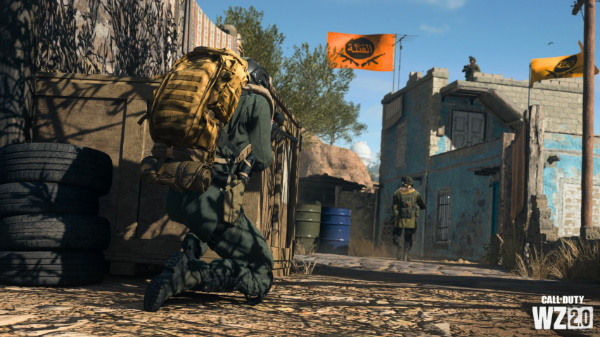 With the debut of Warzone 2.0, the first version of the battle royale will not be ‘trashed’ by Activision, however it will be temporarily put on standby before returning with a new name: Warzone Caldera. It will be a completely separate free-to-play game from Modern Warfare 2 and Warzone 2.0. This new version will offer a single standard playlist that will allow users to play on the Caldera map – Rebirth Island and Fortune’s Keep will not be available at launch.

Spending a few words for Season 1 of Call of Duty: MW2, this will see the return of two maps much loved by the community and particularly adored by fans of close quarters battles. I’m Shoot House And Shipment, both revised to accommodate various aesthetic novelties.

The new’ Shoot House “designed to train cartel mercenaries at a level comparable to Mexican special forces operators”; will be available from tomorrow and will re-propose its three-lane structure. Shipmentarriving mid season, instead set “on a cargo ship hit by a storm in the Atlantic Ocean”; the developers they suggest that the map borders have been removed to allow for water combat.

Without too many surprises, with Season 1 also comes a brand new Battle Pass, with a series of free and premium content distributed in ‘sectors’: players will have the freedom to choose their favorite sectors to start unlocking certain items. The pass will include four weapons And you are operators which will expand the game roster. The system of Prestige seasonal will allow hardcore players to get a Prestige rank after passing level 55 – they can be unlocked up to five Prestige rankswith the fifth obtainable after level 250.

Warzone 2.0, DMZ and the Season 1 of Call of Duty: MW2 will arrive tomorrow.

Call of Duty Warzone 2.0 arrives tomorrow: launch trailer, all the details on the DMZ and Season 1