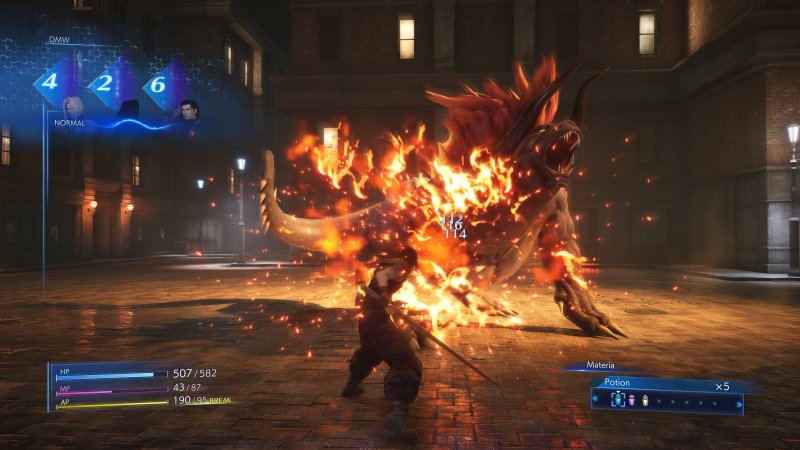 We tried Crisis Core – Final Fantasy 7- Reunion, one of the most popular pieces of the so-called “compilation” of Final Fantasy VII.

You know, the Final Fantasy VII compilation contains titles (and a feature film) discussed to say the least, but, however divisive her contribution to the narrative of the legendary JRPG of Kitase and company may be, almost everyone seems to agree on at least one aspect that concerns her: her piece most successful is Crisis Core. This PSP game with the good Tabata at the reins – he hadn’t escaped from Square Enix at the time and certainly had a few less stress wrinkles on his face – is after all a respectable JRPG action, with more than one interesting and focused mechanic. one of the fanbase’s most loved characters; all qualities that have allowed many, at least in part, to pass over such a fluctuating narrative that it makes a rollercoaster ride seem like a peaceful walk on the plains.

Whatever your opinion on this prologue of sorts, which tells the adventures of Zack Fair before the events of the main game, it is therefore undeniably a rather clever move on the part of Square Enix to propose it in a renewed guise to the public. Especially with the subsequent pieces of Final Fantasy VII Remake still in development.

On the occasion of a very well organized London event, therefore, we have tried Crisis Core – Final Fantasy 7- Reunion and today we will analyze in your company the improvements and modernizations of this peculiar remaster.

Gameplay: Bewitched by the remake

Let’s start with the most important thing: simply defining this Reunion remaster is quite an understatement. The game is in effect a remake partial, which boasts significant mechanical changes despite the underlying structure and narrative seem absolutely unchanged from the original title. To be exact, we were able to play the first chapter of the campaign and more precisely a mission in Wutai where we had the opportunity to test the renewed for a few minutes combat system and take on a couple of bosses.

Let’s start right from battles, because the woodiness of the original title seems to have completely disappeared, in favor of fights markedly closer to what was seen in Final Fantasy VII Remake. Zack here can, in fact, perform melee combos and dodges much smoother and faster than in the past, a feature that makes everything much more dynamic. Obviously, theartificial intelligence it was made more aggressive to counterbalance these changes, and since it was already attacking fairly frequently even in the original Crisis Core, it became necessary to move smarter. If that wasn’t enough, there is also the possibility of using the powers of the matter (obviously equipped in the usual menu) with the comfortable pressure of a back button, and to fill MP, life points or AP with the objects possessed at any time thanks to completely renewed overlay menus.

All in all? These are all much-appreciated changes that make Crisis Core look like a JRPG crafted the day before yesterday. Only one thing left us a bit strange: the desire to keep the slot system almost unchanged, called Digital Mind Wave. Even here, in fact, you can get powerful passive bonuses or devastating finishing moves (the classic Limit Break) in a completely random way, due to a series of numbers and portraits that scroll like slot machines at the top of the screen while you they kill enemies; it is a somewhat caciarona mechanic, which broke the rhythm a lot even in the original and could in our opinion be revised in order to require more tactics and intelligence. If nothing else, cutscenes introducing Limit Breaks and animations of the moves themselves can get quickly cut, and the DMW itself doesn’t spoil the overall experience that much, especially in this perfected version.

Square Enix also seems to have made an effort to make the boss more interesting: now these have devastating charged moves that force the player on the offensive (preferably by exploiting their elemental weaknesses) to avoid terrifying broadsides or even stun them, and the attack patterns seemed slightly more dangerous, albeit not particularly varied (the battle against Ifrit was very similar to the original one, so it is plausible that some bosses have been modified only marginally).

Technical sector: redone but not too much

In reality, the choice to only partially update the game also concerns the technical sectorgiven that the graphics have undoubtedly improved, but we are not faced with a complete makeover of the assets (even predictably, given the costs and time that such work would require).

Overall, Crisis Core – Final Fantasy VII- Reunion boasts high resolution textures, applied to the original game models, which have only been partially retouched, with the only serious polygonal updates on the main characters – Zack himself, Angeal, and Genesis, with some models taken from the Remake and re-inserted here – with a level of detail comparable, albeit slightly lower in our opinion, to that seen in Final Fantasy VII Remake.

We are therefore not faced with a botched or careless operation and the age of the game is mostly noticeable in the interlude scenes, where the renewed models clash a bit with the lack of expressiveness of the protagonists. If nothing else, considering that Gackt’s primary antagonist is an expressionless tuna for much of the campaign, his appearances are no more alienating than they were in the past. Too bad for the extremely compressed and low-resolution CG movies; they are quite out of tune with the rest of the action when they appear.

The final touches are obviously related to theinterface – completely redone and, it must be said, completely recycled from the Remake – given that what was played did not have the slightest change in content from the PSP version. Square would have already confirmed several times the desire not to make additions of any kind to the story of Zack, yet below we expect some connection with the new course of Final Fantasy VII. Who knows, maybe after the final credits.

We believe it is reductive to define Crisis Core remaster – Final Fantasy VII- Reunion, given that the work done on the technical sector is significant (albeit only partial) and the title has been seriously modernized in the mechanics. For heaven’s sake, some wrinkles and age-related limitations are still noticeable and the narrative has remained the same, but overall we believe that even today the adventures of Zack are more than enjoyable and represent a piece of Final Fantasy VII worth playing. Now all that remains is to wait for the complete code, for the inevitable review.