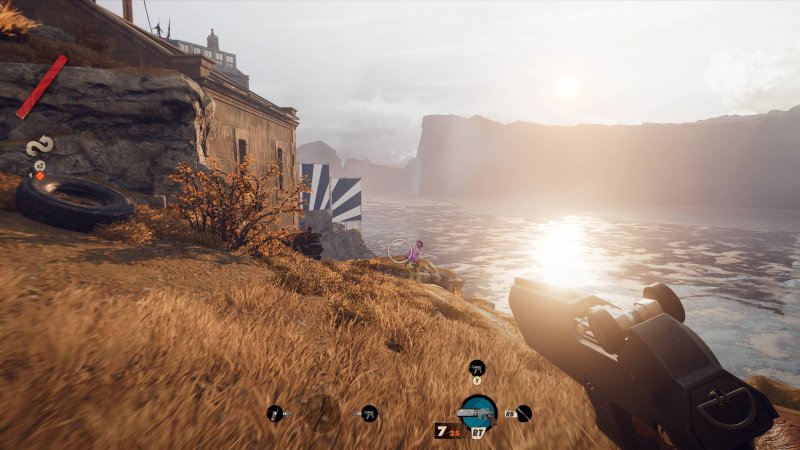 Let’s face it: it was bizarre to see Arkane’s latest shooter available as a console exclusive on PS5 for a year, despite Microsoft’s acquisition of Bethesda being officially announced just days after the game’s release.

The agreements are agreements and the Redmond house has always said that it would honor them, so Xbox users had to arm themselves with patience and had to wait twelve long months before being able to see the title directed by Dinga Bakaba and Sebastien Mitton land in the catalog. by Xbox Game Pass.

Well, now we are. Colt and Julianna are in great shape and the loop that traps the island of Blackreef is there, ready to be broken by someone skilled, brave and cunning enough to succeed: here is ours. Deathloop review for Xbox Series X | S.

History: I start all over again

We were saying, in fact: the mysterious island of Blackreef is the background to the history of Deathloop, which takes place systematically over a period of twenty-four hours: the loop lasts so long that for some reason it traps the scenario, making sure the same day repeats itself over and over and over. Colt, the character we control, has every air of being a fighter and wants to end this curse, but apparently his attempts so far have been countless and none of them have been successful.

At the beginning of the game we wake up on a beach, without equipment but with the memory of what we have done in the previous loops, at least the last ones. As soon as we get hold of a radio, here’s the voice of Juliannaa woman as good as and more than us at killing others, who for some reason is trying in every way to sabotage our mission, for example by suddenly appearing and killing us in the most disparate ways.

The exchanges between Colt and Julianna (excellently rendered in dubbing in Italian thanks to the voices of Francesco “Deacon” Rizzi and Alice Bertocchi) undoubtedly represent the main strength of a brilliant and original storytellingwhich feeds the story with new elements with every attempt to break the loop and lets us slowly discover the truth about Blackreef, its strange inhabitants and the small group of Visionaries that we will have to kill to complete the mission.

To further enrich the narrative sector there are a myriad of documents and notes that we will be able to collect during the campaign and that will provide us with even more ideas, demonstrating how careful, scrupulous and detailed the writing work carried out by Pawel has been Kroenke and Sandra Duval, which we praised already in the review of Deathloop for PS5.

If it is true that the story of the Arkane title is enriched with new elements, which like pieces of a puzzle go to make up the general picture, revealing the truth about where we are and the characters we are dealing with, Colt included, the same can be said of gameplay which, in a decidedly innovative way, is introduced gradually, taking us by the hand and accompanying us on a path that will at first see us uncertain and disoriented, just like the protagonist, and finally aware and determined.

There is obviously a lot of Dishonored and Prey in Deathloop: both the combat system as much as the management of the phases stealth are practically a trademark of Arkane, a style that the studio (in this case the division of Lyon) has been able to make clear since the beginning and which is very well recognizable, mixing with technical aspects such as graphics and sound in order to produce an experience that oozes personality from every pore. Not a simple result, in a market that is increasingly homologated and lacking in ideas.

Equipped with a first-person view, the inevitable dagger to be recalled when necessary for silent eliminations or in rapid and violent hand-to-hand clashes, a set of special powers such as translation that recall in an all too conspicuous way the previous projects of the team and an arsenal perhaps not particularly original, but well characterized (which is certainly something that counts more than just the numbers), our goal will therefore be to break the loop before the loop ends.

In practice, this means visiting four different and broad scenariosduring as many moments of the day, facing the bizarre inhabitants of Blackreef who patrol the streets and want us dead, in an attempt to eliminate the eight Visionaries who somehow control the technology that keeps the island trapped in this absurd limbo and acquiring man hand their abilities to become even stronger … in the hope that Julianna doesn’t suddenly appear to put a spoke in the wheel.

The funny thing is that the girl role gave the developers a nice idea: to base the multiplayer competitive, making sure that someone (chosen from artificial intelligence, one of our friends or a complete stranger) can take on his shoes and carry out a real invasion of our game, defending the loop and trying to kill us. A brilliant idea for an element that nevertheless remains accessory.

Returning to the gameplay, it must be said that at the behavioral level the enemies come down to the inevitable compromises of the stealth genre, therefore they are not very smart and often tend to throw their heads down in the false belief that they are immune to our bullets, but a certain degree of resistance and the hateful ability to inflict massive damage balance the situation, preventing us together with a prudent management of ammunition (read: often ne you will be short) to clean up the streets of Blackreef like any DOOM Slayer, indeed often pushing us to prefer a silent approach also to take advantage of the articulated level design that characterizes the maps, full of more or less secret alternative passages.

The fearful caution that will accompany us during the first hours of the Deathloop campaign is closely linked to the original structure of the game, which provides a decidedly different interpretation of the mechanics roguelike. Roguelite, indeed, since at the end of each loop we will be able to use the “residue” obtained up to that moment to infuse certain weapons and objects (or sacrifice them, if we consider them not very useful) in order to keep them for the next attempt.

An approach that at first makes us a little uncomfortable, losing in some ways the character of progressiveness that characterizes all the other aspects of the experience and putting us out of the blue grappling with the interface that can be consulted between one expedition and another. , which does not miss details, background, clues and then again perks, upgrades, different classifications for Colt’s equipment, along with a function to quickly switch from one phase to another of the day: one of the many mechanisms designed by the authors to allow us to explore the areas at different times and thus discover further secrets that can extend the duration experience well beyond the sixteen, eighteen hours required to complete the campaign.

Technical realization: between style and frames

We talked previously about the “Arkane style”, which as mentioned we find overbearing in Deathloop also and above all as regards the technical sector. Although in fact the design of Colt and Julianna differs in many ways from the geometries of Dishonored to approach the works of MachineGames, the inhabitants of Blackreef, with their disturbing masks, clearly recall that type of aesthetic, which also owes a lot to the classic BioShock.

Unfortunately the implementation of the ray tracing only concerns shadows and ambient occlusion, which means you can do without it without missing it. However, it is better to opt for the “performance” mode, since using “visual quality” the frames per second reach sixty only in confined spaces, systematically dropping in the open areas of the maps and returning an inconsistent experience, also for the purposes of the precision of the controls. .

Finally, as usual, theaudio, which, however, also deserves a better positioning from the perspective of this review. In addition to the aforementioned excellent dubbing in Italian and solid effects, Deathloop can in fact count on one absolutely amazing soundtrackrich in contaminations and daughter of the ’70s, perfectly capable of accompanying and enhancing the various game sequences.


Deathloop confirms all its extraordinary qualities also on Xbox Series X | S, involving us in an original and exciting adventure, told in a brilliant way and staged in the same way, gradually introducing the mechanics of a gameplay full of personality and characterized by one style that is now a trademark for Arkane productions. A very valuable addition to the Xbox Game Pass catalog, as well as a game full of surprises, except perhaps one: the Xbox Series X version is just as we expected and behaves virtually identical to PS5 in its various modes. graphics.

Deathloop, the review for the Xbox Series X of the Arkane shooter