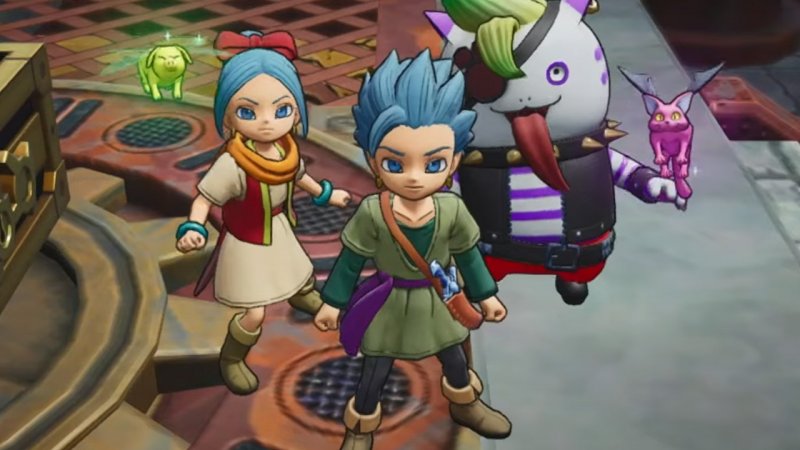 Square Enix takes us back to the world of Dragon Quest XI with Dragon Quest Treasures, a monster and treasure spin-off for PC and console!

The Dragon Quest series has a truly unmistakable feature: its monsters. The protagonists of the series may even remain unimpressed, but the creatures of Akira Toriyama – who draws the (Square) Enix series from, like, all of life – they’re too, too characteristic. Who does not know the iconic Slime, the Kougar or the pot-bellied dragons that more than arouse fear make you laugh?

In some ways, the monsters of Dragon Quest are more famous than its own protagonists, and it’s no surprise that, years ago, entire spin-offs were centered around them. While fans of the series have long been waiting for a new Dragon Quest Monsters: Joker, Square Enix has pulled a curveball, as you will discover in our Dragon Quest Treasures speciala game that, however, seems to have some arrows in its bow.

Erik and Mia on an adventure

We already know what the question is whirling in your head. We can almost see you typing it in the comments section below, and it sounds something like this: “Do I have to play Dragon Quest XI to understand the story?”. The answer is no, because if it is true that the protagonists of Dragon Quest Treasures are Erik and Miaand Erik was basically the protagonist’s right-hand man in the original JRPG, this story takes place when the two were children, long before the fateful events then narrated in Dragon Quest XI: Echoes of a lost erawhen Erik is already an adult.

Their characters, however, seem the same, but they know very little about the story, except that at the beginning of the game Erik and Mia live in a Viking ship and dream of exploring the world, when they meet Porcus and Purrsulatwo strange creatures who lead them to a crypt where our people exhume the Dragon Daggers and, due to a series of circumstances, end up in the floating world of Draconia.

Draconia is an archipelago made up of several islands suspended in the sky, all characterized by very different biomes and environments. To get home, Erik and Mia will have to find the seven Sfe– err, Stones of the Dragon, only they are not the only ones looking for them: they will have to contend with pirates and privateers who want to seize them for their shady purposes. It will therefore be a race against time, but Erik and Mia will also have the opportunity to become very rich as Draconia hides many other treasures.

We still don’t know how structured the narrative of Dragon Quest Treasures is, an RPG that seems to be mainly focused on gameplay, but which at the same time seems to have a rather eccentric cast visually, especially as regards the antagonists, which include a skeletal pirate and his crew. Expect a bizarre story, adventurous and full of irony, as per tradition.

The backbone of the gameplay will all revolve around the search for the treasures that Erik and Mia will have to unearth and bring back to the base, where they will be evaluated and exhibited: this part of the game is practically a triumph of fanservice, because Square Enix has already anticipated that Erik and his sister will find replicas of weapons, armor and artifacts belonging to almost all the Dragon Quests in the series. What are the Gs earned by these treasures for … well, we still don’t know.

It is possible that they will spend on upgrading Erik and Mia’s weapons and equipment, although in reality the player can only control one character and swap them at any time. Or they could be related to the progression in history; for example, you will have to accumulate a certain amount of G to start a new chapter, but we are in the field of conjecture.

But we know how to find the treasures. Apparently, Erik and Mia will have an artifact called Fortune Finder which will manifest itself in the form of an arrow at their feet. It will be a bit like playing “water, fire, fire” because in the vicinity of a hidden treasure our monsters will start to fidget and, at that point, we can use the so-called Treasure Vision to take a “picture” of the point of view of our monsters, which will summarily indicate the position of the treasure. Finally we will only have to recognize the place and look for the glow that represents the buried treasure.

It will not end there, however, because the rival gangs will try to steal it from us with real ambushes on the road to return to base. And it will be in these moments that we will have to really get busy in combat, even if Erik and Mia will only have a marginal role.

The Dragon Daggers, in fact, allow our little heroes to communicate with monsters and recruit them. They will then be able to field up to three, who will follow them around Draconia: it is not clear if the world is an open world or a set of macro-areas divided by uploads, but apparently each explorable area will be extremely vast and will develop both horizontally and vertically. In fact, some monsters will give us additional movement abilities: we can hang on to Vampistrelli to flit around, or use the slimes to bounce off elevated platforms. The metroidvania-like dynamics should add some spice to the exploration, although it’s not very clear how you can actually recruit monsters and add them to your team.

Furthermore, it is still a mystery combat system, which will not be turn-based like in Dragon Quest XI, but in real time. In this case, our monsters will autonomously attack the enemies that will attack Erik or Mia, who will only be able to escape or hit the distracted opponents with their daggers and some special blows, which probably draws on the indicator under their portrait. This is also an aspect of the game that Square Enix will have to clarify in the coming weeks: there are still several months left until the release of Dragon Quest Treasures, but what we have seen certainly deserves an in-depth study.

Dragon Quest Treasures is no ordinary turn-based RPG like Dragon Quest XI, but a hybrid title that mixes adventure, real-time combat, and a distinctive collectible dynamic that feels almost like a giant minigame. There are still many aspects to be clarified, starting with the combat system, but it is difficult to predict if the new spin-off will have the same success as Dragon Quest Builders or if it will remain a nice parenthesis for fans of the series.

Dragon Quest Treasures, the preview of a spin-off focused on monsters and treasures