a question that many of you ask us and today we want to try to give an answer: ‘What is the difference between Android TV and Google TV?‘

Recently, in fact, a dichotomy has arisen on the television market, on the one hand televisions that declare on board the presence of Android TV and on the other hand those who point instead to Google TV.

As many of you know, Android is the operating system created by Googleinitially for smartphones, but which then expanded to other sectors and for the world of televisions it was declined in the version Android TVoptimized for remote control interaction and suitable for large screens used from a distance.

Realm TVTV currently on the market with Android TV

As with smartphones, different versions of the Android operating system are circulating and on the market we can find televisions with more or less recent versions. The Google TV interface available on TVs running Android TV 10 and later. At the time of writing, Android TV 11 is the most recent commercially available version, while Android TV 12 has just been released in final version to developers. Google engineers are already working on Android TV 13, currently in beta.

Google TV vs. Android TV: what are the differences?

The renewed interface Google TV has opted for a radical change from that of Android TV, with a clear change of the Home screenthe home screen that greets consumers when they turn on the TV. 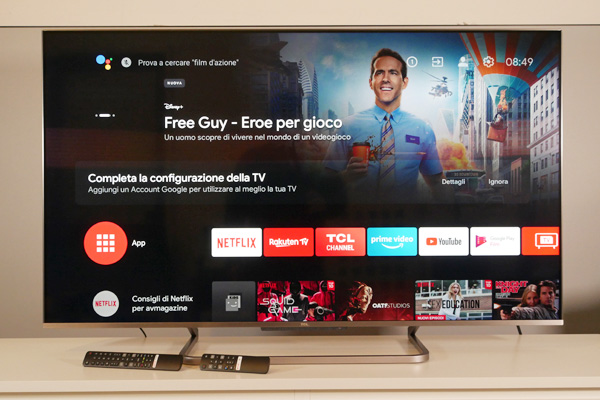 Android TV based on a banded interface and based on a approach to app. At the top is the search box, then the strip of installed apps, positioned in order of use, below we find the previews of the programs of the various services installed. The interface has become more graphically appealing in the latest versions of Android TV, but the basic layout has remained the same.

Google TV, on the other hand, aims for a more unified experiencewith a correlation engine that leverages artificial intelligence made in Google for highlighting the contents can be more interesting for the user by drawing from the various services streaming services such as Netflix, Prime Video, Disney+, Apple TV and of course YouTube. To decide what to watch, it is no longer necessary to sift through the different platforms, but the contents most in line with the user’s interests are displayed in a unified way. Each user will then have his own personalized interfacealso in this case to offer a more fluid and immediate access experience to your favorite content.

Furthermore, the TV lives more inside theGoogle ecosystem, whereby user profiling on the TV also benefits from data from other Google services. You can also see something interesting on your phone in the morning on your way to work and easily add it to your Watchlist, finding it prominently when you turn on the TV.

The Google services dedicated to parental control are also more integrated into the television, with the possibility of managing the children profileby selecting which apps can or cannot be installed, to control the activity within them, all directly from the parents’ phone, with the possibility also of setting time or time limits for the use of the TV via the Google TV app.

TVs equipped with the Google TV interface also benefit from greater unification even within the main menu. If with Android TV we generally find two distinct menus, the one for managing the audio/video features of the TV on the one hand and the one for managing the features of the operating system (very similar to the one found on smartphones and tablets), now the menu Settings sees a unified approach and interface.

Even the entries that would be in the android menu they are therefore more easily manageable from the remote control and reachable without having to enter a submenu with a clear smartphone heritage, as happens in Android TV.

Why is there no Google TV on all TVs with Android TV?

The legitimate question and the fairly simple answer: as happens with ‘stock’ Android which runs on practically all phones, especially in the older versions, the more complex interfaces often require the latest version of the operating system and above all require hardware capable to keep up. More powerful processors and more RAM and storage in the first place. A producer like TCL has decided to switch its C rangethe one born under the motto ‘Value for money‘ and unites good features at attractive prices, to Google TV, demonstrating a willingness to invest heavily in this family. We then find many other televisions on the market which, in order to keep the price lower, focus on hardware with lower specifications and consequently continue to offer Android TV with its standard interface.

Some concepts are difficult to explain in a purely textual way, we took advantage of the presence in the editorial office of a television equipped with Google TV, the interesting TCL C635 in 55-inch formatto also visually explain the differences and potential of Google TV in the video that you find at the top of this page, or at this address on YouTube.

Google TV vs. Android TV: let’s discover the differences together