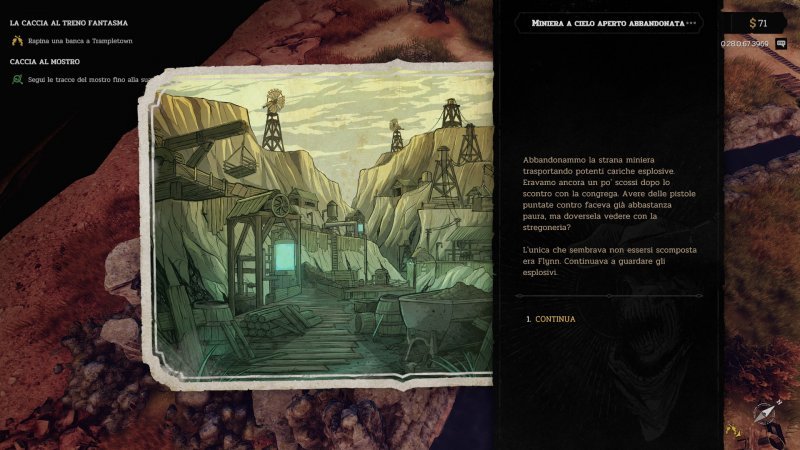 Seven outlaws and a powerful demon are the protagonists of the new Ice Code Games strategy: we tell you about their adventures in the review of Hard West 2.

What happens when you put together a classic western scenario and a horror story, sealing this union using a ruthlessly hardcore strategic approach as the glue? It happens that bullets, spells, blood and curses fly, while a band of outlaws tries to recover from a mysterious demon something far more precious than money: their own soul.

Developed by Ice Code Gamesa Polish team that received this assignment directly from the authors of the first chapter, Hard West 2 is this and much more: an adventure full of references to the world of game books, with crossroads and decisions capable of changing the balance on the field of battle, but also a truly challenging experience with a few edges too many, able to test even the most savvy players.

The time has therefore come to load the guns, distribute bandages, organize the arsenal and carefully select the fighters we are going to deploy, because the slightest error of assessment could cost us really dearly: here is the Hard West 2 review.

History: between trains and demons

Gin Carter and his band of outlaws couldn’t miss the chance to storm the legendary Ghost Train, imagining who knows what riches were hidden inside those wagons. What they find once they get on the convoy, however, is quite different: monstrous and gigantic legs appear on the sides of the carriages, as if the vehicle were actually a huge beast, while the driver reveals that he is a demon called Mammon.

In an attempt to get out of the impasse, Gin makes the mistake of challenging his infernal opponent to a hand of poker, but he inevitably loses: he doesn’t get the hell out of him, after all. At stake were the soul of him and that of his companions, who are thrown off the train and disperse inside thewestern setting which is the backdrop to the Hard West 2 campaign.

Gin, her friend Flynn and the Native American warrior Laughing Deer are still alive, but their companion Colt is missing: to find him they must recover the soul they have lost and halt the advance of the Ghost Train, the outlaws decide to join forces with the mysterious undead Old Man Bill, the huntress Cla’Lish and the Reverend Lazarus, forming a formidable new team.

By freely exploring the different maps that characterize the three chapters of the campaign, we will have the opportunity to try our hand at a series of complicated missions and interact with other characters to unlock secondary tasks, use the money earned to buy new weapons and equipment, assign the poker cards that unlock upgrades, but also to make decisions and face dialogues that will strengthen relations with our teammates, improving performance in battle.

The narrative component that develops during the exploratory phases of the map, through a large amount of texts on the screen (fortunately translated into Italian), the interactions with the NPCs, the inevitable visits to the doctors to restore the health of the team after each mission and in general the adventurous elements pose themselves as something new for the genre, but they often appear simplistic and you will soon take advantage of the possibility of speeding up the scrolling up to four times.

Fortunately the gameplay real and concrete of Hard West 2 is quite another thing and takes shape within challenging turn-based battles in which from time to time four of our characters will face bands of wanted, but also law enforcement and obviously demonic hordes more and more numerous and insidious, made up of multiple units that are distinguished by skills and powers: on the front of the variety of enemies a more than discreet job has been done.

During each shift we will be able to spend three coins that act as indicators for our ability to move (through the classic division of the map boxes) or to attack, depending on the distance traveled and the weapon, object or special power used, with a percentage success which is indicated on the screen and depends on the location and coverage. There is, however, an important variation on the theme, the named mechanics Bravado: when one of our characters kills an enemy, the three coins are restored and can therefore perform his actions again.

It is obviously possible to mix this feature with other traditional tactical elements, with the use of dynamite and the aforementioned special powers: each member of our gang has one, whether it is teleporting by exchanging his position with that of an enemy or a companion (very useful for flushing out opponents) or performing a flurry of shots, throwing darts in various directions or occur in a mad and violent charge, machete in hand.

There is no doubt that the guys at Ice Code Games have been able to perfectly manage all these aspects, without creating balance problems. The plant appears very solid right from the start, but the level of difficulty intermediate (hard), the one imagined by the developers as the most representative of the experience, it seemed to us really too difficult: the enemies inflict enormous damage, seemingly discounted shots are failed, our units cannot heal each other, there are only two slots for consumables and very often the death of a character can make it absolutely impossible to complete the mission.

This type of hardcore setting requires an excessively cautious approach, which dilates the times a lot and which, in general, does not contribute to the quality of the experience, which on the contrary turns into an obsessive trial & error in which automatic saves are reloaded, created by the game itself after each shooting. To this are added some shortcomings related to the quality of life of the experience: there is no possibility of undoing the last action if you have made a mistake, nor can you escape to reorganize yourself. The uploads are also long even with an SSD, we are about 40 seconds.

Hard West 2 looks like a title discreet from a graphic point of view, with well-made characters, good animations, a freely adjustable view and an adequate overall rendering. The sections on the open map are frankly ugly to see, but the actual missions present a good variety of scenarios and in some cases take place “on the move”, see for example the assault on trains: the solutions adopted in this sense appear interesting and there is no doubt that the title has character.

There is nothing extraordinarily sophisticated, so it is normal for the game to run at 60 fps in 4K and with all settings at maximum, without major problems, but lowering the resolution does not mean big sacrifices. As for the audio, the soundtrack affects less than we imagined but the dialogues in English appear well interpreted, although some phrases are repeated in a somewhat obsessive way during the gameplay.


Hard West 2 is a very solid and very challenging strategy, characterized by a beautiful story and interesting adventure aspects, which, moreover, can affect the other elements of the experience. The exploratory phases in the open map are not beautiful to see and often express sketchy and simplistic mechanics, but once on a mission the situation changes radically and all the tactical RPG peculiarities of the title developed by Ice Code Games come to light. That said, the difficulty level can be excessive, forcing you to proceed through a thousand trials and errors by reloading your bailouts: not an insurmountable problem if you like challenges, but we would have preferred a less ruthless approach.

Hard West 2, the review of the ruthless strategy between gunslingers and demons