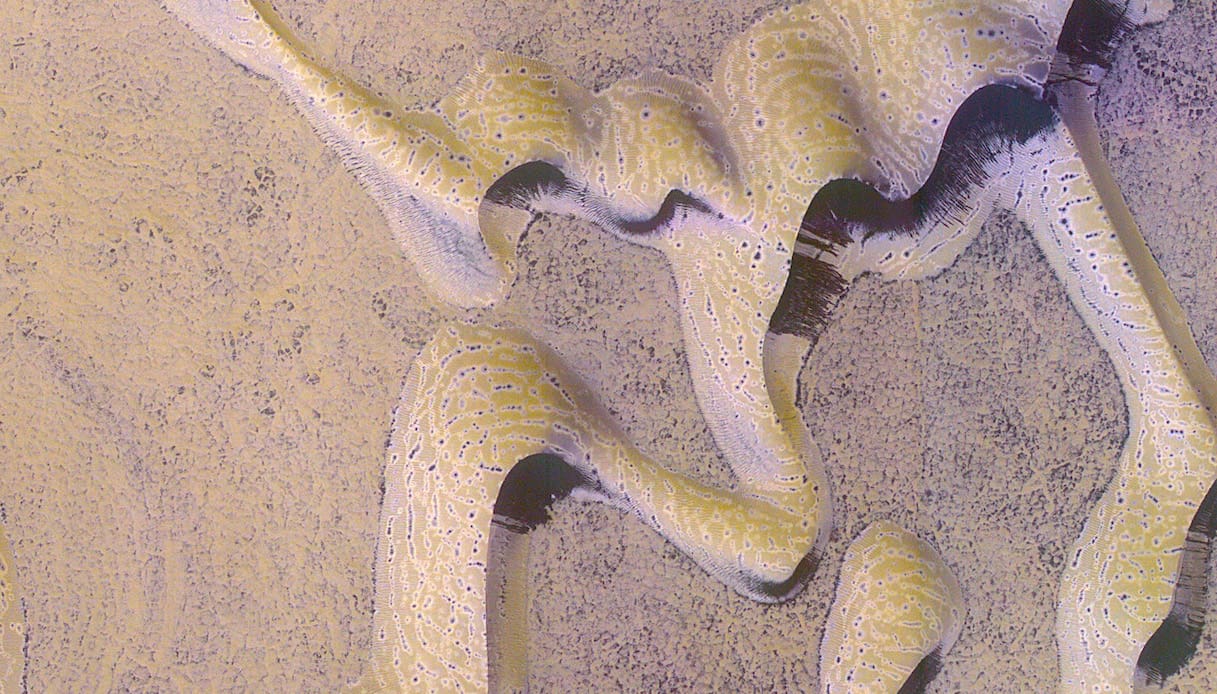 how is theMartian winter? All the information that scientists had gathered so far did not prepare us for the incredible spectacle that NASA’s Mars Reconnaissance Orbiter (MRO) captured a few weeks ago: the soil of the Red Planet, inside one of its craters, presents very particular looking dunesin the midst of their seasonal change.


The dunes photographed on Mars

The Red Planet is still source of great surprises. Thanks above all to the enormous commitment of NASA researchers and international experts who work tirelessly to analyze the data from Mars. And just recently we have received some images that are incredible: they portray the dunes present inside the Kunowsky crater, which in the photo wind like long ribbons of sand with a rather bizarre appearance. It is all the work of seasonal changes, which on the Martian soil gives life to real works of art.

“In late winter, when it is first lighted, the carbon dioxide freeze at high latitudes it will start to sublimate” – writes the HiRISE team, responsible for this breathtaking image – “On sand dunes, defrost points and mass waste on steep slopes produce amazing patterns”. It is therefore a natural phenomenon : Sublimation occurs when an element is in a solid state turns directly into a gas, not passing from the liquid state. The patterns born from the thawing are, in fact, something that cannot go unnoticed.

The shot of the dunes of Mars comes from HiRISE cameraone of the most powerful instruments installed on the multipurpose probe Mars Reconnaissance Orbiter (MRO), launched by NASA in 2005 to study the Red Planet in depth. HiRISE (High Resolution Imaging Science Experiment) is a telescope with a high resolving power that also works in the infrared spectrum. It is managed by a University of Arizona research teamwho identified this splendid image on November 29, 2022, sharing it with the public only at the beginning of the new year.

HiRISE, your most spectacular photos

HiRISE has already given us many more great photos of mars, providing scientists with numerous very important data to better understand the conformation of the Red Planet. In recent weeks, there have been multiple arrivals images of the Martian winter on which, finally, the experts have some more information. The snowfalls are truly spectacular, formed by two different types of snow (some flakes are composed of water, but most are instead characterized by carbon dioxide). And the thaw phase is even more surprisingwith geyser eruptions allowing gases collected under the surface to emerge into the atmosphere.

Particularly suggestive is the shot, dating back to last October, of a martian landscape found inside some of the craters that dot the northern plains of Arabia Land – one of the regions richest in canyons and rock formations. Here, scientists have found mysterious deposits with a rather bizarre shape, located only in the southern part of the craters (and only in those with a diameter greater than 600 meters). This is probably the sublimation of ice-rich material, and the presence of horizontal streaks it could represent a “time travel” between sublimations of different eras.

It appeared on the soil of Mars: but what is it?


Our social media pages here and other pages on related topics here.https://prress.com/related-pages/