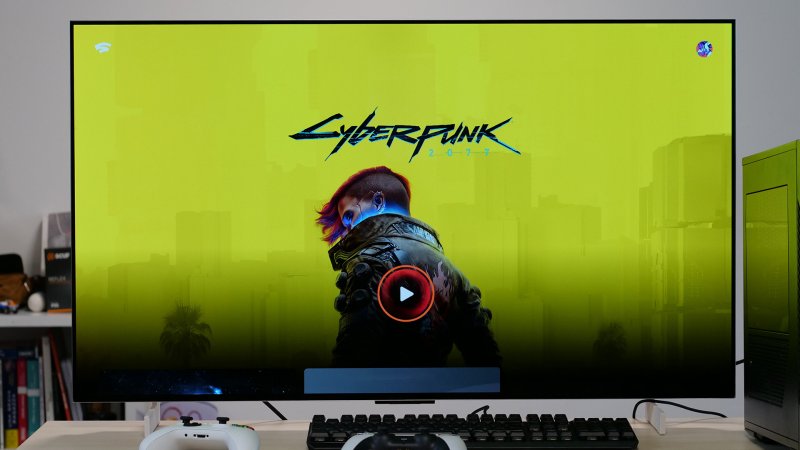 We reviewed the new LG OLED evo C2 4K TV, in the brand new 42-inch format, with HDMI 2.1 and full VRR support through FreeSync and G-Sync.

During the very hot summer of this year, we were able to get our hands on the chat LG OLED evo C2 TV to test it with a classic review. We are talking about the direct successor of the LG OLED C1 reviewed last year, but to which it adds a new cut, exactly the 42 inch object of this article, and a renewed panel. We therefore approached the product aware of being in front of a quality TV, designed not to miss anything for those who want to use it for gaming, whether on PC, PS5, Xbox Series X | S or in the cloud.

Before starting, let’s do the usual little review on technology: compared to classic LCDs, OLEDs are made up of millions of self-illuminating pixels, without backlighting, therefore, which can be turned off individually by the software to reproduce perfect blacks and precise colors. Within the LG line-up, the C2 series is characterized by panels of 42 “, 48”, 55 “, 65”, 77 “and 83” with Ultra HD resolution, OLED evo technology and Brightness Booster, refresh rate at 100/120 Hz, Alpha 9 processor and the new version of the proprietary operating system, webOS 22.

The Alpha 9 processor, in particular, reaches its fifth generation this year, improving image management by artificial intelligence. However, it is on the upscaling front that it seems to have taken the greatest steps forward, reducing the steps to render a native image at 480p in 4K. THE list prices they amounted to between 1,399 euros for the 42 “and 3,499 euros for the 83”, but as usual they are subject to constant discounts, even very generous ones.

Will LG’s C series confirm the new models among the best TVs for value for money? You will find the answer by continuing to read.

Let’s start with the usual roundup of Technical specifications: LG OLED42C26LB is the 42-inch cut sold in the list, as we said, at € 1399. The software side comes with webOS 22, an operating system that has greatly improved the usability of the user interface, while the Alpha 9 Gen 5 processor, as we said, it boasts a better management of the electronics. Magic Remote with video pointer controlled by a gyroscope, quick selection of the most popular streaming services and NFC for pairing with a smartphone confirmed. Backward compatibility with Dolby Vision IQ, Dolby Atmos, HDR10 Pro and Filmmaker Mode, OLED Motion Pro for moving images and support for Bluetooth Surround Ready to use LG Bluetooth speakers as wireless rear channels.

Among the useful features for gaming we have well 4 HDMI 2.1 inputs and the ability to use cloud gaming services such as Stadia and GeForce NOW without resorting to external devices.

The design of the C2 series remains rather conservative and takes up that of the models that preceded it. The edges are therefore thin, with metal frames and the electronic components housed in a sort of plastic case that in the 42 “model seems larger than it actually is. The small size of the panel, in fact, makes the rear almost completely occupied by this white element, to which we can attach some appendages useful to keep the cables in order. The 4 HDMI 2.1 inputs are flanked by 3 USB inputs, an Ethernet port, the Digital Audio Output (Optical) and the Headphone output. the connectivity section, the presence of a WiFi network card and the availability of integrated Alexa, Google Assistant and LG ThinQ virtual assistants.

The smaller dimensions lead to a change in the table stand, which now consists of two plastic plinths that slightly raise the TV: once again it is therefore a bit invasive to house a soundbar in front of the TV without a cabinet. Wall mounting is obviously possible thanks to the support for the VESA mounting system.

The color is vanilla white in two distinct shades for the plastic and metal parts of the back, the latter slightly rough. However, there is also a dark gray version, for those who prefer it. The measures without stand they are 932 x 540 x 41.1 mm, with a weight of only 9 kg. The two stands are very light, about 150 grams each, which raise the TV from the surface by just under 13 mm.

In reviewing new televisions, by now you know it well, we at Multiplayer.it focus yes onoverall user experiencebut we reserve an eye to the operation of the television with the various gaming machines.

So let’s start with theinterface, since LG webOS 22 has made some small changes to what is seen on C1. The most important change is the possibility of using more than one profile, while in the old model only one could be associated. Some menus have since been modified and in general we have noticed a greater fluidity in navigation. The connection to virtual assistants is immediate, AirDrop works well and the store has a good number of apps. The settings have been slightly modified, but the adjustments remain thorough and well distributed. The homepage allows you to interact with the sources in order to correctly set even those that are not automatically recognized (but they are very few).

No problem with the game console, which are automatically identified. Whether it’s PS5, Xbox Series S, PS4 Pro, Xbox One X, Nintendo Switch or PC, in all cases the TV recognized the platform we were playing on. The Game Optimizer returns to its place and is enriched with the possibility of changing the general settings of the images without going through the dedicated menu. The input lag is in the order of milliseconds, with moving images always fluid even at 120 FPS. Good work of the upscaler, which uses the new artificial intelligence to offer a clear image, without graphic artifacts, even if clearly softer than that of native 4K content.

HDR 10+ is still not supported, but using theHDR standard, however, valid response times and very low input lag are maintained. The brightness reaches values ​​higher than the C1 but it is in the dark that this TV gives its best. The 4 HDMI inputs are all 2.1: this means that they allow you to use Auto Low Latency Mode (ALLM), eARC, Ultra HD signals at 120 Hz and Variable Refresh Rate, whether it is NVIDIA G-Sync, AMD FreeSync or HDMI Forum VRR.

Google Stadia And NVIDIA GeForce NOW have a dedicated app built into the TV (also available in C1 models) and benefit from the ease with which you can connect a bluetooth controller from the appropriate LG menu. The access interfaces should be revised a bit, rather cumbersome to use via remote control, but otherwise they work well. Instead, we are waiting for the arrival of Xbox Cloud Gaming, which for now seems to be exclusive to Samsung TVs of 2022.

Our tests have shown how the LG OLED evo C2 is excellent for any use, thanks to a panel capable of reproducing perfect blacks and faithful colors, with a high viewing angle. The interpolation system for handling images in motion reduces blur during sporting events, but can now only be used at 60 Hz (in the C1 even at 120 Hz). Even with past shows and TV series, the upscaling system confirms the good performance seen with games. As we said, HDR 10+ support is missing, while gray uniformity isn’t always flawless, with some bands of color peeking out. But apart from that, there are no major flaws to report on this TV, both with the integrated streaming platforms and with Blu-ray content.

The C2 series confirms the quality of LG’s OLED panels, which with this new 42-inch cut forcefully enters a new market segment. Once again the value for money is excellent and the performance is satisfactory for any type of use. All the features that made us appreciate the C1 series in the gaming field are also re-proposed: low input lag, 4 HDMI 2.1 inputs, G-Sync and FreeSync certification. The new panel then improves the brightness, which is now above the average of OLEDs, while the image quality remains excellent for contrast, color rendering and response times. In short, a good update that keeps the quality bar high at LG, even if for those who already own a recent model, the time has not yet come for the upgrade.