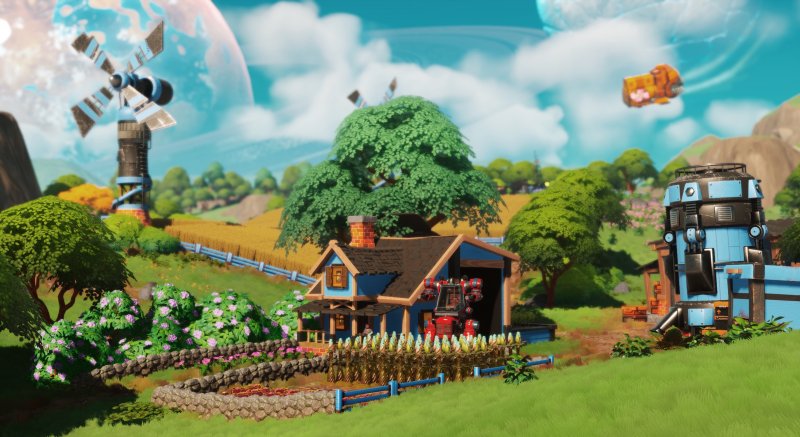 Lightyear Frontier allows you to carefully manage an alien farm aboard a mech, what more could you want from life? Let’s discover this strange experience.

Among the innovations presented during the Xbox & Bethesda Showcase, Lightyear Frontier also appeared, a strange project that could have gone unnoticed in the midst of the announcement and trailer party staged on 12 and 14 June, but which deserves to be explored. The team Frame Break invited us to a presentation of their particular project, allowing us to gather more information and exhibit it in this first one Lightyear Frontier previewa game that could prove to be one of the best surprises in the crowded arena of sandbox adventures with management elements.

To tell the truth this is not the first time we have talked about this project: it was initially announced during the event dedicated to ID @ Xbox in 2021, but this year it presented itself in a much broader and more complete form, making us think to a publication not too distant in time, even if there is still no official release date.

There presentation of Lightyear Frontier took place remotely and we were able to see a gameplay live with the game that was managed by the developers of Frame Break, so there has not yet been a way to try the gameplay firsthand, but what was shown still allowed to build an idea about this game and place it firmly among the many interesting projects currently in development within the ID @ Xbox program dedicated to indie titles.

Development seems to be well underway and the game systems are at least fixed and largely in place, but for the moment we have to limit ourselves to a few considerations on the basic idea and the impressions derived from the few minutes of gameplay that we have been able to see, trusting in other more in-depth visions in the coming months.

The idea behind Lightyear Frontier is bizarre, but not entirely new: it is about managing a sort of farm located on an alien planet, which we have already seen in several other indie titles within the tide of sandbox adventures with survival elements we have witnessed over the years.

So what makes this Frame Break game unique? The fact of using a fully customizable mech for the construction and care of fields and farms: the quid specific to the game, therefore, derives from the vehicle used, a fundamental tool that almost becomes the protagonist of the whole question. In short, it is another experimentation derived from the mixture of genres, which in this case also draws a pinch of Mechwarrior and spreads it in a game context that has absolutely nothing to do with robot-based warfare from fighting, actually placing itself in stark contrast to this vision.

Interestingly, the developers wanted to play with a laudable idea: essentially staging a game Pacific and replacing weapons with tools for farming. It is not a way of saying: in fact, from the sides of the mech emerge what look like real machine guns and pistols, only that instead of firing bullets they throw seeds, water and plow the earth, or bring feed for the animals or build fences. and fences. “Put some flowers in your cannons: the game”, in short, but not only, because Lightyear Frontier is still a survival and the challenges are not lacking, but these focus above all on the need to protect our business from the numerous environmental threats that may emerge. on the alien planet, while it seems that the gameplay is totally devoid of the typical needs of basic survival, such as eating and drinking, focusing exclusively on the well-being of crops and livestock.

The most characterizing element of Lightyear Frontier is therefore the mech, which in this case rises to the role of tractor and all-round agricultural tool, with an enormous possibility of customization and modification. This is a point on which the developers have particularly focused: everyone can modify the vehicle according to their tastes and needs, although obviously the use of some basic tools is practically mandatory. By playing it is possible to unlock new objects and equipment to be applied and the appearance of the vehicle changes substantially based on the changes made, making the relationship with the mech a fundamental point of the entire game. The team explained that there are also phases in which it is possible to get off the vehicle, but this serves above all to increase the identification in the game world and does not have a particular value in the gameplay: in fact, in Lightyear Frontier we face every situation from the interior of the cockpit.

Although there seems to be one too history Full of mystery in its premise, the illustrated gameplay mechanics focus primarily on growing and rearing for commercial purposes.

Despite the good idea of ​​the peaceful message behind the project and also the reaffirmed desire to stage a sort of “sustainable” spatial agriculture, it is not yet clear how these profound concepts are then made explicit in the game.

What we could see are the basic mechanics of the creation and care of cultivated fields, the possibility of domesticating alien animal species for farms and then the purchase and sale of products with commercial ships that periodically visit the planet, in what seems to be the typical perspective of incremental gain and economic growth, more than a search for planetary balance based on agriculture. However, there is still time to explore these aspects, which could emerge more clearly from the game in the final version.

The mixture of features also emerges from the structure of the game and its possibilities of use: as reported by the developers, Lightyear Frontier will in fact also have a story to follow, based on the discovery and mysteries of the alien planet, as well as the ability to play single and cooperative multiplayer for up to 4 players. Hard to say, at the moment, if Frame Break will be able to match all the elements in the best way, because it seems to point in somewhat different directions from each other.

As for the storytelling, it has been reported that it is a story of discovery and exploration based on the “mystery”, which can also be concluded but without this precluding the possibility of continuing in the management part, which in any case continues independently from the story. Put like this, one thinks a little of Slime Rancher’s setting, for example, which has rather vague narrative references but which are linked to the discovery of new areas of the game world, pushing for exploration.

For what concern four-player cooperative multiplayer, it seems to be above all a marginal addition to the game structure. Lightyear Frontier is however designed to offer perfectly enjoyable single player gameplay, so the basic experience should remain this, with the possibility of sharing with other players some phases probably more related to the collection of resources and management of agricultural activity. In any case, even on these aspects we must await further information from the team.

Despite belonging to an overpopulated set of games such as the sandbox adventure with agricultural declination, Lightyear Frontier still has some very interesting specific characteristics. Here too, innovation derives above all from bizarre mixes or the introduction of apparently dissonant elements: in this case it is the tech-tractor, an omnipresent vehicle and true protagonist of the action. Putting together the customization of a technological vehicle with cultivation and breeding is certainly interesting, as well as the exploration of the alien planet, the survival elements and the pacifist message behind the project paint an original picture, which we can’t wait. to admire more closely and in detail.

Lightyear Frontier, the preview of an agricultural sandbox aboard mechs