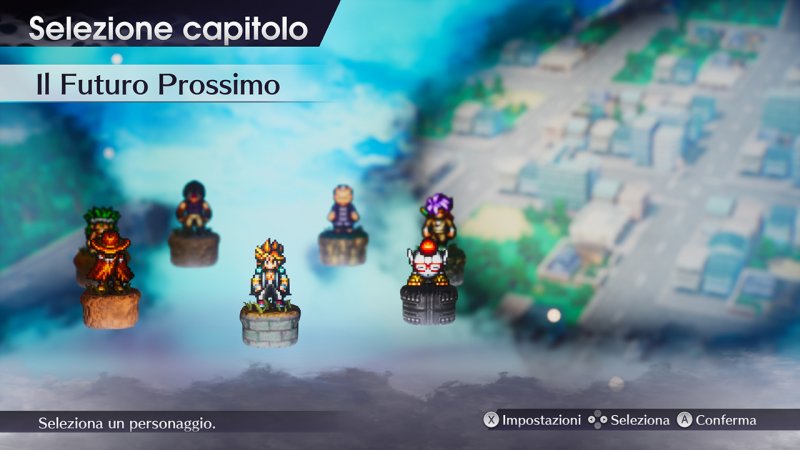 No need to go around it: Live A Live will be engulfed by the release of Xenoblade Chronicles 3, which will arrive on our real or virtual shelves only a few days later. In reality, however, JRPG lovers could easily play both, because Live A Live is not a very long experience, despite being very replayable, and we know this because it was already released in 1994 for SNES, and what will arrive in a few weeks. on Switch is a remake in HD-2D, a graphic style that caught on after being cleared by Octopath Traveler. With the latter Live A Live has more in common than you think, starting with the fact that Octopath Traveler had also worked Takashi Tokita namely the original director of Live A Live, but also of Chrono Trigger, Parasite Eve and the 3D remake for Nintendo DS of Final Fantasy IV. Is this curriculum enough to tickle your palate?

If not, we recommend that you read this tried Live A Live, because the new Square-branded RPG is a real gem that might deserve your attention. Or not. Indeed, it is complicated.

We assume that Live A Live is not an RPG, but a collection of “micro” RPGs, selectable from a home screen and divided by epochs: Today, the Near Future, the Wild West, and so on. Each of these stories has its own protagonist, its own narrative and apparently they are all disconnected. Not only. Each is characterized by particular elements of gameplay or specific structures that guarantee a good variety to the whole experience. In this trial we will focus on four stories that we have already completed, postponing our overall evaluation to the future review: our goal, at this moment, is to make you understand whether or not the very particular structure of Live A Live is for you.

And no, we mentioned it before, but Octopath Traveler is very different, for better or for worse. In that RPG, the eight protagonists shared the world and the era, and in fact the player could recruit the other characters during the campaign of every single hero.

Live A Live does not encounter the same narrative dissonance – that is to say, characters who live their stories as if they were alone, although they are followed by the other seven protagonists who become only tools of gameplay – because the characters of the new RPG, existing in different eras , they have no way of meeting. Almost. Anyone who knows the ’94 title – which some time later was translated as an amateur – knows what we’re talking about. Here, this aspect of the game works a bit like the Octopath Traveler endgame, but we’ll be back in the review phase.

For now, in short, know that the protagonists of these seven initial stories do not meet and live perfectly autonomous adventures that you can nibble because they last a few hours each.

Live A Live is a real remake: Tokita had the game redesigned, which in ’94 was certainly not among the best exponents for SNES, with a HD-2D among the most beautiful, defined and colorful that we had the pleasure of seeing on the screen of our Switch OLED. More accurate in the animations and in the detail of the sprites than Octopath Traveler, and devoid of that haze that darkened the images of Triangle StrategyLive A Live delivers a perfect … modern vintage experience, so to speak.

We began our test by choosing the chapter Todaybecause we remembered its peculiar characteristic in terms of gameplay: it all revolves around a lone fighter who wants to become the best in the world, defeating all participants in a martial arts tournament.

If it reminds you of Street Fighter, well done, you hit the bull’s-eye: Today it mimics the fighting games at matches of the time, but offers an opponent selection screen that in some ways reminds you of Mega Man. Chosen the challenger, you end up straight in the arena to fight him in a turn-based dynamic. The protagonist – which you can rename – has a couple of initial skills, but can learn the ones with which the enemy will hit him, even if he were a Blue Wizard from Final Fantasy. Rounds are punctuated by a styled reload time Active Time Battleand each ability has a range, an area of ​​effect and, in some cases, is associated with a natural element such as fire, water, or wind.

By choosing the opponents in the right order, skills are unlocked that guarantee us an advantage in subsequent boss fights, up to the final clash with the tournament champion. Today he gives a general smattering of the combat systembut we do not deny that from the narrative point of view it is really inconclusive, and it lasts very little: we completed it in less than an hour.

Instead the other chapters we played surprised us with the maturity and originality of the narrative. In the Wild West, we have put ourselves in the shoes of a wanted man who ends up in a town on which a band of brigands has set their sights. Begged by the locals, including a foul-mouthed innkeeper, we’ll team up with the bounty hunter who’s after us to save the city. In terms of gameplay, the Wild West is divided into a timed exploration phase, in which we will have to scour the city for resources and choose which inhabitants to place traps based on their aptitudes. The second phase, as you can imagine, is the fight with the bandits.

Thanks to the music of Yoko Shimomura, at the steady pace of narrative that generates a real tension, the Wild West is a linear but compelling chapter that reveals another important feature of Live A Live: choices matter. In some moments, the selected equipment or the answers decided in a conversation, can change the outcome of the story.

This is better understood The sunset of Japan Edoa chapter that in some respects seemed to us a kind of prototype of Sekiro: Shadows Die Twice, as our goal, as a Shinobi, will be to infiltrate a castle to save a prisoner. It seems like a linear assignment, but the chapter is really very complicated. Assume that you can choose whether to complete it all in stealth, without ever killing anyone, or by exterminating every opponent. In the first case, you will have to play cunning, use the ability to blend in and deceive enemies, and use every consumable or equipment to overcome the boss fight mandatory. In the second case, you can give yourself crazy joy in fighting: the protagonist starts with a handful of special skills, learning more as he increases in level.

The peculiarity of this chapter is that it is immense and labyrinthine. The remake implements an unprecedented radar that suggests the direction to take, but the level design it is extraordinarily intricate. You will then come across at various significant moments: for example you will have to choose whether or not to free a prisoner, who in the first case will join you as the second party member, and there will be many optional puzzles to solve to get your hands on weapons and high-quality armor, including a super-tough optional boss.

The sunset of Japan Edo is the chapter in which we spent the most time: it took almost three hours to complete, several loadings of the save due to Game Over, and we have not seen everything it had to offer us. As we said before, Live A Live is an experience replayable, if only because of the choices you might want to make again in a later game. This is demonstrated by the last chapter we played before writing this tried: The Near Future. If so far we had played a chapter focused on combat, one on strategy and one on exploration, The Next Future is the most RPG of all. The protagonist can read the thoughts of others, and this greatly complicates the interaction with the various NPCs, also because in this chapter we fight and solve puzzles and puzzles, explore and upgrade the equipment as in a finished RPG. We do not want to tell you more because it is really a gem.

As you may have understood, we are liking Live A Live a lot, but we are not sure that the objectively meager combat system and the fluctuating quality of the individual narratives can convince the most savvy players to dare to buy, not with a big hit like Xenoblade Chronicles 3 around the corner. On the angularities we found – for example, i frequent uploads every time you switch screens, particularly annoying in Japan Edo – we will come back in the review because we want to frame their weight on the overall experience first, but in the meantime we can only advise you to try the Demo available on the Nintendo eShop, which allows you to play three chapters (Imperial China, The Sunset of Japan Edo and The Distant Future) and to get a first idea of ​​the technical sector and the multifaceted gameplay of this remake.

We were curious to play the Live A Live remake – the original was one of the weirdest RPGs of the 1990s, and it’s no wonder that Square didn’t risk localization at the time. Now that the public is much more open to experiments and Japanese role-playing games in general, this little gem could have the feedback it deserves. So far we have played about half of the adventure, appreciating the realization that modernizes the technical sector without betraying its vintage nature, but we must admit that the fluctuating quality of the individual campaigns could represent an important obstacle for those looking for a more cohesive and organic RPG. In the meantime, try the Demo: we’ll talk about it in our review in a few weeks.

Live A Live, the tried and true of this SNES-era gem before the review